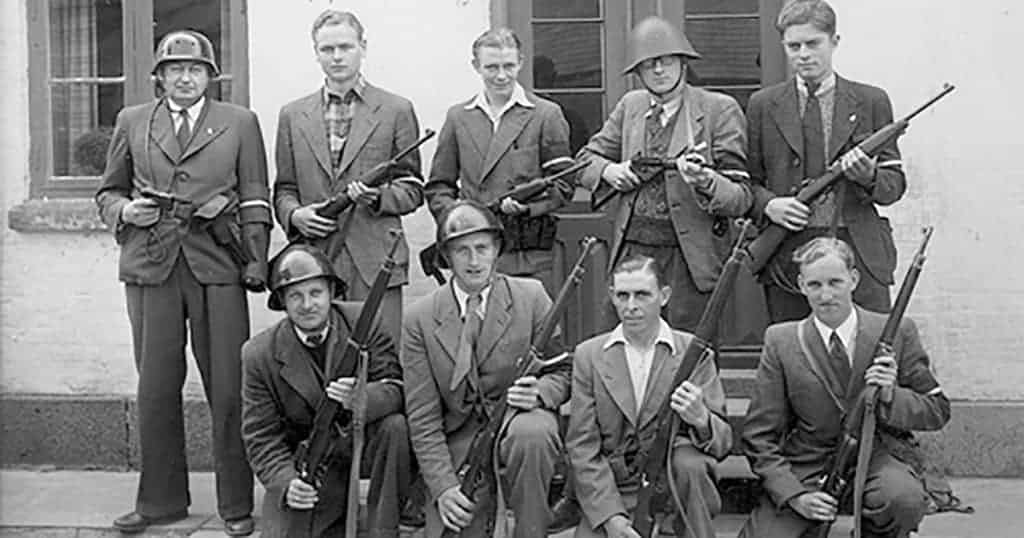 9. After Her Mother Was Sent to Auschwitz, This Teenager Joined the French Resistance

By 1942, Charlotte Noshpitz’s father was in hiding. Later that year, her mother was sent to Auschwitz. Her father and brother fled to Nice in southern France, and were followed soon thereafter by Charlotte. She joined the local Resistance when she was seventeen years old.

After her father stumbled upon her stash of weapons, Charlotte arranged false identity papers to get him out of the country and out of her hair. She told him that she would go with him to Switzerland, but when they reached the border she handed him to a guide to escort him the rest of the way, bid him adieu, then turned around and returned to the fight.

8. This Teenager Guided Fugitives to Safety Beyond German Reach

Charlotte Noshpitz’s Resistance work included stashing and transporting weapons and money, often beneath the Germans’ noses, and creating and supplying fake documents. She also helped save fugitives from the Nazis by guiding them to the French border and safety beyond in Switzerland or Spain. Her charges included many Jewish children.

She also took part in direct action such as planting explosives – including a bomb that went off in a Paris movie theater where SS members were gathered. During the 1944 Paris Uprising that preceded that city’s liberation, Charlotte was in the thick of the fighting.

7. After the War, This Heroine Befriended Ernest Hemingway, and Went on to a Rewarding Professional Career

For her wartime services and efforts that helped save the lives of so many, Charlotte Noshpitz was awarded a slew of decorations. They included the Médaille de la Résistance, the Croix du Combattant Volontaire de la Resistance, the Médaille des Services Volontaires Dans la France Libre, and the War Commemoration Medal. After the war, Charlotte resumed her education. She studied psychology at the Sorbonne, art history at the Louvre, and languages.

She sailed to America to further her mental health studies and to examine a model health treatment center in Kansas for replication in Paris. During a rough crossing of the Atlantic, she met and befriended Ernest Hemingway. After her return to France, she married in a ceremony attended by her Resistance compatriots, and settled into family life and a rewarding professional career.

6. Before He Became the World’s Most Famous Mime, This Teenager Used His Miming Talents to Save Jewish Children

Marcel Marceau (1923 – 2007) was the world’s most famous mime, and his white-faced character, the melancholy vagabond Bip, became known around the globe. Before he was famous, Marcel spent his teenage years hiding from the Nazis and fighting for the French Resistance during WWII. As part of his underground activities, Marceau managed to save numerous Jewish children from the Nazis by smuggling them to safety. He had aspired to become a mime ever since he first saw a Charlie Chaplain movie as a child. Miming talent came in handy to distract and quiet the tiny tots as he smuggled them past German guards and across the border to safety in Switzerland.

Born Marcel Mangel, the future star was sixteen when WWII began. When the Nazis conquered France, Marceau’s father, a kosher butcher, had to hide the family’s Jewish origins and fled with them to central France. Marcel’s father was captured, however, and sent to his death in Auschwitz. The teenager moved to Paris, and with forged identity papers in which he adopted the surname “Marceau” after a French Revolutionary War general, joined the Resistance.

5. After Using His Miming Skills to Save Children, Marcel Marceau Used them to Become a Global Star

Marcel Marceau’s mime skills were not only good enough to save children from the Holocaust, but to also made him a star. After the Allies landed in France, Marceau gave his first major performance before an audience of 3000 soldiers in a liberated Paris. He then joined the Free French army for the rest of the war. His talent for languages and near fluency in English and German got him appointed as a liaison officer embedded with George Patton’s Third US Army.

After the war, Marceau had a long and eventful career. His accomplishments included winning an Emmy Award, and getting declared a national treasure in Japan despite not being Japanese. He also became a member of the Berlin Academy of Fine Arts and forged a decades-long friendship with Michael Jackson, who borrowed some of Marceau’s moves in his dance routines. In 2020, Resistance, a biographical drama about his life, starring Jesse Eisenberg as Marceau, was released.

4. This Resistance Heroine Grew Up in an Antifascist Home That Sheltered Fugitives From the Nazis

Dutch Resistance Heroine Truus Menger-Oversteegen was born into a left-wing working-class family in 1923. She grew up in an industrial district north of Amsterdam known as the “Red Zone” for its residents’ political bent. Before WWII, her family actively assisted an organization known as Red Aid, which helped save Jewish and political refugees from the Nazis by facilitating their escape from Germany.

Truus grew up accustomed to fugitives hiding in her home from Dutch police, who were likely to return them to the German border and hand them to the dreaded Gestapo. She was thus already an antifascist long before the Germans conquered the Netherlands in 1940, when Truus was fifteen-years-old.

3. This Heroine Joined the Resistance When She Was Sixteen

When the Nazis began deporting the Netherlands’ Jews, the country’s communists and socialists came together in February 1941, to lead a massive strike in protest. It was one of the few successful nationwide protests against the Germans, and it encouraged the rise of the Dutch resistance.

The widespread protests against the deportation of Jews led the Nazis to ramp up their repression and brutality, in order to cow the Dutch into obedience and toeing the line. The repression increased the alienation of the Dutch people, and drove them in increasing numbers into the arms of the budding resistance. Truus Menger-Oversteegen joined the Dutch Resistance when she was sixteen. She began by distributing leaflets and illegal newspapers, and offering assistance to fugitives seeking to save themselves from the occupiers.

2. An Attempt to Save Jewish Children That Ended in Tragedy and Massacre

In 1941, following a massive Dutch workers’ strike, the Nazi occupation authorities cracked down hard. That further radicalized Truus, and spurred her to join an armed resistance that engaged in direct action against the Germans. After receiving military training and learning how to operate a firearm, Truus’ early assignments included flirting with and seducing German soldiers, and leading them into the woods, to be killed by her comrades. Before long, the teenager was shooting Germans herself, and using explosives to blow up bridges and railroad tracks.

Life as an armed partisan was a difficult row to hoe, full of dangers and marked by tragedy as often as success. Early on, Truus was present at a failed mission to save Jewish children from German clutches. It ended with the fugitives caught in searchlights in an open field, where most were massacred, mown down with machine guns.