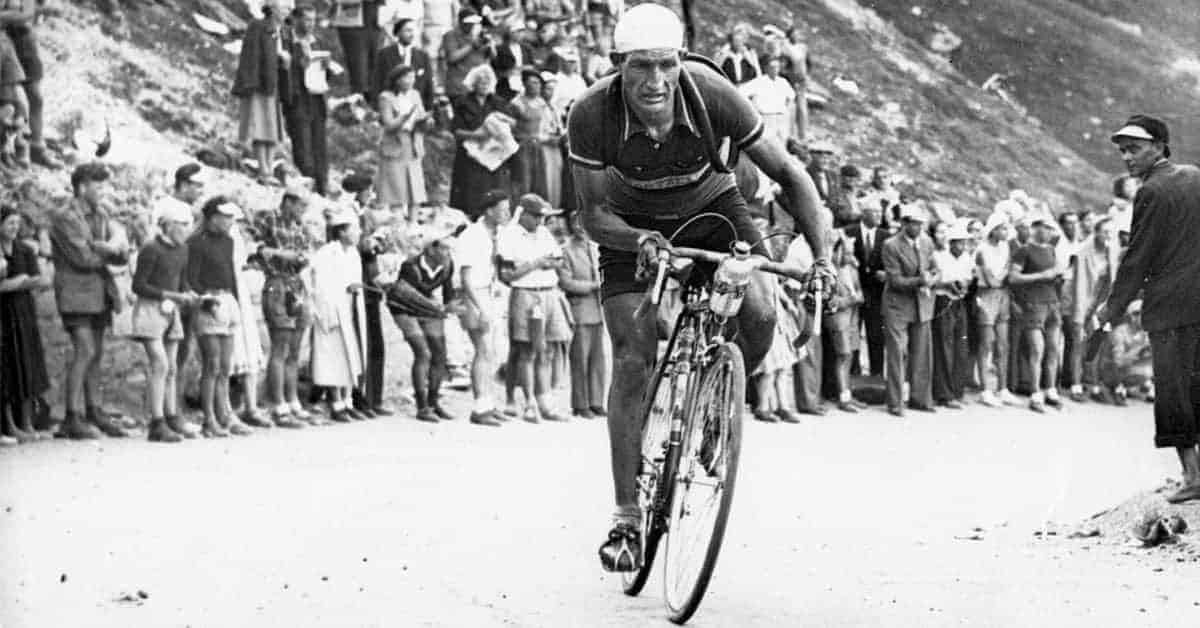 For many, cycling the narrow, winding roads that cut through the rolling hills, fruitful vineyards and undisturbed villages of the Tuscan countryside is the stuff of dreams. The region attracts thousands of cyclists each year, from lycra-clad amateurs to sturdy, seasoned professionals. Even Obama couldn’t resist taking a two-wheeled excursion in May 2017 (though whether or not his accompanying security brief added to the tranquility of the trip is a different matter altogether). In Tuscany’s lush, idyllic landscape, however, history runs as deep as the soil. And there’s one story—involving a Tour de France champion in Nazi-occupied Italy—whose roots run deep in Tuscany’s collective memory.

He might be little known outside Italy, but Gino Bartali (nicknamed Gino the Pious because of his strong Catholic beliefs) redefined the idea of self-sacrifice in elite sport. And the idea is prevalent. No matter what the sport, after every victory—and, for that matter, close loss—we hear athletes talk about the sacrifices made to get them where they are—those made by family, by friends, not to mention those they made themselves. Hand in hand with these self-deprecatory speeches go acts of charity and public appearances, done just as much for self-promotion as for the promotion of the sport.

We shouldn’t be too surprised about this. Sport is big business and promotion definitely has its place. But while today’s internationally renowned sports stars might actively seek out opportunities to get their human side across in their persona and their brand, Gino Bartali was from another generation. For, as has only come to light in recent years, away from his public, professional persona, Gino Bartali was a man who risked his life to save up to 800 Jewish strangers from the Nazi persecutions. What’s more remarkable: he then refused to ever talk about it, asking not to be remembered for what his conscience had driven him to do, but to be remembered just for what he was: a cyclist.

Gino Bartali was born in Ponte a Ema, Florence on July 18, 1914. With three brothers and a sister, Gino soon distinguished himself through his physicality. Broad, strong and athletic, Gino would have excelled in whatever sport he chose. But at 13 he started working in a bike shop, and before his 14th birthday, he’d made the jump from repairing bikes to racing them. Even as an amateur his talents were abundantly clear. But despite his early successes in the 1935 Giro d’Italia and 1936 Giro di Lombardia, he almost gave up the sport after losing his brother in a racing accident. But he persevered, and just one year after turning professional, aged just 22, he was the national champion.

As a three-time winner of the Giro d’Italia and two-time winner of the Tour de France, Gino Bartali was the greatest cyclist Italy had ever produced up until that time. But it was by winning the 1938 Tour de France that he really established his legacy. An awful lot rode on Bartali’s success: Mussolini was eager to prove that eugenically the Italians were on a par with Hitler’s “master race”. Of course, Hitler had already been humbled two years earlier: forced to look on as Jesse Owens sprinted his way into first place—and into the history books—in the 1936 Olympic Games. But this didn’t matter for Mussolini; to his mind, by winning the Tour, Bartali would prove Italian eugenic superiority and improve the country’s standing in world sports.

The Tour de France champion was expected to dedicate his win to Il Duce. But he didn’t want to associate himself with Mussolini’s fascist regime, so, taking a massive gamble, he refused. He had his reasons. The regime would publish its Manifesto della Razza (“Manifesto on Race”) mere months after Bartali’s victory. This publication emphasized the Italians’ Aryan origins, and set the precedent for a series of persecutory Italian race laws which prohibited marriage between Jews or Africans and Italians, legalized the confiscation of Jewish property and barred Jews from working in certain professions. The laws were broadly unpopular. But to openly criticize them could prove fatal, as another prominent cyclist, found dead by the side of the road, had found out.

Although war broke out the next year, life went on mostly as normal for Bartali and many others living in Italy. But things went from bad to worse after September 8, 1943, when, following the Allied landings in the South, Italy switched allegiance. Mussolini was freed from prison and reinstated as a puppet ruler, causing the mass exodus of those who had opposed him or stood to suffer under his new regime. This included the Jewish population, for whom life had been far from easy since the late 1930s. However, with German forces occupying Italy from Autumn 1943, they now faced the very real prospect of deportation to one of the many concentration camps across Germany, Austria and Eastern Europe. Bartali now felt compelled to act.

As a young man working at the bike shop, Bartali had become close friends with Giacomo Goldenberg, a local Jewish man. After the implementation of anti-Jewish laws, Bartali sought out Goldenberg’s family and offered to harbor them first in his apartment and then, when things became to dangerous, in a neighboring basement. There they would stay until Florence’s liberation in August 1944. Bartali was taking an incredible risk; the crime, if discovered, would have earned him (and, in all likelihood, his wife and young boy) a bullet in the skull. What’s incredible is that Bartali never spoke publically about what he did; the story coming to light only as researchers started sifting through his diary in 2010, 10 years after his death.

Bartali had several run-ins with the Nazi occupiers. But when stopped, he would ask that they didn’t touch his bicycle as it had been delicately calibrated to maximize speed. On one occasion he was arrested by Mussolini’s Blackshirts, the paramilitary thugs of the fascist regime, and taken to the Florence’s Villa Triste; a villa which —in fitting with its name “the Sad Villa”—had a macabre reputation as a place of torture and execution. There, Bartali was given an ultimatum: avoid certain convents during his training or there would be serious consequences.

With the war’s conclusion, Bartali had his first chance to defend his title in the 1947 Tour de France. He didn’t win, but he returned the next year to take the yellow jersey, becoming the first—and so far only—man to win the tour after a 10-year hiatus. And his win was, perhaps, as important for Italian national history as it was for the history of cycling: at a time of serious political unrest, his victory in the 1948 Tour de France gave the country the morale boost it needed and quite possibly averted a civil war.

He may have been Italy’s undisputed cycling champion during his youth, but Bartali was largely overshadowed in his later years by Fausto Coppi: Italy’s other preeminent cyclist with whom he had a fierce and publically captivating rivalry. Bartali retired in 1955, aged 40, after suffering a career-ending road accident. He spent the rest of his life in Florence, living off modest wealth in the company of his wife Adriana, his two sons and his daughter. And it was here in his beloved city where he died of a heart attack in May 2010, aged 85,

As a man, Gino Bartali was as reticent as he was reverent, never once boasting about his achievements. He also refused interviews, saying that he had been driven entirely by his conscience and did not want his actions to be documented. This meant that his actions were only recognized posthumously: Yad Vashem (the Holocaust Memorial and Educational Center in Jerusalem) awarding him the honor “Righteous Among the Nations” in September 2013. When asked about his father’s modesty, Andrea Bartali quoted his father as saying: “You must do good, but you must not talk about it. If you talk about it you’re taking advantage of others’ misfortunes for your own gains.”

He may have been the Vatican’s favorite sportsman, and a hero of the Italian South, but Bartali never saw himself as a hero. And nor did he want to be remembered as one, wishing instead that any recognition he might have been related to his sporting achievements rather than his wartime actions. “Real heroes are others”, he said, “those who have suffered in their soul, in their heart, in their spirit, in their mind, for their loved ones. Those are the real heroes. I’m just a cyclist.”