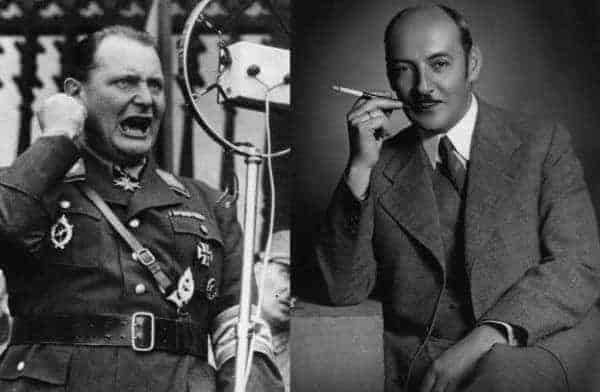 The life of Albert Goering is an extreme example of family members going down different paths. While his older brother Hermann was one of the leading Nazis, Albert detested the fascist party and risked his life to save dozens of people from death during World War II. The story bears a resemblance to the activities of Oskar Schindler, but while the latter’s good deeds are well documented, Albert Goering’s heroics are relatively unknown.

Albert was born in Berlin in 1899 and was six years younger than his infamous brother Hermann. Despite their contrasting beliefs, the two brothers were quite close, and Hermann probably saved his younger sibling’s life during the Second World War. Hermann was an extrovert who exuded confidence and fearlessness. In contrast, Albert was shy and withdrawn. At the Nuremberg Trials, Hermann asserted that he was the optimist of the two while his brother was pessimistic and melancholic.

Both men fought in World War I, but while Hermann returned home a hero and a national celebrity, Albert, as always, remained in the background. He was shot in the stomach on the Western Front and was extremely fortunate to survive. Albert married twice by 1923, and at this stage, his older brother had joined Hitler and was wounded during the failed Beer Hall Putsch.

This apparently resulted in Hermann’s lifelong addiction to morphine, and Albert was dismayed at his sibling’s activities with the Nazis. He used to complain that Hermann would come to a bad end if he continued his involvement with Hitler. Alas, the older Goering continued his rapid rise through the Nazi ranks and by 1933, he was the second most powerful man in Germany.

Albert moved to Austria in 1933 as a protest against the Third Reich. His peace didn’t last long, as Germany annexed Austria in March 1938. Albert did everything he could to arrange visas and money for fleeing Jewish families in Vienna, and used his name to defy German officers openly.

The first recorded instance of him using the family name to help Jews occurred around this time. In Vienna, he discovered Nazi officers forcing elderly Jewish women to scrub the streets on their knees. A baying mob appeared and hurled stones and other missiles at the unfortunate ladies. Albert took off his jacket and took the place of one of the women. Irate SS officers asked to see his papers, and once they saw the Goering name, they left him alone.

Another incident occurred in Vienna soon afterward. A group of thugs hung a sign around an old woman that said ‘I am a Jewish sow.’ Albert came to her aid and took off the sign. He then punched two Gestapo officers. If anyone else did this, it would have been a death sentence, but once again, having the Goering surname came in useful.

The world was plunged into war in 1939, and Albert continued to risk his life helping others. Once the war began, he landed a job as export director at Skoda Works (a huge arms manufacturer) in the Protectorate of Bohemia and Moravia. In this instance, Albert didn’t need the family name to get the role, as he had developed a reputation in his own right.

The Gestapo suspected the younger Goering of assisting Jews and placed him under surveillance. There is little doubt that if Hermann weren’t his brother, Albert would have been executed during the war. Although Albert was fundamentally different to Hermann in almost every way, he knew he could rely on his older sibling for protection. However, at family gatherings, neither man brought up politics, and they never spoke about what they were doing.

Throughout the course of the war, Albert was insubordinate and rude to Nazi officers. The Gestapo arrested him several times, but he was always released after a phone call to Berlin. One of his most daring acts during World War II involved driving a convoy of trucks to Theresienstadt concentration camp. He told a Nazi official that he was Albert Goering, head of Skoda Works and that he needed workers. He filled the truck with Jewish prisoners, went to the woods and released everyone.

This was among the last good deeds he performed as the Germans finally grew tired of his meddling. A note from a Nazi Governor in Prague in 1944 requested permission to take Albert to the Reich Security Head Office in Berlin for interrogation. Berlin issued an order to shoot him, so the younger Goering fled to a safe house.

The Allies defeated the Nazis in 1945 and captured Hermann on May 7. Albert presented himself to the American Intelligence Service in Salzburg two days later and met his brother in the U.S. interrogation center in Berlin. It was the last time the Goering brothers spoke to one another.

Albert told the investigators about his role in the war, but no one believed him due to his last name which was synonymous with evil. He produced a list of 34 people he saved and added other details such as professions, residence, and citizenships. It wasn’t enough to gain him freedom, so he spent another 15 months in prison before an interrogator named Victor Parker finally believed Albert due to a stroke of good fortune as Parker recognized one of the names of the rescued people.

Unfortunately for Albert, the Americans sent him to a prison in Prague to ensure there was no evidence against him in Czechoslovakia. He was put on trial, but luckily, resistance fighters and members of the Skoda factory arrived to praise the defendant. Albert was acquitted in March 1947, but sadly, the rest of his life was a sorry affair.

After returning to Salzburg, Albert found the Goering name to be a curse as he was unable to find work. His remaining years were spent as an alcoholic social pariah, forced to survive on food parcels from grateful Jews he had saved. He died from pancreatic cancer in 1966. Today there is a debate as to whether Albert should be posthumously awarded the State of Israel’s highest honorary award where recipients are known as ‘Righteous Among the Nations.’