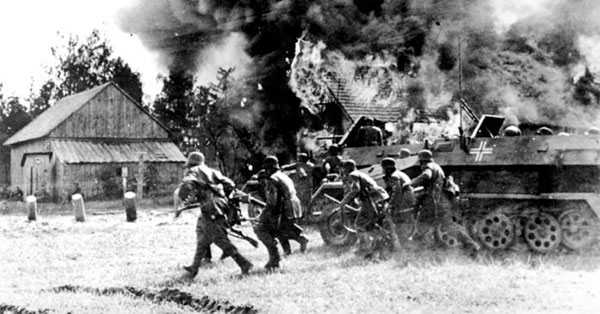 The invasion of the USSR by the Germans remains the largest invasion (in terms of manpower) ever attempted. The Germans sent over 4 million soldiers and support troops into battle. Compare that to the other famous invasion from World War II, Operation Overlord (the Battle of Normandy or D-Day), which had around 160,000 troops, and you’ll get a scope of the strength of the German Army at the beginning of Operation Barbarossa.

The invasion of the Soviet Union was a great success for Nazi Germany to begin with. With the number of soldiers they sent into battle, and the conditions of the relations between Germany and the USSR before the beginning of the invasion, their success isn’t all that surprising. Prior to the invasion of the Soviet Union, the Nazis and the Russians had signed several treaties, including one of non-aggression. Despite those promises, the Germans started planning Operation Barbarossa in July 1940.

Initially, the Germans were able to conquer and occupy several important economic areas that the USSR relied on. However, the Germans severely underestimated the Russians, and would soon be turned back after the Battle of Moscow which was fought in the late months of 1941 into January 1942. After that, the Hitler continued to push forward with his plans to take over the USSR, most of which failed and would have been ineffectual in any event.

The result of Operation Barbarossa in terms of its effect on World War II in general was devastating for the Germans. It took away resources from other fronts of the war, and more importantly, it removed the USSR as one of its allies.

From a casualty perspective, the fight between the Germans and the USSR was horrifying. In battles alone, the estimated casualties combined to equal over 5,000,000 dead or wounded. At one point, the Germans were able to capture 5 million Soviet soldiers, which were not considered prisoners under the Geneva Convention. The vast majority of those prisoners were never returned alive. 3.3 million of the Nazi prisoners were deliberately starved to death, along with an unknown (but presumably monstrously high) number of civilians. Over 1 million Soviet Jews were slaughtered by Nazi death squads.

World War II remains the most devastating war ever to be fought. The lowest estimates available state that 60 million people were killed during World War II, and most often historians will tell you that that number is much higher, some going as far as saying it was closer to 100 million. In terms of total loss, at least 3 percent of the total population of Earth died in the war.

While Operation Barbarossa is but one part of World War II, in many cases it represents Nazi Germany’s first major set back. Because of its failure to take over Moscow and the USSR, and the amount of resources it threw at the Eastern Front, its resources in other areas of war were spread thin, allowing for victories in years to come for the Allies.