The Nazi Party Member Who Secretly Saved Over 7,000 Jews 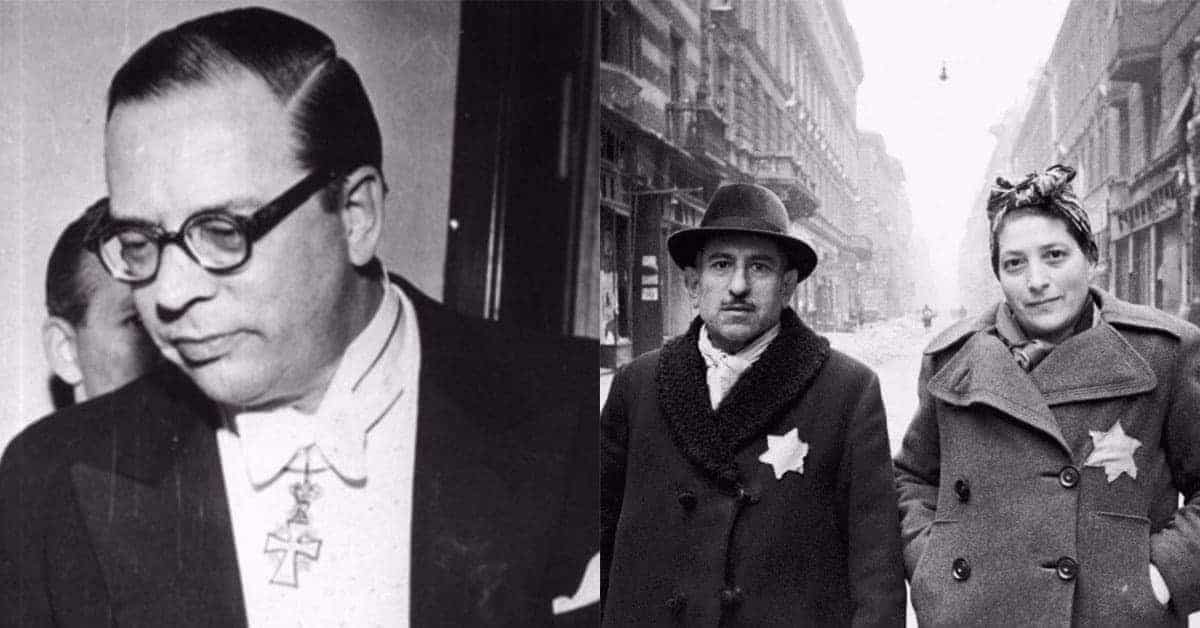 The Nazi Party Member Who Secretly Saved Over 7,000 Jews

World War II is laden with unsung heroes, and Georg Ferdinand Duckwitz certainly falls into that category. While the remarkable deeds of people like Oskar Schindler are well known, Duckwitz’s role in saving 7,000 Jews in Denmark is less so. He was one of those brave Germans that looked to damage the Nazi Party’s plans from within and risked his own life out of a desire to do the right thing.

A Brief History of Jews in Denmark

Denmark’s Jewish community was formed towards the end of the seventeenth century which makes it one of Europe’s most recent. Denmark’s monarchy invited Jewish merchants and financiers to help boost the economy. The majority of those that accepted the invite were Sephardic Jews, people that had been expelled from the Iberian Peninsula in the late 15th century.

It was by no means a mass exodus; there were only 1,700 Jews in Denmark in the middle of the eighteenth century for example. Jewish residents were granted full emancipation and citizenship in 1849, and as a result, the community grew in size and prospered. By the 1930s, there were over 6,000 Jews in Denmark. The nation’s Jewish population was a sign of Denmark’s desire to integrate, but the outbreak of World War II threatened the peaceful relations that had built up between Jews and non-Jews.

Nazi forces occupied Denmark in April 1940 and remained in the country until the end of the war. Initially, at least, the Nazis were willing to cooperate with the Danish government, so the Danes retained some control over their nation. Danish citizens were allowed to conduct their daily business, and in return, the Danish government allowed Nazi soldiers to come and go as they pleased; they also supplied them with produce. As a result, the Danes were able to avoid enacting anti-Jewish laws for a few years.

By early 1943, it was apparent that the Nazis were suffering huge casualties. The Danish resistance seized the opportunity to increase its anti-German strikes and sabotage as it was convinced that the Nazis would soon be defeated. The Danish government refused to comply with German demands to institute curfews for Jews, so the Nazis ended their liberal approach and made plans to deport Jews to concentration camps.

Dr. Werner Best, the Reich’s representative for occupied Denmark, sought to implement the Final Solution in the nation. There were approximately 7,800 Jews in the country, and they seemed destined to meet the same terrible fate of the Jews that Best had deported from France and Poland.

However, the Danish Jews had a powerful ally who was willing to risk his life to ensure they found sanctuary in Sweden. Georg Ferdinand Duckwitz was a German diplomat who had lived in Denmark since the 1930s. While he was a member of the Nazi Party in its early days, he grew disillusioned once he learned about its violent intentions. Clearly, he hid his distaste for the regime well because he was given the task of overseeing shipping between Germany and Denmark during the war. Duchwitz used his position to save thousands of people by bravely putting himself at risk.

Preventing the Final Solution in Denmark

Duckwitz worked with Best in Denmark from 1942, but he was forced to act decisively to save thousands of lives little more than a year later. The Nazis declared a state of emergency in August 1943; this resulted in the Danish government resigning in protest, and King Christian X stated that he was a Nazi POW in Denmark. Best asked Hitler for permission to begin the Final Solution in Denmark soon after. When Duckwitz heard about the request on September 11, 1943, he knew he had to act fast.

He spoke to Best who claimed his message to Hitler wouldn’t have any real consequences. Oddly enough, Best even allowed Duchwitz to fly to Germany to try and suppress the document, but when he got there, he learned that Hitler had already approved the order. Time was running out for Denmark’s Jews, so Duchwitz flew to neutral Sweden (although it collaborated with Germany) and told President Per Albin Hansson all about the plans. The Nazis were going to start the deportation on October 1, so there was no time to waste.

Hansson assured Duchwitz that the Jews would be well cared for should they arrive in Sweden. Duckwitz also made contact with the Danish resistance which prepared hiding places for the escapees. They also contacted Swedish fishermen who agreed to transport the Jews to Sweden’s side of the Oresund Strait. Perhaps unusually, Best continued to keep Duchwitz informed of the Nazi’s plans even though he almost certainly knew of the escape attempt. Perhaps Best wanted to keep his position in Denmark as he believed the Nazis were going to lose the war. By keeping Hitler informed and turning a blind eye to the activities of Duckwitz, he was covering all bases.

On September 28, Duchwitz leaked word of the plans to the chairman of the Danish Social Democratic Party, Hans Hedtoft. He, in turn, contacted the Danish resistance and C.B. Henriques, the leader of the Jewish community. Finally, Henriques informed Dr. Marcus Melchior, the acting chief rabbi. On the following day, September 29, which was the day before the Rosh Hashanah services, the rabbi told the congregation all about the plans and urged them to inform friends and family.

When the Nazis launched their raid on October 1, they were shocked to find only a few hundred Jews and countless empty homes. They were unable to find their quarry because a rapidly organized plan was in place. First of all, over 7,000 Jews hid in carefully selected locations and eventually, the Danish resistance helped them escape to Sweden by boat. The entire operation lasted three weeks, and all elements of Danish society helped. Churches published articles protesting against the German plans, students helped in the rescue operation, and the nation’s universities closed down for a week while King Christian X spoke openly about his objections. So where did the escapees go and how did they escape their pursuers?

Swedish Scientists to the Rescue

The Germans believed the Jews were escaping via fishing boats, so they sent patrolmen to as many vessels as possible to search the boats for escapees. If boat owners tried to disguise their human cargo, the German’s sniffer dogs would uncover the Jews who would surely have died. Over the course of three weeks, Swedish fishing boats safely carried 7,200 Jews across the water without getting caught. How?

Swedish scientists came up with a brilliant idea to deceive the dogs. They created a mixture of dried rabbit blood and cocaine and gave each fisherman a handkerchief coated in it. When the Germans stopped the boats and spoke to the owners, the fishermen would casually hold the handkerchief. The dogs would race towards the handkerchief and ignore any other lingering smells on the boat. Their sense of smell was destroyed by the cocaine temporarily so they would find nothing of interest on the boat.

Unfortunately, around 474 Jews did not escape Denmark. While some ignored the warnings, others were simply too old and infirm to leave. Those that were captured ended up in Theresienstadt concentration camp. However, the Danes refused to give up on those in the camps and sent them food packages. The Danish Foreign Ministry pestered the Nazis with warnings and demanded that a delegation be allowed to visit the prisoners. Ultimately, no Danish Jews were sent to Auschwitz, and when the Swedish Red Cross successfully negotiated the release of Danish Jews, 423 survivors were sent to Sweden.

Even though almost all of Denmark’s Jews escaped, Best still told his superiors that the Final Solution had been carried out. Of course, he didn’t lie when he told them that Denmark had no more Jews. After the war, Duckwitz was extremely humble and did not regard himself as a hero. In fact, he said: “I do not think my life is more important than the lives of 7,000 Jews.” He was the highest-ranking Nazi officer involved in such a large-scale rescue.

Duckwitz continued to work in the German foreign service after the war. He was the West German ambassador to Denmark from 1955 to 1958 and later served as his nation’s ambassador to India. Duckwitz was placed in the prestigious position of Secretary of State in West Germany’s Foreign Office in 1966 and remained there until he retired in 1970. Best testified at the Nuremberg Trial of the Major War Criminals and avoided a death sentence after the war. He was released from prison in 1952 and died in 1989.

Duckwitz received the Righteous Among the Nations title from the Israeli government in 1971, and he died in 1973. Duckwitz’s quick actions, lack of regard for personal safety, compassion and bravery were instrumental in saving over 7,000 people during World War II; he deserves to be remembered as one of the great heroes of the conflict.

YAD Vashem – Denmark and the Holocaust

Los Angeles Times – How The Danes, And A German Turncoat, Pulled Off A World War II Miracle

History Channel – Why 90 Percent of Danish Jews Survived the Holocaust