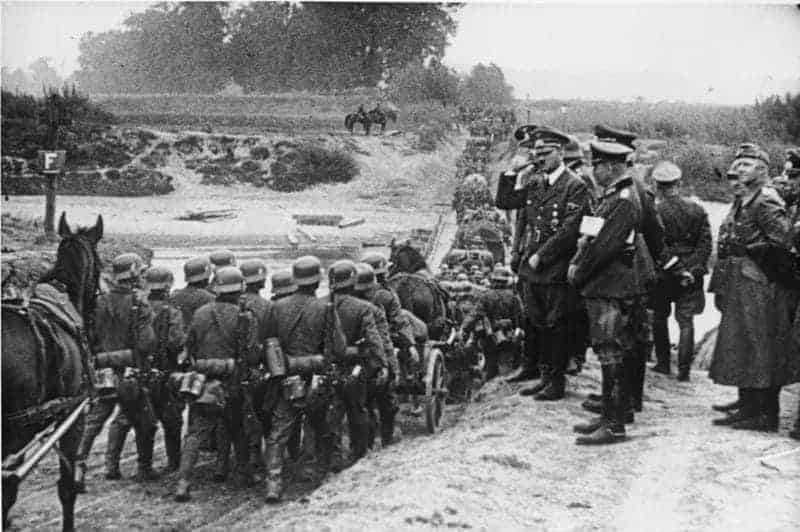 On this day in 1939, German forces invaded Poland by land and from the air, as Adolf Hitler seeks to regain territory lost after WWI. Hitler used the alleged plight of Germans living in Poland to justify his invasion, in fact, it was the first stage in his master plan to dominate Europe. He had first stated his ambitions in his book Mein Kampf.

The German invasion of Poland saw the Nazi army used the “blitzkrieg” strategy. The blitzkrieg tactic was heavily reliant on speed and superior. The Germans used airpower, to batter the Polish defenses. They used the feared Stuka dive bombers to launch devastating air raids. These planes were later used to destroy much of Warsaw. The Nazis also relied heavily on tanks and their Panzers punched through the Polish defenses. Once the German forces had plowed their way through, the infantry moved in, picking off any remaining resistance. The Polish army though brave and large was too immobile to deal with the speed of the attack. Many Polish units still relied on the horse as their main means of transport and cavalry still played a significant role in the army. The German onslaught was so quick that the Poles often did not have time to respond. After quickly destroying the Polish airforce the German Stuka Dive bombers were used to devastating effect.

The Polish army made several severe serious errors at the start of the invasion. They decided to take the Germans head-on with cavalry units advancing concentration, rather than falling back to more natural defensive positions. They did not have any defensive positions to fall back on. The outmoded thinking of the Polish commanders coupled with the antiquated state of its military meant that they could not withstand the German Blitzkrieg, the Poles are defeated by the Germans in less than a month. The Soviet’s as part of the Molotov-Ribbentrop pact seized the eastern part of Poland when the Polish army had already been defeated.

Once Hitler had conquered the country. He divided it into districts under the control of a Nazi Governor. German troops terrorized the civilian population and many Jews were massacred. Any civilian who resisted the Germans in any way could be killed on the spot. The Soviets who seized eastern Poland were just as brutal as the Germans. The occupation of Poland by the Nazis was an unmitigated disaster for the Poles. No country suffered more than the Poles in the Second World War, some estimates, suggest that five million citizens of Poland died from 1939 to 1945.

News of the German invasion shocked the world. The British and French had warned the Germans that if they invaded Poland then they would declare war. A day after Hitler ordered his forces into Poland, London, and Paris declared war on Germany. The Second World War had begun and it was to claim the lives of 50 million people around the globe and change the world forever.