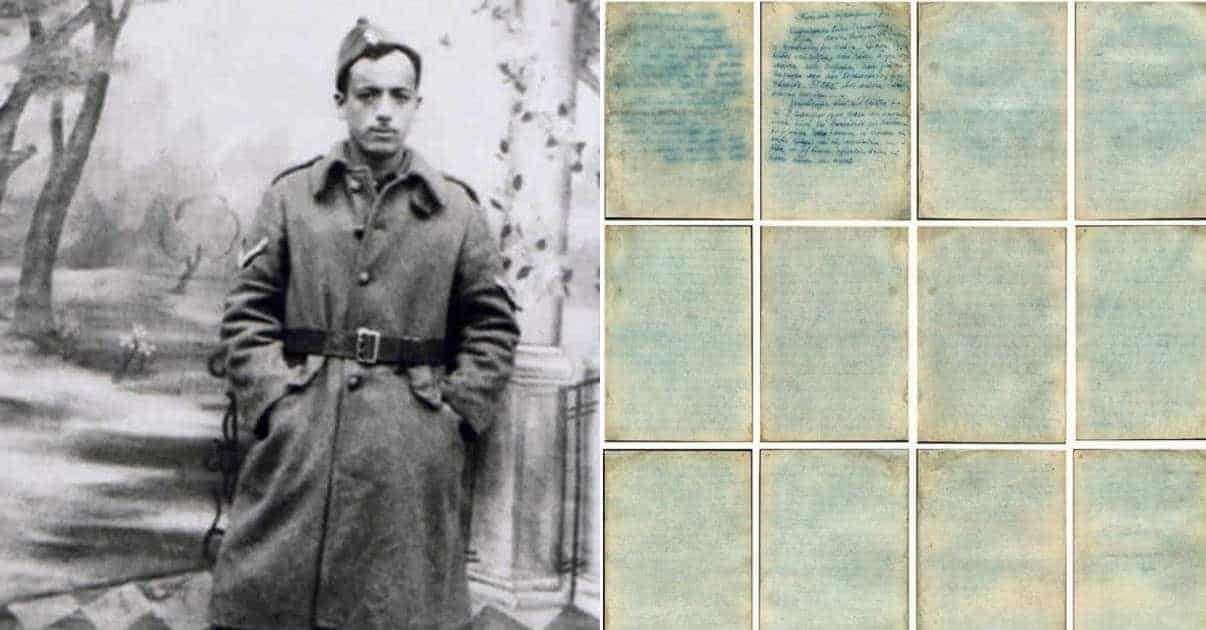 In November 1944, Marcel Nadjari, a Greek Jew, secretly scribbled his account of the Nazi atrocities ongoing in the Auschwitz concentration camp. Nadjari worked as one of the Sonderkommando, a group of press-ganged Jewish prisoners forced to clean up the evidence of the victims of the gas chambers. Nadjari believed his death was eventually inevitable- and would only be hastened if his account were discovered by the Nazis. So he sealed the letter in an old flask and buried it near one of the death camp’s crematoria, in the hope that someone would find it after the war.

Thirty-six years passed. Then, a young Polish forestry student excavating in the forest around Auschwitz came across the flask buried 40 cm below the surface. Badly damaged after nearly forty years underground, the letter was initially unreadable- until recently, when Russian historian Pavel Polian and a young associate managed to enhance digitally, and so read Nadjari’s letter. What it letter reveals is a raw and heartfelt account of events in the camp- and the thoughts and feelings of those who witnessed them- and somehow survived.

Jews had lived in the city of Thessaloniki in Greece since the late second century BC. Unlike in many areas of Europe, they were accepted members of the community, living peacefully with their Christian neighbors. In 1940, around 50,000 Jews were living in Thessaloniki. Amongst them was 23-year-old merchant Marcel Nadjari, who lived with his parents and his younger sister, Nelli.

Then, the Second World War broke out. Along with 12,898 other Jewish men, Nadjari joined up to help defend Greece from invasion. The Greek defensive campaign was short-lived, and by April 1941, the fight for Greece was over. For Greece’s Jews, the real horrors of the war now began. In Thessaloniki, in July 1942, after a year of fear and restriction, all the Jewish men between 18-45 were ordered to present themselves in the town square. From there, they were taken to labor camps. On March 15 the following year, the first of nineteen trains left the city, carrying the rest of Thessaloniki’s Jews to Auschwitz and Birkenau.

Marcel Nadjari’s parents and sister were amongst the deportees of 1943. However, Nadjari himself was not shipped out until April 1944. Once at Auschwitz, he found himself recruited into the Sonderkommando, the 2,200 strong body of Jewish prisoners forced to aid the Nazi death squads- or face immediate death themselves. It was the Sonderkommando who had to greet and reassure new prisoners. They collected up the discarded possessions and shorn hair of the new intake -and led them to the gas chambers. They then stripped the bodies of the dead of gold fillings and valuables before cremating them and disposing of the ashes in a nearby river.

Sonderkommando were kept healthy with better rations and living conditions. This advantage meant that they had a chance of staying alive, for even a life amongst the horrors of Auschwitz meant something. However, they also lived with the knowledge that the Nazis could cull them at any moment and replace them with a fresh intake of prisoners. For the Sonderkommando were the bearers of their master’s secrets. When the Sonderkommando of Auschwitz learned of a proposed cull in October 1944, they rebelled; a futile event which was crushed and resulted in the death of 451 of their number. Marcel Nadjari survived because he was not amongst the rebels.

Only 110 of the Auschwitz Sonderkommando are known to have survived the war. Most of these survivors have disappeared from history, for few wished to publicize the horror of their lives in Auschwitz- or what they were forced to do to survive. However, in November 1944, a month after the unsuccessful coup, Marcel Nadjari, risked his own life to pen a thirteen-page letter that was his testimony to the Nazi’s atrocities, which he scribbled down on scraps of paper and buried.

In 1980, a Polish forestry student was working in the forest around the ruins of Auschwitz- Birkenau’s crematorium III. 40 cm below the surface, they came across a thermos flask, sealed with plastic. Inside were thirteen scraps of paper, covered with writing that was so severely damaged by the damp that only 10% could be read. The undeciphered letter was placed in the Auschwitz Museum archive where it stayed until the museum agreed to allow Russian historian Pavel Polian to examine it.

Polian spoke of the letter’s degradation on the radio in 2013. Shortly afterward, Alexander Nikityaev, a young IT expert contacted him. Nikityaev spent 2013 using Adobe Photoshop’s digital imaging software to try and enhance the letter enough for it to be readable. After applying a number of colored filters, he managed to improve the faded writing, making it 90% legible. Nikityaev returned the letter to Polian, who found that unusually, it was written in Greek. Translation revealed the author to be Marcel Nadjari. In late 2017, Polian published the letter’s contents in the Munich Institute of Contemporary History’s quarterly magazine.

The letter began with an introduction written in German, Polish and French asking the finder to pass it on to the Greek embassy, from where Nadjari hoped it would be forwarded to his friend Dimitrios Stefanides. Then came the main narrative which was Nadjari’s account of ‘life’ in Auschwitz and the Nazi atrocities. “We all suffer things here that the human mind can not imagine,” Nadjari explained before describing in painful detail the crimes of his Nazi captors- and the Sonderkommando’s unwilling role in covering them up.

Nadjari’s account confirms the manner in which the Nazi’s murdered incoming Jews. ‘The crematorium is a big building with a wide chimney and 15 ovens,’ he explained ‘Under a garden, there are two enormous cellars. One is where people undress, and the other is the death chamber. People enter it naked and once about 3,000 are inside it is locked and they are gassed. After six or seven minutes of suffering, they die.’

The Nazis disguised the underground chamber as a shower block. ‘The gas canisters were always delivered in a German Red Cross vehicle with two SS men,’ Nadjari explained. “After they were all naked, they [the prisoners] went further into the death chamber, where the Germans had laid pipes on the ceiling to make them think they were preparing the bath, with whips in their hands, ” Then: “the Germans forced them to move closer and closer together, so that as many as possible could fit in, a true Sardinian death, then the doors were hermetically sealed.”

“After half an hour, we opened the doors, and our work began. We carried the corpses of these innocent women and children to the elevator, which brought them into the room with the ovens, and they put them in the furnaces, where they were burnt without the use of fuel, because of the fat they have.” Nadjari concludes this part of his letter by describing how each human being was reduced to “about 640 grams of ashes.”

However, the letter’s significance goes beyond confirming known facts.

Significant Evidence of the Holocaust

Nadjari’s letter is highly significant to the history of the holocaust. It is the last of only five buried accounts by former Auschwitz Sonderkommando to be unearthed. Zalman Gradowski, who was killed in the revolt of October 1944, was the author of the oldest letter while the others, penned by Zalman Lewental, Leib Langfus, and Chaim Herman were written in early 1945. These accounts, written while their authors were in the camp rather than retrospectively, provide “the most central documents of the Holocaust” in Mr. Polian’s opinion.

However, besides providing details of events in the camp, the letter tells us a great deal about the workings of Nadjari’s mind and his mental state as he attempted to survive his hell-like existence. Nadjaris’ accounts reveal guilt. “If you read about the things we did, you’ll say, ‘How could anyone do that, burn their fellow Jews?'” he wrote. The experience took its toll on him as he contemplated ending his life: “Many times I thought of coming in with them [to the gas chambers],” he wrote.

What kept Nadjari from death was something that the other letters lack according to Polian: a driving need for revenge. By the time he penned his testimony, Nadjari knew that his family was dead. Enquiries amongst other Greek Jews within Auschwitz had confirmed that his mother, father and sister Nelli had all perished in 1943, the year they arrived in the camp. “I wanted to live to avenge the death of Papa and Mama, and that of my beloved little sister, Nelli,” stated Nadjari. He believed his letter was the closest he would get to that vengeance. “I am not sad that I will die,” Nadjari wrote, “but I am sad that I won’t be able to take revenge like I would like to.”

Marcel Nadjari expected the Nazi’s to kill him because of what he had witnessed “We have to leave the earth because we know so much,” he explained, writing of himself and his fellow Sonderkommando. However, against his expectations, Nadjari did live. When the allies drove the Third Reich back 1945, the Nazis deported Nadjari to Mauthausen concentration camp in Austria. After its liberation, he returned to Greece.

With his family dead and only 2000 of the Jewish community of Thessaloniki still alive, Nadjari emigrated to America, settling with his wife Rosa in New York where he worked as a tailor. The couple had two children, one a little girl, born in 1951, who was named after Nadjari’s beloved sister. However, in 1947 before he left Greece, Nadjari wrote another account of his time in Auschwitz and published it, such was his determination to tell his story to the world. He must have believed his letters were lost. Indeed they were for him. In 1971, Marcel Nadjari died, aged just 53- nine years before his compelling and rare testimony resurfaced.

Athens Insider: The Forgotten History of the Jews of Thessaloniki

Wikipedia: History of the Jews in Thessaloniki