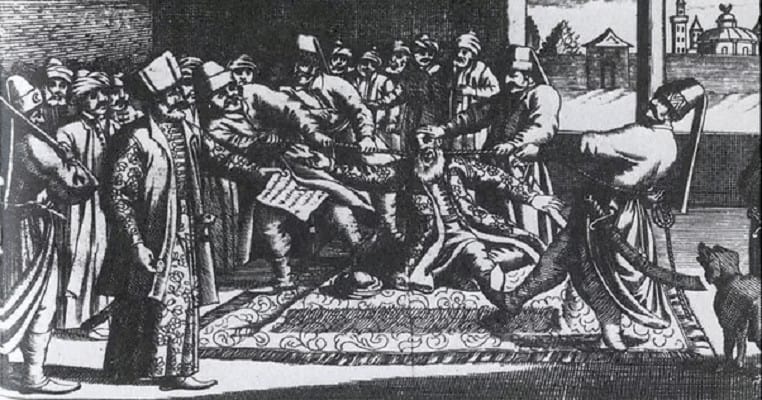 The Ptolemaic Dynasty’s most famous ruler, Cleopatra VII, carried on the family’s tradition of incest by marrying her younger brother, Ptolemy XIII. Also carrying on another family tradition, this one of infighting, the siblings fell out, and Cleopatra was forced to flee Egypt to Syria. She soon returned with an army, and waged a civil war that tore the kingdom apart. The conflict seesawed between brother and sister/ husband and wife, until Julius Caesar arrived in Egypt in 48 BC, and sided with Cleopatra, who became his mistress.

Cleopatra’s brother refused to accept the Roman dictator’s decision, however, and sought to contest the issue militarily. It did not work out well for him, and in the Battle of the Nile in December of 48 BC, Ptolemy XIII’s army was routed by Caesar. Cleopatra’s brother/ husband drowned in the aftermath, either accidentally or at the hands of his sister’s agents. Cleopatra then married another brother, Ptolemy XIV, while continuing her affair with Caesar. She bore the Roman dictator a son, Caesarion, the future Ptolemy XV – the dynasty’s last nominal ruler.

6. Fredegonde Tossed Out Her Baby To Avoid Catching an Illness From Him

Any list of history’s meanest parents has to include Fredegonde (circa 545 – 597), as cartoonishly evil a mother as they come. She began her career as a servant of Audovera, the wife of Frankish king Chilperic I of Soissons, and eventually seduced the king. She convinced Chilperic to divorce Audovera and dump her into a convent, then became the royal mistress. At some point, Chilperic tired of Fredegonde and set her aside to marry a noblewoman, Galswintha. Fredegonde took care of that by personally strangling Galswintha to death.

Chilperic got the message, and Fredegonde resumed her place at his side as his official mistress and queen consort. In 580, the kingdom was swept by a dysentery epidemic, which struck king Chilperic and two of his sons with Fredegonde. She took that as a sign of divine displeasure for her sins, and for a while, she made some efforts to mend her ways. That did not last long, and she soon went back to being cartoonishly evil. While besieged in a city, another of her sons, this one an infant, came down with a serious illness. Fredegonde was not exactly the doting mother type: worried that she might catch whatever her baby had, she ordered the baby cast away, and let him die.

While Fredegonde’s casting out of her baby to die could not be justified, it could at least be understood as being driven by an animal instinct for survival and the desire, ignoble as it might be, to save herself. Not so what she did to her own daughter, Rigunth. A chip off the old block, Rigunth was just as scheming as her mother, but not nearly as wily and ruthless. As she grew into a beautiful young woman, Rigunth took to bragging that she would soon take her mother’s place as the king’s mistress and queen consort. She should have recalled what her mother had done to other rivals, before running off the mouth like that. A jealous Fredegonde responded by trying to crush her daughter’s head.

As described by a medieval chronicler: “Fredegonde was jealous of her own daughter, Rigunth, who continually declared that she should be mistress in her place. she waited her opportunity and under the pretense of magnanimity took her to the treasure-room and showed her the King’s jewels in a large chest. Feigning fatigue, she exclaimed “I am weary; put thou in thy hand, and take out what thou mayest find.” The mother thereupon forced down the lid on her neck and would have killed her had not the servants finally rushed to her aid“.

4. Ivan the Terrible Killed His Son With His Own Hands

Ivan IV, better known as Ivan the Terrible (1530 – 1584), was the Grand Prince of Moscow from 1533 to 1547, after which he declared himself “Tsar of all the Russias”, which became the title of Russian monarchs from then on. He created a centralized government and was a grand conqueror who finally overthrew the last remnants of Mongol subjugation beneath which Russia had groaned for centuries. He also subjugated the neighboring nomadic Khanates, and greatly expanding Russia’s borders. On the other hand, Ivan was an insanely cruel despot who subjected his people to a decades-long reign of terror.

Ivan the Terrible’s own family were not spared his fits of uncontrollable rage. In 1581, he saw his pregnant daughter-in-law, the wife of his son and heir, the Tsarevich Ivan Ivanovich (1554 – 1581), wearing light summer clothes that the conservative and prudish Tsar thought were too revealing. So he violently assaulted her, viciously enough to cause her to miscarry. When Ivan Ivanovich angrily berated him for attacking his wife, his psycho father smashed his head in with his scepter, causing a fatal wound from which he died a few days later. Ivan the Terrible followed him 3 years later, dying from a stroke while playing chess.

3. Sisygambus Loathed and Despised Her Son

In 334 BC, Alexander the Great kicked off his conquest of the Persian Empire by defeating the Persian governor of Asia Minor at the Battle of the Granicus River. That got the attention of Persia’s king Darius III, so he set out at the head of a huge army to settle Alexander’s hash in person. They met at the Battle of Isus in 333 BC, another Persian defeat, that ended with Darius fleeing the field. He left behind not only his defeated men, as well as his baggage and supplies, but also his family and harem.

Persian kings traditionally took their womenfolk with them on campaign, so when Darius ran away at Isus, he left behind his wife, two daughters, and his mother, Sisygambus. Alexander treated them with respect, but Darius’ flight left Sisygambis seething with contempt for her son, who ran away and left her behind. The Persian king was beaten by Alexander once more at the Battle of Gaugamela, which also ended with Darius fleeing the field. When Darius was eventually killed, Alexander sent his body to Sisygambis, to mourn for and bury him. Instead, she coldly said: “I have but one son [meaning Alexander] and he is king of all Persia“. By contrast, when Alexander died a decade later, Sisygambis went into paroxysms of mourning, refusing to leave her room or eat, and died of grief a few days later.

2. Ptolemy X Was Favored by His Mother Over His Brother – So He Murdered Her

Queen Cleopatra III of Egypt made no bones about the fact that she had a favorite son, Alexander. However, when her husband died, it was Cleopatra’s less favored son who ended up succeeding him on the throne as Ptolemy IX. Thing was, Cleopatra really wanted Alexander to rule instead of his brother. So in 107 BC, she falsely accused the unfortunate Ptolemy IX of having tried to murder her, and engineered a coup that overthrew and deposed him. His place was taken by her favorite, Alexander, who mounted the throne as Ptolemy X.

Having placed her favorite son on the throne, Cleopatra set out to enjoy her twilight years, ruling as co-regent with Ptolemy X. Unfortunately for her, that enjoyment did not last long as she might have hoped, because the favorite son whom she had made king demonstrated his ingratitude in the most visceral way possible. In 101 BC, six years into their joint rule, Ptolemy X tired of his mother, and had her murdered. A popular uprising overthrew him in 88 BC, and forced him to flee to Syria. He returned with a mercenary army, which he paid by looting and melting down the golden sarcophagus of Alexander the Great. That infuriated the Alexandrians, who deposed and chased him out of Egypt again. He was killed during his flight, and was succeeded by his brother, the previous king Ptolemy IX, who had been deposed by their mother, the murdered Cleopatra III.

Byzantine emperor Constantine VI (771 – died before 805) ascended the throne as a child, following the death of his father Leo IV in 780. Since Constantine was only nine years when he was crowned, his mother, the empress Irene, ruled in his place as regent. At the time, the empire was roiled by nasty conflict known as Iconoclasm, between those who viewed the veneration of religious icons as idolatry (Iconoclasts), and those who were OK with icons (Iconodules). In the preceding decades, Iconoclasts had held the upper hand, and, icons were banned throughout the Empire. Irene was an Iconodule, however, and after consolidating her power, she set about undoing the preceding decades of Iconoclasm with all the tenacity and enthusiasm of a religious zealot. In her determination to let nothing stand in the way of her religious mission, Irene rode roughshod over the Iconclasts – including her own son.

Irene began by calling a called a church council in 786, and packed it with opponents of Iconoclasm. Unsurprisingly, they council concluded that Iconoclasm had been a huge mistake. That kicked off a Byzantine counter reformation against the Iconoclasts, who resisted the return of religious imagery just as vehemently as their opponents had resisted the destruction of icons. When Constantine VI finally came of age, he declared himself an Iconoclast. Irene demonstrated the strength of her faith by overthrowing him, and in 797, she staged a coup that deposed Constantine, and put her on the throne in his place. She then ordered her son’s mutilation by gouging out his eyes. Constantine was maimed so severely, that he died of his wounds soon thereafter. Irene then proclaimed herself empress, and continued her quest to undo Iconoclasm and reintroduce religious imagery.

Badass of the Week – Fredegund

Castor, Helen – She Wolves: The Women Who Ruled England Before Elizabeth (2011)

Crown Chronicles – History’s Strangest Deaths: The Duke of Clarence Drowned in a Barrel of Wine

Daily Sabah, August 6th, 2015 – The History of Fratricide in the Ottoman Empire

Gonick, Larry – The Cartoon History of the Universe: From The Big Bang to Alexander the Great (1990)

JSTOR – The Fall of Julia the Younger