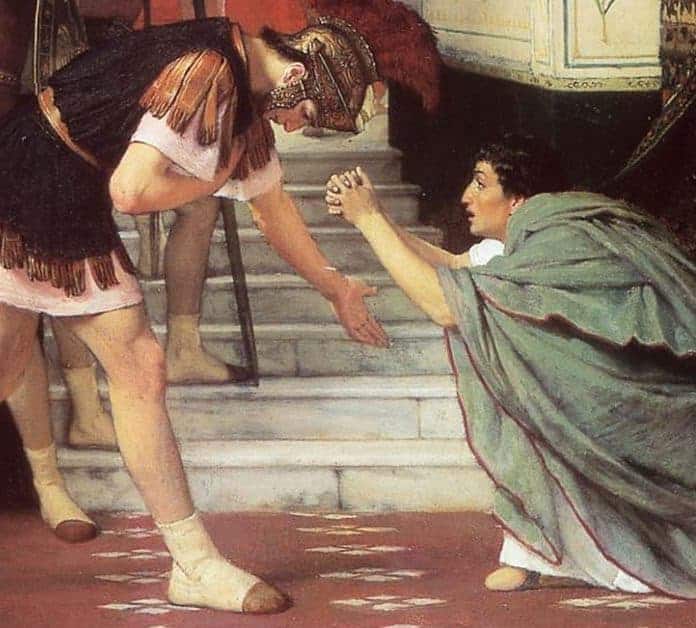 “Who controls the past controls the future: who controls the present controls the past”. So reads the slogan George Orwell gave his Party in what most consider his magnum opus, “1984”. When it comes to history’s malleability, Orwell didn’t have to go far back for inspiration. He drew on the regime of Josef Stalin, which had little compunction in writing people out of the Bolshevik narrative after their fall from grace. But erasure as a posthumous form of punishment was not a product of the 20th century. The damnatio memoriae (or collective “forgetting”) of figures stretches back as far as human history, with the burning of books, destruction of images and retelling (or rewriting) of histories.

This article looks at the practice as it applies to Roman culture. Their attack on the memory of someone who disgraced their community is known as damnatio memoriae or “the damnation of memory”. It’s not a term the Romans used themselves. The decree passed in the Senate desecrating someone’s name and image was called abolitio nominis (the abolition of one’s name). But the term damnatio memoriae is useful for us as it effectively covers all the practices it entailed—banning people from grieving for the deceased, removing images or portraits of the dead, destroying anything they might have produced, and eradicating any physical legacy they might have left. Let’s look at how they applied this condemnatory practice during the late Republic and early Empire to various political figures who fell from grace.

Roman history has no shortage of famous brothers. Most famous are the city’s legendary founders, Romulus and Remus. You might imagine their feral upbringing at the teat of a she-wolf did something to bring them together. But a sibling squabble over a wall and the delimitation of their respective cities’ borders brought their partnership to an untimely end in an act of fratricide. There is, however, a lesser known (but far more cooperative) pair of brothers who can be more firmly rooted in history than legend: Tiberius and Gaius Gracchus.

The Gracchus brothers—or Gracchi as they’re commonly and collectively known—were particularly progressive politicians. Active during the second century BC, they represented the interests of Rome’s poorer citizens as Tribunes of the Plebs. Amongst other things their plans focussed on redistributing land more evenly among Roman labourers rather than allowing the rich to monopolise it all for themselves, revising military conscription laws, and providing a state-offered grain ration. The Gracchi’s manifestos won them the love of the masses. But it also earned them the hatred of the powerful.

The Gracchi can be credited with setting in motion a series of civil conflicts which ultimately led to the civil war of Julius Caesar and the rise of the first emperor, Augustus. This wasn’t just because of their reforms and willingness to challenge the status quo. It’s because they were killed for trying to do so, and their deaths set a precedent. For as Tribune of the Plebs, they were supposedly sacrosanct, unable to be touched or killed. But for Tiberius Gracchus (and Gaius 10 years later) their enemies conveniently ignored this rule.

Tiberius was killed in 133 BC during a scuffle in the forum. He was beaten to death by a mob armed with wooden clubs who’d had enough of his repeated abuse of the veto. Gaius took up his brother’s cause 10 years later, but his radicalism continued to alienate the elite. Having been declared an enemy of the state (hostis) in 121 BC, he fled atop Rome’s Aventine Hill where, realising the hopelessness of his situation, he ordered his personal slave to run him through with his sword. But on both occasions the senators weren’t happy to stop with their deaths; they also determined to erase every trace of the Gracchi’s existence.

After their deaths, their bodies were thrown into the River Tiber while thousands of their allies were hunted down and killed in gruesome ways, some sewn into sacks full of snakes. Both of their houses were confiscated by the state and destroyed and their widows were forbidden from mourning them. But rather than forgotten, to the great frustration of the Senate the Gracchi became hagiologised. Shrines and statues to their memory sprung up at the sites where they’d died with people from across Italy making pilgrimages to visit them.