The Seedy Plots That Overthrew Mary Queen of Scots 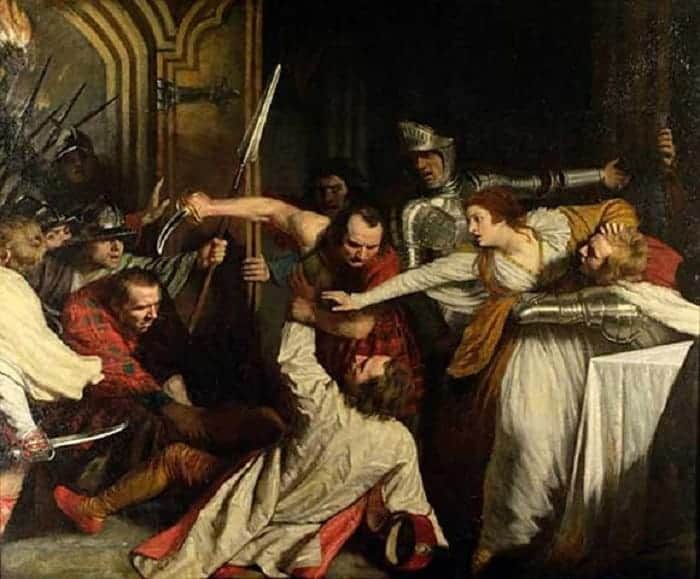 The Seedy Plots That Overthrew Mary Queen of Scots

Few monarchs have had a life as tragic as did Mary Stuart, Queen of Scots (1542 – 1587). Her father, James V of Scotland, died when she was six days old, and she was crowned as queen while still in her swaddling clothes. While Scotland was ruled by regents, Mary was packed off to France, where she was raised in the French royal court. There, she married the French Dauphin, and eventually became queen of France when he succeeded to the throne as Francis II. However, that marriage lasted only a year, because her husband got an ear infection that spread to his brain and killed him.

The widowed Mary returned to Scotland, where she married her cousin, Henry Stuart, Lord Darnley. It turned out to be one of history’s worst royal marriages, as Darnley soon went from Prince Charming to Psycho Hubby. In a series of dramatic twists and turns, Darnley murdered Mary’s secretary in her presence, and she retaliated by hooking up with a lover who blew up her husband with gunpowder. It ended with the shocked Scots dethroning Mary and chasing her of out Scotland.

Mary Stuart in Scotland: A Terrible Environment and a Terrible Marriage

Mary was raised Catholic, but the Scotland to which she returned in 1561 was tearing itself apart between Catholics mounting a desperate rearguard action, and and increasingly assertive Protestants. Compared to the gaiety of the French court, where Mary had grown up, Scotland was a decidedly dour place. The leading Protestant reformer John Knox denounced the habits she had picked up in France of dancing, dressing too stylishly, and hearing the Catholic mass.

It was against that backdrop that Mary met an Italian nobleman, David Rizzio, who arrived with the staff of an embassy from Savoy to Scotland in 1561. Rizzio, who was considered a good musician and a great singer, stood out and caught the attention of the queen. A cosmopolitan and cultured courtier was a rare find in Scotland, so Mary wasted no time in snatching Rizzio up, and adding him to her staff as a court musician and bass in her personal choir. By 1564, Rizzio had grown rich off the the queen’s patronage, and had been elevated from musician to Mary’s private secretary.

As private secretary, Rizzio controlled access to Mary, which made him a powerful figure in his own right. That did not sit well with the Scots, however, who resented a foreigner – and a Catholic foreigner at that – wielding such clout at court. Rumors soon began making the rounds that Rizzio was abusing his power for his own benefit, and that he had become the queen’s lover. Unfortunately for both Mary and Rizzio, they paid no attention to the rumors, and did little to dispel with. That blase attitude would come back and bite both.

Whatever the truth about an affair between the queen and her private secretary, Mary’s affections were soon captured by another beau. Henry Stuart, Lord Darnley (1545 – 1567) was Mary’s cousin. A handsome and well proportioned young man, Darnley was 19 when he first met Mary in 1565. The queen was captivated by her cousin, and soon fell head over heels in love with him. In addition to the attraction, a marriage made dynastic sense, as it would unite two branches of the Stuart line, and thus strengthen the Scottish royal family.

A marriage was swiftly arranged in 1565, and Darnley ascended the throne of Scotland as king consort. Soon after the wedding, however, Mary discovered that her second husband was a spoiled brat, with an excessive sense of entitlement. Darnley was enraged when Mary refused to grant him the Crown Matrimonial, which would have allowed him to continue ruling after her death. When his wife got pregnant, instead of being pleased, Darnley fretted that an heir would push him that much further from the throne.

From Love, to Hate, to Murder

Henry Stuart, Lord Darnley, became Mary’s second husband, and king consort of Scotland, from 1565 until his demise two years later. Darnley had accomplished little of note in his brief life before his violent death at age 22. His single legacy was to impregnate his wife with the future King James VI of Scotland and James I of England. The Scottish royal couple’s sole offspring succeeded queen Elizabeth I to the English throne, and gave rise rise to the Stuart Dynasty, which first united England and Scotland.

Darnley resented that his wife was queen, while he was a mere consort, with no independent power. He became even more resentful when Mary removed from circulation the currency that had his head on it. Darnley eventually focused his rage on Mary’s private secretary, David Rizzio, whom he accused of turning the queen against him, as well as being her lover. The accusation was rich, considering that Darnley was himself infamous as Scotland’s most debauched and promiscuous nobleman. Indeed, his list of alleged lovers included David Rizzio.

Whatever the truth, if any, of a three way bisexual love triangle between Mary, Darnley, and Rizzio, the royal marriage soured within a year, and by 1566, the queen and her husband were estranged. So Darnley began plotting against Mary, who by then was pregnant. His nebulous plan was to push the queen out of the way, and take her place on the throne as king of Scotland in his own right. Whether or not he had ever been Darnley’s lover, Rizzio stuck with Mary when the rift opened up between the queen and her husband.

Darnley conspired with a cabal of aristocrats, including his father and other nobles, to effectively carry out a Protestant coup against Mary, with David Rizzio playing the role of scapegoat. Accordingly, on the evening of March 9th, 1566, Darnley at the head of a group of 80 armed men, forcibly seized Mary’s palace in Edinburgh, then burst into the queen’s dining room, where she was supping with her confidants, including her private secretary. There, Mary was publicly accused of dishonoring her husband by cheating on him with her secretary. In the ensuing fracas, which entailed the queen being held with a pistol pointed at her head while her secretary attempted to hide behind her, Darnley and his henchmen proceeded to stab David Rizzio to death.

All in all, David Rizzio was stabbed 56 times, then his corpse was unceremoniously flung down the palace’s main stairs, and stripped of its jewels and fine clothes. In the meantime, Mary was held at gunpoint by her husband’s henchmen, one of whom pointed a pistol at her pregnant belly, while another threatened to stab her. By murdering the queen’s secretary in her presence, Darnley had not only sought to intimidate and bend his wife to his will, but also to shock the pregnant Mary into miscarrying.

Mary did not miscarry, and gave birth to the future king James in June of 1566. However, between seeing her psycho husband commit bloody murder in her presence, while his sidekicks threatened to visit deadly violence upon her and upon the baby in her womb, the queen was, understandably quite intimidated. After the deed was done and it was all over, Mary was forced to pardon Rizzio’s murderers. However, Darnley would not get away with it for long.

The queen’s husband soon fell out with his Protestant co-conspirators, and just two days after murdering David Rizzio, Darnley switched back to his wife’s Catholic faction. On the night of March 11-12, 1566, he helped Mary escape from her palace, now teeming with Protestants. However, Darnley’s change of heart was too late to save the marriage, which was irrevocably ruined by the murder of Rizzio.

Mary neither forgot what had happened, nor forgave her husband. After giving birth in June of 1566, Mary bided her time, until November of that year, when she met with her loyal nobles to figure out what to do about the “problem of Darnley”. They decided that the queen’s husband had to go. As described by contemporaries: “It was thought expedient and most profitable for the common wealth … that such a young fool and proud tyrant should not reign or bear rule over them; … that he should be put off by one way or another; and whosoever should take the deed in hand or do it, they should defend“.

Mary’s leading ally in the ensuing plot to get rid of Darnley was James Hepburn, 4th Earl of Bothwell, who organized a plot to assassinate Darnley. On February 19th, 1567, explosives were detonated beneath Darnley’s bedroom. He survived the blast, but upon staggering out of the wreckage, he was seized and strangled to death. Three months later, Mary married Bothwell. The marriage turned out to be extremely unpopular, and united both Catholics and Protestants in denouncing the queen for marrying the man who had murdered her husband.

Mary and Bothwell raised an army against their opponents, but before any battle could be fought, the royal couple’s forces evaporated, as their men deserted them. Bothwell was allowed to leave, provided he left Mary behind. He jumped at the chance, and abandoned his wife to the tender mercies of her enemies. She was taken captive to Edinburgh, where she was denounced as an adulteress and murderess, and imprisoned. On July 24th, Mary Stuart, Queen of Scots, was forced to abdicate in favor of her one year old son, James. She fled to England, where she got involved in further political intrigues, that ended with her beheading two decades later.