Today in History: England's War of the Roses Begins (1455) 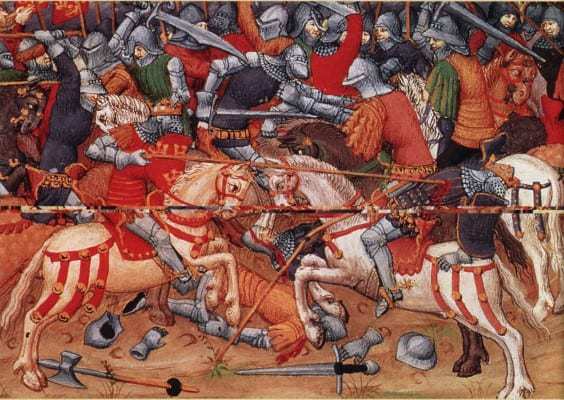 Today in History: England’s War of the Roses Begins (1455)

The battle to control the English throne is almost as old as the throne itself. Even though it isn’t something we think about, there has been conflict in regards to the heir to the British throne as recently as 1936. However, because of the current reining monarch’s (Elizabeth II) longevity, the conflicts have faded into history somewhat (especially outside of Britain).

Henry VI had very little chance of being an effective monarch. He was surrounded by power-hungry men who wanted to control the throne through him for their own gain. He was only a year old when he was put on the throne after his father’s death in 1421.

By the time he turned 25, his House was in chaos because of the people who had helped him rule England while he grew up. This allowed the House of York to successfully start what would become the War of the Roses on May 22, 1455. The Lancasters were represented by the red rose, and the House of York who were associated with the white rose, hence the name of conflict: War of the Roses.

The War of the Roses took place officially between 1455 and 1487. Fighting had been going on long before that, as both Lancaster and York fought for the throne. It would also continue after the official end to the war.

The House of York would meet with initial success, and would place Edward IV on the throne on March 4, 1461. He would rule for around 10 years before being deposed by Henry VI and the Earl of Warwick in 1470, and then would be back on the throne for another 12 years before he died in 1483.

The war ended at the battle of Bosworth Field, when Henry Tudor beat the House of York and restored the House of Lancaster to the English throne. This would be the start of the Tudor Dynasty, which lasted until 1603 when Elizabeth I died without an heir. The Tudor Dynasty, of course, produced Britain’s most famous king, King Henry VIII, he of the many wives.

The War of the Roses is much more complicated than what we’ve been able to talk about in the space we have here. However it is important, as it is the war the led to the English Monarchy as it is today. And while it was by no means the last of the conflicts over the English throne, it is one of the most famous.