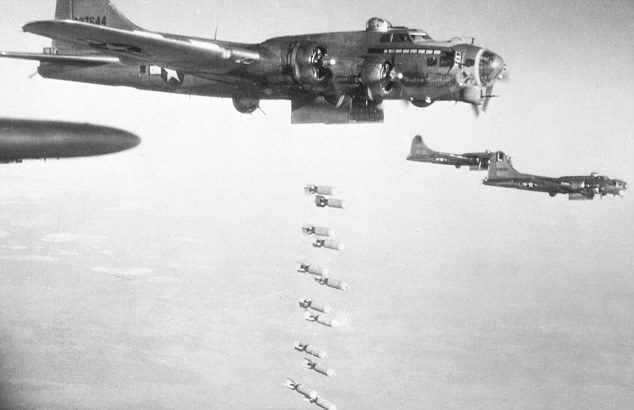 Enemy bombers and ground attack aircraft overhead were among the most unwelcome sights for soldiers and civilians alike during WWII. From the demoralizing banshee wails of diving Stukas in the early days of the blitzkrieg, to the heavy roar of thousands of engines above mingling with the ground shaking explosions of falling bombs during day and nighttime raids, few things during the war caused as much widespread terror and devastation as airplanes attacking ground targets. However, while terrifying to those below, bombing and ground attack were among the most hazardous occupations of WWII.

During a raid on Schweinfurt in 1943, out of 209 American bombers that crossed the coast into Europe, 39 were shot down, and 118 were severely damaged. In a raid on the Ploesti oilfields that same year, out of 162 US bombers that reached the target, 53 were shot down, 660 crewmen were lost, and of the surviving 109 bombers that made it back to Allied bases, 58 were damaged beyond repair. The RAF’s Bomber Command suffered a 59 percent casualty rate during the war: out of 125,000 aircrews who went on raids, 55,573 were killed, 8403 were wounded, and 9838 were captured. During the first month of combat following the Nazi invasion in 1941, Soviet Sturmovik ground attack squadrons suffered losses of 84 percent as they desperately sought to slow down the rampaging Germans.

Following are 12 notable bombers and ground attack airplanes of WWII.

The most distinctive airplane of the early war, the Stuka dive bomber, with its inverted gull wings and nerve-wracking shriek as it dove on targets, became the emblematic symbol of the blitzkrieg and terrified soldiers and civilians alike, from the Russian Steppe to the Atlantic, and from the Arctic Circle to the Sahara. The Battle of Britain exposed its vulnerability when operating beyond an umbrella of German aerial superiority, but in the right conditions, Stukas continued to wreak havoc and terrorize those on the ground until war’s end.

The Stuka was designed in secrecy in 1933, back when Germany still pretended to comply with the Treaty of Versailles and its prohibition of a German air force. A  prototype was built in Sweden, smuggled into Germany in 1934, and test flown in 1935. The inverted wings improved the pilot’s ground visibility, and allowed a shorter and sturdier undercarriage while retaining sufficient ground clearance for the propeller.

Ju 87A Stukas were tested during the Spanish Civil War, with mixed results that steadily improved as designers worked out the kinks and personnel gained operational experience. The Ju 87B version with which Germany entered WWII was typically armed with a 500 kilogram bomb, and had wind-driven sirens known as “Jericho Trumpets” that emitted an intimidating and demoralizing wail when the plane dove – an effect enhanced by cardboard sirens on the bombs. Bombload was increased to 1800 kg in the upgraded Ju 87D, which entered service in 1941. The Ju 87G, which became operational in 1943, carried two armor-piercing 37mm cannons in lieu of bombs, and proved especially lethal against tanks, whose thinner top armor was vulnerable to attacks from above.

The Stuka’s greatest asset was its pinpoint accuracy by WWII standards. In the hands of an experienced pilot, it could destroy a zigzagging target – Germany’s most decorated serviceman of the war, Hans-Ulrich Rudel, is credited with destroying 519 tanks, over 800 vehicles, 150 artillery positions, damaging a battleship, sinking a cruiser, a destroyer, 70 other seacraft, and downing 9 airplanes, mostly while flying a Stuka.