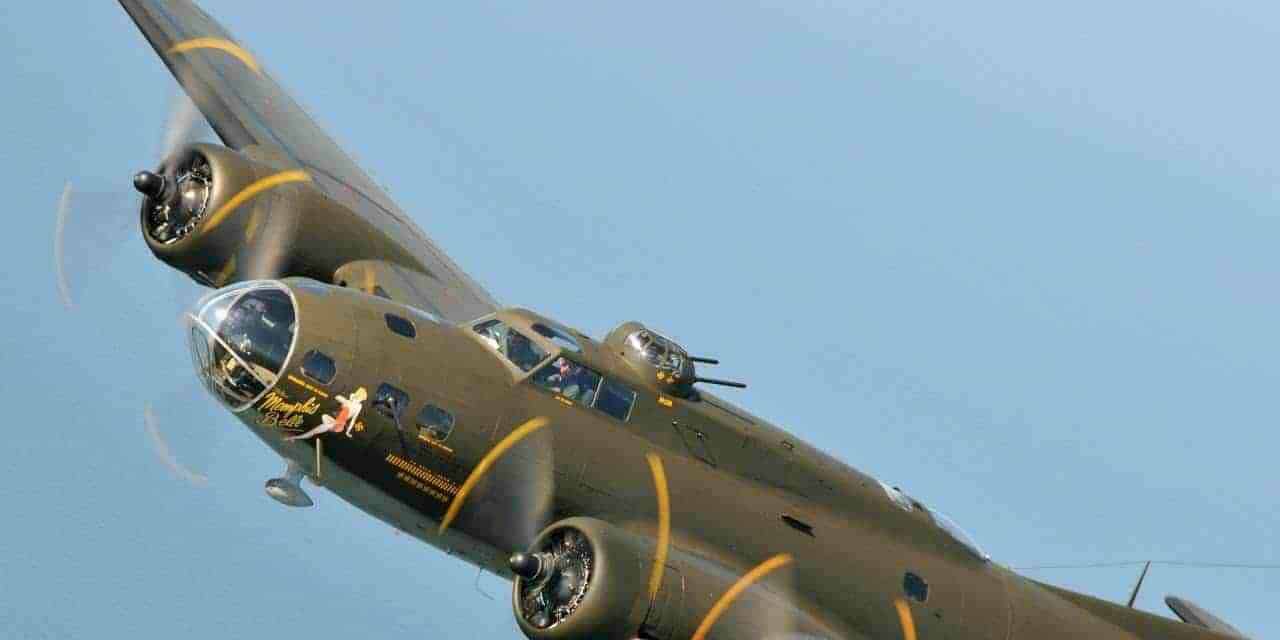 The idea of having a maneuverable, flying body had been around for centuries, that was put into a well-versed design during the Renaissance by Leo da Vinci. However, the technology of the time didn’t support his ideas so it wasn’t until half a century later that airplanes came into existence. Its in man’s blood to fight and the only way to win a fight is by outsmarting the enemy at every turn. With the invention of the airplane, many powerful armies around the world started adding airplanes to their arsenal which later split into several types including fighters, interceptors, bombers and so on.

The world saw the first bomber in action during the Italo-Turkish War of 1911 when Turkish bombers were put in action. Within a few years, World War I kicked off and with haste, the competing countries put their air forces into action. Bombing raids became a norm during World War I and ever since then, each leading power tried to evolve its airforce in the best possible manner.

The Allies however were on the more successful side of the spectrum with their “strategic bombing” raids, which were carried out to hit German targets at a very accuracy. In fact, bombing was one of the main reasons as to why the Germans were beaten during WWI.

During the time between World War 1 and World War 2, it became imperative to the major powers to develop strong bomber fleets to counter each other’s influence in future conflicts. Thus, the arms race began and by 1940, both the Allies and the Central Powers, especially Germany had developed outstanding bombers, with many designs in production that would later be used by the winning side.

So which bombers really stood out and made a name for themselves?

During the first half of the 20th Century, the US didn’t have a dedicated Airforce arm, instead the air force was part of the US Army Air Forces. The B-17 was arguable the most successful bomber during WWII. It was developed by Boeing for the US Army Air Forces during the 1930s when a need for modern bombers was felt by the leadership. It was the first quad-engine long range bomber the world had seen and was so effective that it was developed throughout the war.

There was an initial contract for 200 bombers, however this changed as soon as its strength in strategic bombing was found. The bomber wasn’t made just for dropping bombs but was designed in a manner that it would be able to protect itself from enemy aircrafts. It had 8 gun positions along with 14 heavy machine guns, operated by a crew of 10 people. It could carry 5 tons of bombs deep inside enemy territory and cruise at 406 km/h.

After the war, the Flying Fortress was used by many countries who managed to capture it, as inspiration for their own bombers.

The Lancaster was the most popular night-time bomber used by the Royal Air Force for its air raids. The 4-engine bomber was introduced in March 1942 and since then was a favorite within the British High Command. It had a loading capacity of 10 tons and could house special type of bombs including the infamous dam buster bombs that broke down the Nazi energy backbone.

Lancasters weren’t that fast when it came to their cruising speed, which was limited at 322 km/h, however the ceiling of 21,400 feet and 3.7m/s speed did gave them a very great advantage. Also, they were very agile and could withstand a lot of German anti-aircraft fire.

A total of 150,000 flying missions were carried out by the Lancaster bomber, almost half of which ended up in casualties.

This was the largest bomber to enter the war. It was mostly used in the Pacific region but soon developed a reputation all over the world for dropping the atomic bombs at Hiroshima and Nagasaki.

A total of 3,970 Super Fortresses were built and operated by the US Army Air Forces, US Air Force and Royal Air Force.

The bomber decimated through Japanese cities and reduced them to rubble thanks to nighttime accuracy. It was operated by a crew of 10 and could cruise at 575 km/h. In addition, it could fly for 5230 km on a full tank. Later on, the bomber was used in the Korean War until it was retired in 1960.

The Handley Page Halifax was a heavy bomber introduced in 1940 by the RAF. In addition to the RAF, the quad-engined bomber was used by the Canadian, Australian and French Air Forces at the time. A total of 6,176 bombers were produced.

At the time of introduction, the Halifax wasn’t appreciated by the head of Bomber Command, compared to Avro Lancaster, which was a British masterpiece. But their production efficiency forced the High Command to rethink their decision and the Halifax was produced throughout the war.

It carried out bombing raids in North Africa and Italy, dropping a total of 224,207 tons of bombs. Almost 2000 Halifaxes were lost, but the bomber lived over its expectations and was frequently converted into an electronic warfare and special operations aircraft in occupied Europe.

The infamous Stuka bomber has made its way into all WWII video games and movies. And its safe to say that the fame these bombers have earned is all well deserved. The Junkers Ju 87 was a modern (at the time) dive bomber and a truly lethal weapon with amazing accuracy. They were mainly used as airborne artillery because of their maneuverability and thus provided support to German Armor columns.

The Ju-87 wasn’t a high altitude bomber and carried out raids at low elevation. This was seen as a drawback by the Allies, but in fact this was the very feature that established its superiority. Initially the bomber could only deliver a payload of 700 kg but after a couple of upgrades it could carry 1800 kg worth of munitions, attaining a max speed of 600 km/h.

The bomber’s main source of accuracy was its dive bombing tactic, which made it as accurate as the F-117 stealth aircraft. As if this wasn’t enough, Hitler even ordered frightening measures like loud sirens and machine guns to the design making it one of the most feared bombers during the war.

The bomber saw action on both fronts, Eastern and Western.

The Petlyakov PE-2 was a Soviet twin-engined light bomber that was built in great numbers during WWII due to its success. It is considered by many histories to be the best ground attack aircraft as well as a recon plane. It paralleled the German Junkers Ju-8 and the British Wellington and was fourth in number of productions, i.e. 11,427.

The bomber had a service ceiling of 8.800 meter and a max speed of 580 km/h. They could climb at a rate of 7.2 m/s making them highly effective in close encounters. In addition to delivering over 8 tons of bombs, they were fixed with machine guns which came in very handy as these planes were used as both bombers and fighters in changing situations.

The TB-3 was a heavy bomber operated by the Soviet Air Force throughout the Second World War. Even though the bomber was introduced almost a decade ago, the numbers came in quite handy when the war broke out until other bombers could take its place.

It was the world’s first cantilever wing quad-engined bomber that had a ceiling of 4800 meters and could deliver almost 18 tons of munitions. A shortage of escort fighters meant the bomber was usually on its own, deep behind enemy lines, but still it was able to perform very well. In fact, its performance was so great that almost 900 of these bombers were built throughout the war.

By August, 1941 they were operated by elite Soviet crews and flown 3 times per night. They participated in all major battles through 1943 including Stalingrad, Moscow and Leningrad, making this one of the most decorated bombers in Soviet aviation history.

The He 177 was a heavy bomber used by the Luftwaffe during the Second World War. It was introduced late into the war in 1942, but built in great numbers once its effectiveness was realized. Almost 1,700 He-177s were built by the Germans throughout the war.

The bomber was designed mainly for long-range missions giving it a whopping payload capacity of 32 tons at a rage of 5,600 km. Therefore, this was a bomber similar to the ones used by the US to penetrate deep inside German lines. It could operate at 565 km/h at 6 km elevation and made into several variants to serve according to the requirements.

It was a commonly held myth during the war that a special prototype had been developed based on the He-177 called the V38 to deliver a droppable atomic bomb. However, this never materialized as the Germans never succeeded in their nuclear program.

The bomber was mostly used on the Eastern front against hidden Soviet war industry in the Urals.

The introduction of the Ar-234 brought the world into the modern age of aviation. The Ar-234 was the world’s first jet powered bomber but its late entry into the war gave Germans little time. Only 214 such bombers were built as it was introduced in 1944.

The bomber was impossible to intercept as it could cruise at 700 km/h and attain a top speed of 742 km/h while climbing to 10,000 meters at a rate of 13 m/s. Its use as a bomber was mostly kept on a back burner and during the time it was active, it was extensively used for recon.

Later on, the bomber’s designs were used by the Allies to make their own jet aircrafts.

Japan was a very advanced country compared to other Asian countries at the time. Its war machinery was as impressive as the Germans and Allies, so it would be a mistake to leave it out of the list. The G4M was a long range bomber used by the Japanese Imperial Navy during WWII to damage land based assets of the Allies. Its innovative design and superior engines gave the US fighters a tough time.

Almost 2400 G4Ms were built throughout the war. They were operated by crews of 7 and could attain a top speed of 418 km/h at a range of 3000 meters. As the war progressed, several variants were developed to fit the requirements of electronic warfare. After the war, the captured aircrafts were operated by the US Air force for evaluation.