Mercy in War: The Story of a German Pilot and a Crippled B-17 During WWII 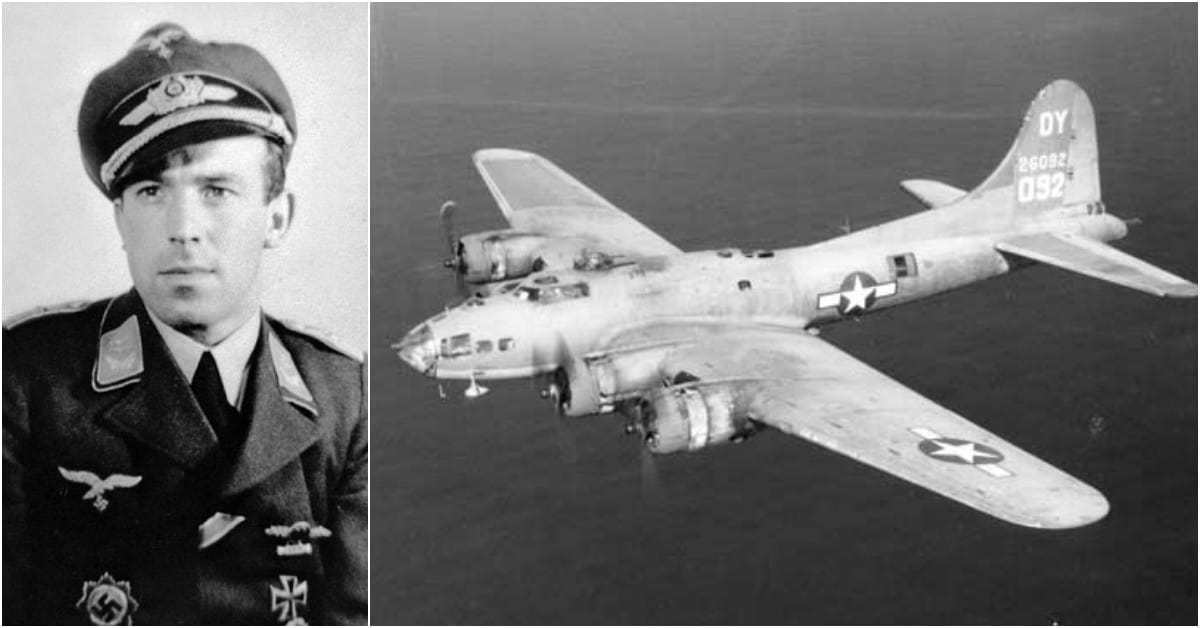 Mercy in War: The Story of a German Pilot and a Crippled B-17 During WWII

Cold hard logic doesn’t always translate to war, sometimes true evil reigns, such as the capture of Nanjing, but many other times moments of mercy and compassion show, such as the Christmas truce of WWI. Western Europe (outside of Germany) and the U.S. tend to have the simplistic view of the Allied forces being good and the Germans being bad or evil in some cases.

While there were cases of German forces committing war crimes, the German pilots of the Luftwaffe mostly just did their jobs. On December 20th, 1943, however, German pilot Franz Stigler did not do his job and became a hero because of it.

When looking back in history, we must always remember to keep the morality of the period in context. Indiscriminate city bombing would be considered a war crime today, but that was not the case during WWII. Virtually every side that could bomb enemy cities did. We know that it was wrong now, but the bomber pilots then simply did their jobs.

The Luftwaffe’s job after D-day transitioned from bombing and the Battle of Britain to defending the Fatherland. This meant defending against the mighty B-17 bombers and their escorts. It is important to note that essentially any bomber if caught alone, was an easy target for a fighter. That said, the B-17 had the nickname of the “Flying Porcupine” for a reason. The bombers had as many as thirteen machine guns, depending on the specific variant, to ward off fighters, especially in the time before long-range escort fighters became the norm. A vulnerable B-17 was absolutely a priority for any German fighter pilot.

One German pilot, Franz Stigler, was very good at his job. He was nearly eligible for the highest military award in the German military, the Knight Cross. 30 air victories were the requirement, with fighters as one and downing bombers counting as three victories, further showing the priority placed on destroying the bombers. Franz was sitting at 27 victories on the day of the incident.

Across the English Channel, Charlie Brown, a self-described “farm boy from West Virginia,” was gearing up to pilot his B-17F, the “Ye Olde Pub” as part of a bombing group targeting aircraft manufacturing centers in Bremen. Before the 10-man crew could even drop the bombs, flak from hundreds of AA guns peppered Brown and his position as the lead bomber.

A damaged engine forced Brown to hang back from the formation and presented an even more ideal target, especially for fighters as there were no other B-17s to present the danger of overlapping fields of fire. About 10-15 German fighters converged on Ye Olde Pub and tore through it with autocannon fire.

Though they were all on their own, the crew fought back with fury, their machine guns taking down as many as three of the fighters. They did pay the price, however. The tail gunner, wedged into the narrow and exposed tail, was shot through the head and neck and died in the air. Another crew member took a ricocheting shell to the eye. Brown, the pilot was hit in the shoulder.

On top of these injuries, the bomber was in serious trouble. Essentially all the services were offline, from electrical to wing flaps. The crew was now more vulnerable to the freezing and low-oxygen air at the high altitude. One of the ball-turret gunners suffered frostbite after shrapnel blew holes in the framework and exposing him to a fierce rush of freezing air. In the little time, the rest of the crew had to perform first aid, they were again met with horrible luck when they saw that the morphine had frozen solid.

Unable to take anymore with the combination of blood loss and low oxygen, Charlie Brown passed out as the bomber with its damaged engines and flaps spiraled out of control. The German’s left, assuming the bomber was destined to crash into the forests below. Except it didn’t; Brown came to and saw an endless field of trees, a sure sign that he needed to pull up. Leveling out, the exhausted crew slowly gained altitude and headed back to Britain.

It was at this moment that Franz Stigler spotted the bomber. Stigler was waiting to rearm and refuel on a nearby airfield. Locked and loaded, he set out to get the kill that would give him the coveted Knight’s Cross. As Stigler came upon the Bomber in a perfect approach towards the tail, he saw the devastation that had been brought upon the crippled plane.

The Ye Olde Pub had lost the rudder and elevator from the tail, had one engine failed and the others struggling to plug along. Bullet holes were everywhere and concentrations of shots had torn away huge swaths of the B-17, revealing a few of the crew. Stigler first noticed the deceased tail gunner and would see more wounded men as he pulled forward to see the shattered nose cone and the bloody and slumping Charlie Brown.

Mercy in the Midst of War

Stigler had been prepared to fire the entire time, but never squeezed the trigger. He remembered one of his officers telling his pilots never to shoot a man in a parachute or he would shoot them when they landed. Such morality was present in the Western front as similar cultures bred a level of empathy. Shooting parachuting pilots did happen, but was rare; of course, such civility was almost entirely absent in the East as millions of Russian and German P.O.W.s were executed without cause.

Stigler viewed the crippled bomber in the same light as parachuting men. They and their equipment were broken and defeated. Not only was it not a fair fight, they weren’t even trying to shoot him (many of their guns had actually stopped working). So, Stigler tried to communicate with Brown that he needed to change course and head to Sweden where he would be held but also given medical care.

Brown admitted to never really understanding Stigler’s intentions, he saw the gestures through the windshields but was so weak that he only had one thought in his mind and that was to return to his base. It didn’t take Stigler long to figure this out, but he still had some interest in this aircraft and its stubborn pilot.

Instead of shooting them down, or even just leaving, Stigler decided to continue flying close to the bomber. A German aircraft so close to a bomber ensured that no AA gun would fire shots at the Americans. In this way, Stigler “escorted” Brown and his crew to the English Channel before breaking off to return to German territory.

Amazingly, only the tail gunner was killed in the fighting, the remaining nine survived, though some with permanently debilitating injuries. Charlie Brown would continue to fly bombers for the remainder of the war. He told his superiors about the German pilot who didn’t shoot and escorted the crew to safety, but the commanders hushed it up. It was important to keep the men’s fighting spirit up, and sharing stories of Luftwaffe compassion wasn’t the way to do that. At the very least, Brown and most of the crew could take a few needed days of rest and celebrate Christmas.

Stigler, on the other hand, knew not to say a single word to anyone ever, as long as the war still raged. Despite the circumstances of pity and mercy that overrode the already difficult task of killing, leaving even a barely functional bomber to return to be repaired and fight again was treasonous. Men had been killed for similar acts before and with the tides of war surging against them, the Germans would likely have executed Stigler as an example to the remaining fighters. Despite his status as a respected ace, Stigler feared for his life but did survive the war.

Years later, Charlie Brown would recount this incident, and almost like he heard it for the first time himself, he was intrigued and set out to find the mysterious Luftwaffe savior. After writing to many veteran organizations Stigler finally picked up on the story and set up a meeting with Brown. The two had a grand time meeting and retelling stories. From 1990 until their deaths in 2008, the men were the closest of friends.

This is but a small mention of a fantastic story. A book about these men’s lives and a superbly in-depth look at the engagement can be found in Adam Makos’ book, A Higher Call. The war history-inspired rock group Sabaton also wrote a song about this engagement titled “No Bullets Fly”. A true gem of a WWII story, the story of compassion and empathy in an otherwise terrible time is too often forgotten.