This Day In History: The British Attack The German Battleship, The Tirpitz (1943) 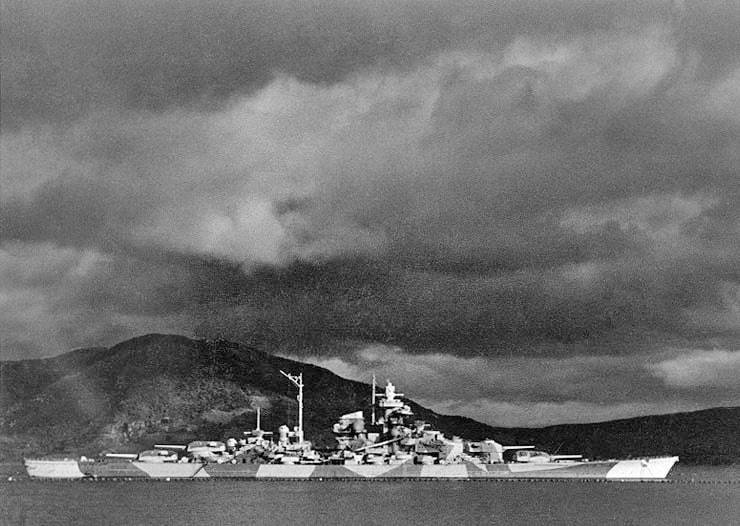 This Day In History: The British Attack The German Battleship, The Tirpitz (1943)

On this day in 1943, six mini British submarines attempt to sink the German battleship, Tirpitz, as it was moored in Norwegian waters. The attack was codenamed Operation Source. The Tirpitz was the largest battleship in the German fleet, after the sinking of the Bismarck in 1939. The Germans had positioned the Tirpitz in Norwegian waters in order to threaten the Allied Convoys that were passing through Arctic waters. These Allied convoys were used to supply the Soviets in their fights against the Germans. These convoys usually travelled from Iceland to U.S..S.R. ports of Murmansk and Archangel. The Tirpitz was a huge ship and its guns could have wreaked havoc on the Arctic Convoys. However, the Nazis were in no hurry to attack the Arctic Convoys as they feared the lose of their biggest ship. This meant that it did not actually threaten any ships heading for the Soviet Union. The Tirpitz was a major concern of the British. They hoped to use the Artic sea as a possible route to sail their ships to the Pacific to fight the Japanese. The Tirpitz denied the Allies total control of the seas in the Arctic sea. Churchill believed that the destruction of the Tirpitz was essential for an Allied Victory.

The British had tried to destroy the vessels by repeated R.A.F. raids in January 1942. These failed to neutralize or even damage the German ship. Another large raid was carried out in March 1942, when dozens of Lancaster Bombers tried to bomb the Tirpitz, but again the ship seemed to have led a charmed life and escaped the raid without any serious damage. After this Hitler had ordered that the Tirpitz be reinforced with a cruiser and destroyers.

The R.A.F. continued their attacks on the German battleship. In one daring attack, they planned to steer a two-man craft up to the ship and plant explosives on the Tirpitz‘s hull. However, this failed because of stormy weather conditions. In 1943, the battleship Scharnhorst joined the Tirpitz, and the Nazis suddenly had a formidable naval presence in Arctic waters. This meant that the Allies had to suspend the Arctic convoys to the Soviet Union. The British knew that they had to act.

Finally, in September, Churchill ordered six ‘midget’ British subs set out to sink the Tirpitz. The min-subs had a two-man crew, they would attach explosives to the hull of the battleship and would be able to approach the battleship, undetected by travelling under the water. good. The midgets had to be towed to Norway by conventional submarines. Only three of the min-subs made it to their destination but they succeeded in approaching thTirpitz. They also were successful in attaching explosives to the keel of the ship. The crews of all three sub are captured soon after, but they had largely achieved their goals. The crewmembers were to spend the rest of the war years as POWs in Germany. The Tirpitz was quite badly damaged by the explosions and it was out of action for several months. This crucially allowed the Arctic convoys to re-start and to once again supply the Soviets. Despite the British fears about the Tirpitz, the ship only saw action only once during the war, when it shelled a British coaling station on the Norwegian island of Spitsbergen.

The RAF eventually sank the Tirpitz in the closing stages of the war.