"Lightning War": The Father of the Nazi Blitzkrieg 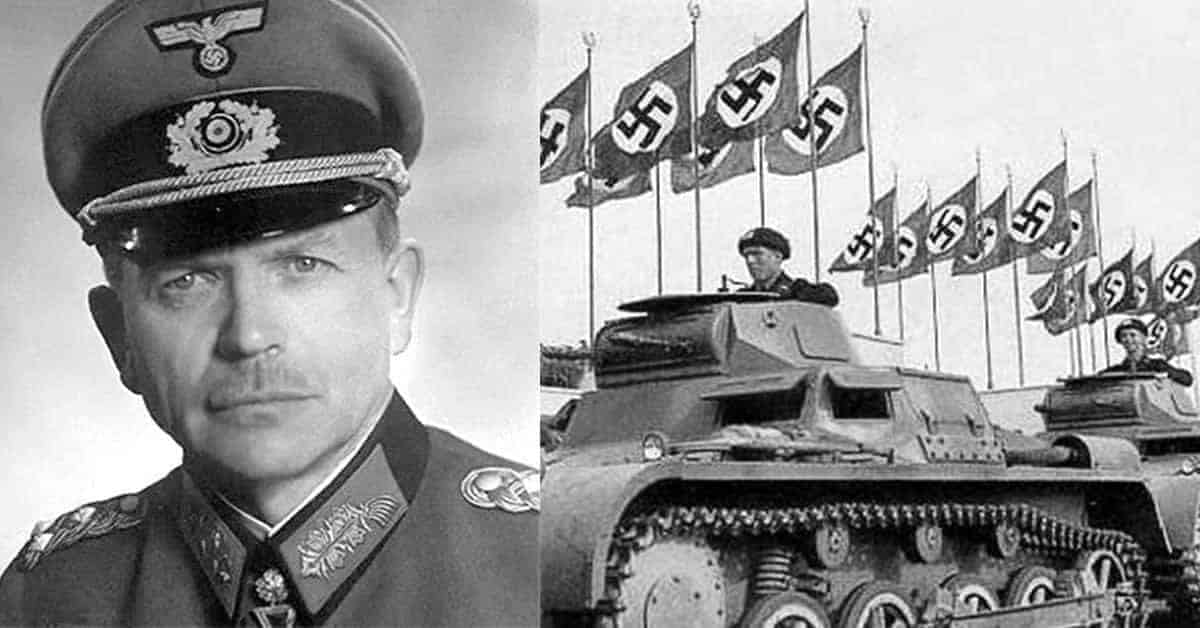 “Lightning War”: The Father of the Nazi Blitzkrieg

Blitzkrieg. The word conjures up terrifying images of the Nazi war machine crushing their European neighbors. Luftwaffe bombers pounded the enemy from the air, the first paratroopers dropped behind enemy lines, and incredibly mobile mechanized forces, commanded by notables such as Erwin Rommel, defeated their opponents through brilliant combinations of speed, surgical strikes, and devastating power.

Throughout the early years of World War II, the blitzkrieg was an astounding success for Germany, and Adolf Hitler loved to credit himself for the Nazi’s rapid victories rather than the innovator of “lightning war.” Hitler, however, had nothing to do with the development of the blitzkrieg, and the doctrine that underpinned blitzkrieg did not magically appear on the Fuhrer’s desk during an intense thunderstorm one night in 1936 (whatever he might have wished).

In short, the word blitzkrieg describes a strategic series of short, decisive battles that overwhelm an enemy state before it mobilizes. This means crushing the enemy through overwhelming combat power with incredibly mobile, and finely coordinated, mechanized units in a surgical campaign that demoralizes and utterly destroys an opponent’s ability and will to fight. Germany’s military combined these principles in maestro-like fashion, and the innovator responsible for developing “lightning war” into a doctrine that militaries still utilize was named Heinz Guderian.

Born in 1888, Heinz Guderian belonged to a military family. His father, Friedrich, was an officer in the vaunted Prussian army, and both Heinz and his brother Fritz followed him into the military. They attended cadet schools together, but Heinz graduated ahead of his younger brother, and earned his commission in the German Jaegers (light infantry) in 1908 after attending the War School in Metz.

Guderian was an intelligent and capable young officer driven by powerful ambitions, and he diligently studied military tactics, theories, and evolving technologies, such as the new radio-signal equipment. His work earned Guderian a coveted place at Berlin’s War Academy, and he developed a tactical reputation for intently studying his enemy before devastating their forces with rapid attacks.

Guderian’s education was interrupted when World War I engulfed Europe. His experience with radio equipment, however, kept Guderian from the battlefield, and he served in the communications division throughout most of the war. The work was arduous and poorly understood by the high command, but Guderian grasped what his superiors did not.

Radio allowed him to develop a coherent tactical picture of a battle, and an able commander could redirect troops to seize fleeting opportunities, or avoid disaster, in a way never thought of before. Guderian’s realization (and fascination with the new tanks) laid the foundation for his future theories, and the reports describing the visceral carnage that poured in from the stalemate at the front convinced the young officer that war was due for a makeover.

Guderian’s work in communications did not go unnoticed, and, after a brief stint in intelligence, he was appointed to the General Staff Corps on February 28, 1918. This was a short-lived post for Guderian, and ended shortly after Germany agreed to an armistice on November 11, 1918. The surrender infuriated Guderian, and, like many other Germans, he felt betrayed by the German government for capitulating to the Allies.

The German Army was limited to four thousand officers per the Versailles treaty, and Guderian was one of the few who retained their commission. Initially, he served on the central staff of the Eastern Frontier Guard Service, who nominally defended Germany’s eastern border, before joining the Freikorps Iron Division as its second staff officer.

Intended to protect Germany from forces engaged in the Russian Civil War, this division waged an intense and brutal campaign against Bolsheviks that stretched through Poland, Lithuania, and into Lativia. Guderian used this time to develop his theories for mobile tactics, and in 1922 he was appointed the Army’s Inspector of Motorized Troops, a promotion that cemented his career within mechanized warfare.

Guderian rose through the ranks steadily, promoted to major 1927, when appointed to the Army’s command of transport and motorized tactics at Berlin, Lieutenant Colonel in 1931, and Colonel in 1933. He developed a reputation as a radical thinker, but many superior officers were uneasy with his transformative ideas.

Guderian’s bold, almost brash, tactics, tendency to alienate anyone who disagreed with him, and perennial habit of arguing with senior officers, generated a solid core of resistance against his ideas.

Frustrated, Guderian resorted to publishing his theories, which established his credentials as an eminent theorist in mechanized warfare, and he carefully followed his foreign counter-parts in France, Great Britain and the United States. Technology was evolving quickly, and Guderian began to envision a doctrine that emphasized coordinated, rapid movement between a powerful tank corps, mechanized infantry, and, increasingly, aircraft. The burgeoning potential of air power was not lost on the theorist.

Guderian’s promotions coincided with the rise of Adolf Hitler, and Germany’s massive rearmament program created an opportunity to bring the theorist’s concepts into reality. Guderian wrote a book entitled Achtung – Panzer! that laid out his theories, described the implications of a massive tank force, emphasized the importance of Germany’s rearmament… and caught the eye of the Fuhrer. His progress into the army’s highest ranks increased immediately, and on February 4, 1938, he was assigned command of the XVI Army Corps and promoted to Lieutenant General.

The newly promoted general could not have asked for a more powerful advocate, and Guderian’s theories appealed to Hitler’s desire for conquest, slaking the Fuhrer’s thirst by insisting on forward movement, outflanking prepared positions through mobility, and denying the enemy a chance to regroup. Guderian’s newfound connection with Hitler was not enough to overcome the resistance against his ideas, and when Nazi Germany smashed into Poland, he hoped to prove his theories on the battlefield.

Guderian commanded the XIX Corps during the invasion. Comprised of one panzer division and two motorized infantry divisions, the corps was capable of fighting the mobile war he envisioned, but the Poles lack of mechanized forces and outdated defenses did not allow Guderian to truly test his ideas. The upcoming invasion of France, however, was another matter.

Germany’s original plan to invade France satisfied no one. Known as Aufmarschanweisung N°1, Fall Gelb, the plan was a repeat of Germany’s WW I invasion strategy, and called for attacking the Allies through central Belgium. Lieutenant General Eric von Manstein hated the plan, decided the situation called for radical thinking, and quietly reached out to Guderian. Manstein knew the high command would reject any plan associated with the argumentative Guderian, and worked with him in secret.

Manstein was not disappointed. Guderian proposed avoiding the main body of the Allied armies by launching a blistering mechanized assault through the Ardennes forests to surprise the enemy, cut their supply lines, and isolate them against the English Channel. The plan was audacious and risky, and Guderian’s role in developing the strategy remained hidden until personally approved by Hitler.

Guderian’s corps smashed through the Ardennes, crushed the French lines at Sedan, and opened the way for his panzer group’s swift advance to the coast. This divided the allied armies, and should have ended in their complete destruction. Guderian’s request to destroy the encircled allied armies was denied, however, leading to Germany’s first great debacle of World War II, but the general’s theories had succeeded wildly. The invasion of France vindicated his life’s work by smashing Germany’s old enemy, and he’d earned Hitler’s personal favor. It was not to last.

The plan to invade the Soviet Union bore many of the Fuhrer’s personal fingerprints, and Guderian undercut his position by openly challenged the strategy’s weaknesses. Ultimately, Guderian swallowed his objections, and when Nazi Germany invaded Russia on June 22, 1941, he crossed into the Soviet Union commanding the aptly named Panzer Group Guderian. Initially, Guderian performed magnificently.

After capturing Smolensk, the military upgraded his Knight’s Cross with Oak Leaves for his rapid conquest, and the tension between Hitler and Guderian eased. Shortly before the planned assault on the Moscow, however, Guderian received orders to break off and head south. His protests were ignored. Fuming, Guderian followed his orders and moved south where he played a major role in encircling the Soviet armies and capturing the city of Kiev. Moscow, he thought, would have to wait until after the oncoming winter passed.

Guderian’s new orders to proceed back to Moscow immediately appalled him. Guderian objected, pointing out that his army was exposed and vulnerable to attack. Unsurprisingly, he was ignored. The Soviet’s counter-attacked shortly after he arrived at Moscow, proving Guderian right, and he asked to withdraw, arguing that he could not hold his position.

High Command refused his request, and Guderian broke all military protocol by ignoring his commanders and arguing with Hitler personally. The Fuhrer, however, would not permit any form of retreat. Furious, Guderian disobeyed orders immediately, pulling his troops back. Unsurprisingly, Guderian was relieved of his command shortly thereafter.

Guderian was too talented for Germany to leave him on the sidelines, but a year passed before he was recalled to duty. Following the Nazi’s devastating defeat at Stalingrad, Hitler appointed him to the Inspector General of Armored Troops. The panzer divisions had suffered enormous losses throughout the fighting in the Soviet Union, and Hitler needed Guderian’s expertise to rebuild the armored forces.

In his new position, Guderian would advise Hitler personally on armored tactics and strategy, oversee design, production and the training of new panzer crews. Guderian would not, however, ever hold a combat command again.

Colonel-General Heinz Guderian had the vices of his virtues. Highly intelligent and well-educated, Guderian’s willingness to explore new ideas and theories contributed to his success as a combat general, and played a major role in the evolution of warfare. His brash manner, stubborn refusal to entertain people who disagreed with him, and persistence in arguing with superior officers, earned Guderian numerous enemies throughout the high command.

Many of the problems that stalled Guderian’s ideas throughout his career stemmed from the animosity his personality created with fellow officers, and his inability to temper his argumentative nature forced the general who developed the blitzkrieg into a desk job.