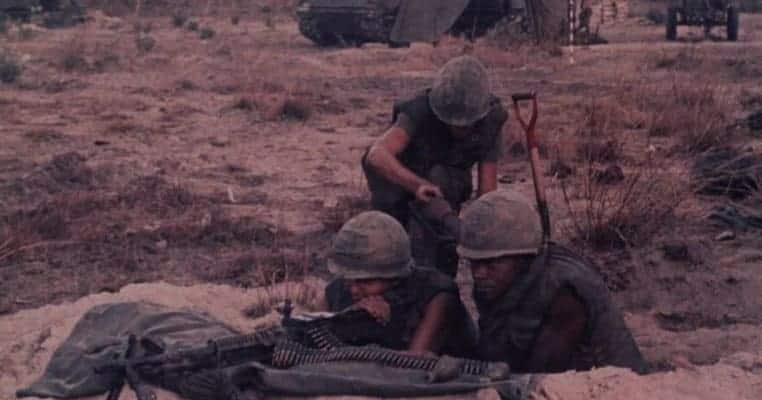 21. The US Coast Guard provided over 8,000 personnel for service in Vietnam

One of the least known stories of the American involvement in the Vietnam War, the US Coast Guard provided ships and patrol boats, manned long range aids to navigation stations after they built them, and supported the American war effort with aviators for patrols and air and sea rescue details. Fifty-six Coast Guard cutters supported the effort to prevent Vietnamese waterways from being used to supply and reinforce the Viet Cong and North Vietnamese troops in the south. When the policy of Vietnamization was announced and the American withdrawal began, 30 of the cutters were delivered to the South Vietnamese.

They didn’t know how to operate the cutters, nor most of the equipment on them, nor how to maintain them in the harsh climate, where maintenance was critical. The Coast Guard established training schools which were extensions of those in which they had themselves been trained. The training provided by the Coast Guard, as well as the cutters, provided the nucleus of the South Vietnamese Navy for the duration of the war. All members of Coast Guard cutter crews and support personnel were also given a one day survival training course, conducted in the Philippines, prior to deployment in South Vietnam.

22. Lessons learned were included in training as American commitment to the war waned

The Navy’s Top Gun school was formed as an effort to learn from the mistakes made in combat in Vietnam and was highly successful at correcting them. But it was an effort which improved only the Navy and Marines’ efforts in the war. The Air Force continued to rely on technological improvements, as well as a strategy which clearly failed to produce the desired results. The same was true throughout the services, in some areas lessons learned in combat were included in training programs while others were ignored by a hidebound command system, both military and civilian. Some of the training received by new recruits in the United States was immediately overturned by local junior officers and senior non-commissioned officers in Vietnam

American doctors learned to carry side arms while conducting Medical Civil Action Programs (MEDCAP) which provided medicine and examinations to villages and hamlets. American medical professionals also led a drive to identify all prostitutes, giving them identification cards with photographs. If an American serviceman came down with a sexually transmitted disease, its source could then be identified and treated. The developments of medical care trauma teams in Vietnam – the MASH units – were studied and applied to civilian emergency care, after a 1966 report described the subject, and led to the development of emergency medical technicians in the United States.

For enlistees and draftees, the first stop of military service was boot camp, and for many it remained the toughest stop of the military career. Boot camp in all branches was designed to eliminate all individuality of civilian life. Soldiers, sailors, airmen, and marines were made to look the same, dress the same, and sound the same. Every day began before sunrise, sometimes before 5 in the morning, and seldom if ever later. Every minute of the ensuing day was scheduled. The trainees wore what they were told to wear, carried what they were told to carry, and ate what was served to them, whether they wanted it or not.

Even the length of time a trainee spent in the shower was predetermined, as was the method of showering, though it varied from service to service. Individual physical fitness was of little concern to the drill instructors. Trainees ran until they completed the length they were assigned, or until they dropped. Those who dropped were expected to complete the distance after brief recovery. The whole purpose of basic training was to deliver to the ensuing schools or assignments a military machine in a human body, ready to be shaped by additional training into a valuable asset for the branch of service represented by the uniform it was wearing.

24. Early training included the rules of military life in the form of the Uniform Code of Military Justice

The Uniform Code of Military Justice, known to all who served in the military as the UCMJ was (and is) a concise listing of military law, passed by Congress and signed by President Truman in 1950. Its edicts apply to all members of the military no matter where they are stationed or physically placed anywhere in the world. Early in basic training the trainees were familiarized with the UCMJ and continually reminded of it during their time in the service. Copies were prominently displayed on barracks walls, in Navy heads and Army latrines, in mess halls, classrooms, and the training documents issued to every service member.

Along with the UCMJ trainees were quickly indoctrinated in the Code of Conduct, indeed, to the point of memorizing it and reciting it to the satisfaction of their drill instructor. The Code was established by Executive Order of President Eisenhower. It contained (and still does) six articles. Within one week of arriving at basic training most recruits were expected to recite verbatim any of the articles upon the demand of a drill instructor, often made with his face less than an inch from that of the recruit. The price of failure was often physical pain, inflicted in a variety of ways.

25. Memorization was often a necessary part of military training

The ability to give a correct answer to a question through memorization of the answer, rather than comprehension of the subject, was a valuable trait during military training. One of the first requirements of recruits was to learn the General Orders of a Sentry. During the Vietnam era all branches of the military used the same orders, as did the Coast Guard. Their authorship is unknown, they appeared in the Navy Sailor’s bible, The Bluejacket’s Manual, in 1902. Some have ascribed their authorship to George Washington in the Continental Army’s encampment in Cambridge in 1775. The eleven orders were, like the Code of Conduct, expected to be known verbatim by anyone wearing a military uniform.

The Navy version differed from that of its land based compatriots (who don’t generally have an Officer of the Deck to report to) but the differences during the Vietnam War were minor in nature. A common scenario in basic training was a recruit dropping in utter exhaustion following a five mile run while carrying up to forty pounds of equipment, only to hear the voice of his drill instructor demanding to know the fifth general order of a sentry. Woe betide the unfortunate trainee who did not leap to attention and respond, “Sir, the fifth general order is Sir, â€˜To quit my post only when properly relieved’, Sir”.

“Trial by Fire: A Carrier Fights for Life”. Training Film, US Navy. 1973. Online

“US Combat Advisers Knew the Score and Got Ignored”. James A. Warren, Daily Beast. April 3, 2018

“Glossary of Military Terms & Slang from the Vietnam War”. The Sixties Project. 1996. Online

“An Assessment of All-Volunteer Force Recruits”. Report to the Congress by the Comptroller General. General Accounting Office. February, 1976

“Dogs at War: Left Behind in Vietnam”. Rebecca Frankel, National Geographic Magazine. May, 2014