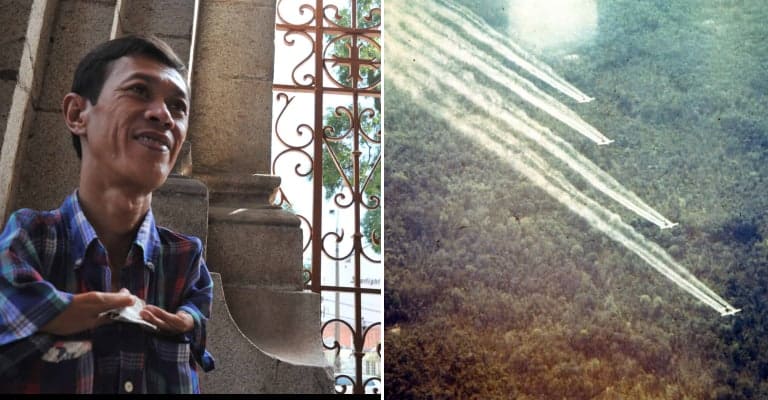 The Vietnam war was fought in a setting quite alien to US troops and military command: thick tropical jungle. To combat the use of those jungles as a hiding place for North Vietnamese forces, the US employed mass spraying of herbicides to defoliate the forest and kill the enemy’s crops. Throughout the conflict, over 4 million acres in Vietnam, Laos, and Cambodia were sprayed with herbicide, which was applied by airplane, helicopter, boat, and by hand. In addition to enemy locations, the perimeters of US military installations were also kept neat and deforested by the same application.

At the time, it was believed that the combination of two herbicides being used was utterly harmless to humans, so nobody wore protective equipment when using the mixture; and nobody thought about the safety of the Vietnamese, Laos, and Cambodian populations being exposed to it. The two herbicides, 2,4,5-T and 2,4-D, are famously known when combined as Agent Orange. When blended, these potent herbicides create a highly toxic dioxin compound known as 2,3,7,8-Tetrachlorodibenzo-p-dioxin, or TCDD. It was this very compound that was used against Ukrainian President Viktor Yushchenko in an attempted assassination by poisoning in 2004.

In current research, TCDD is universally recognized as a potent toxin to the human body. Developmental toxicity, meaning harmful effect on fetal development, is considered the most severe result of exposure. TCDD is also considered as a carcinogen or cancer-causing agent. It was classified as a group 1 carcinogen by the International Agency for Research on Cancer in 1997, which means there is sufficient evidence of cancer being caused by exposure to the agent. Other group 1 agents include famed carcinogens asbestos and radium.

TCDD acts via a receptor found in all cells, the aryl hydrocarbon receptor. This receptor is a transcription factor, which means it is involved in the expression of genes. It is the role in gene expression that causes TCDD to have a toxic effect on embryonic and fetal development. In rats, high exposure to TCDD causes an increase or decrease in the expression of hundreds of various genes. While there is some debate in the body of research, TCDD is generally considered both mutagenic and genotoxic, or a compound with the ability to damage the genes in an organism and within the organism’s cells.

While also controversial in scientific research, there is documented evidence of teratogenic, or congenital disabilities, effects of TCDD. The evidence of birth defects in those exposed to TCDD in utero is well documented; however, the causal impact of TCDD being responsible for the effects is less certain due to poor methodology, which is at least in part due to the politicized nature of the topic. The US Government has long been loathed to acknowledge any harm caused by Agent Orange, as it could result in enormous costs for compensation of loss of life and other health effects. US Court rulings allowed payment to disabled veterans harmed by Agent Orange, but intentionally omitted any liability for disabled children born to veterans affected by exposure to Agent Orange.

Starting in the mid-1970s, veterans of the Vietnam Conflict began reporting chronic health issues to the Department of Veterans Affairs. While some veterans suspected it was due to exposure to a chemical agent while serving overseas, the government refused to acknowledge any wrongdoing. Since at least 1978, lawsuits have been filed against the private firms that manufactured Agent Orange, including agricultural giants Monsanto and Dow Chemical. In 1980, a sergeant offered the first ever deposition related to Agent Orange illness, as he was dying from an inoperable brain tumor he argued was caused by extensive exposure to Agent Orange.

Despite denying any wrongdoing and denying the toxicity of Agent Orange, several major chemical companies settled out of court before a jury trial could begin. Many veterans were outraged by the settlement, as they wanted their day and court and for the US public to learn more about the damaging effects they suffered from Agent Orange exposure. The results of the class action lawsuit ended up being very poor, as a fully disabled veteran would only be eligible for $12,000 paid out in installments over 10 years. This “income” was also subject to means testing and could render disabled veterans ineligible for food stamps and other forms of public assistance.

Widows of disabled veterans were only eligible for a one-time payment of $3,700. Many veterans their families were naturally dismayed to learn how little their illnesses and lives were worth. As recently as 2004, Monsanto has gone on record with spokespersons stating that while they feel sorry for the veterans, they believe the science shows Agent Orange is not responsible for their illnesses. Thankfully, in 1991 Congress passed the Agent Orange Act which authorized the Veterans Administration medical system to cover treatment for Agent Orange related cancers and other diseases.

In an even more brutal ruling, a class-action lawsuit brought by Vietnamese victims of Agent Orange exposure was dismissed out of hand by the very same judge, Jack B. Weinstein, who agreed to the settlement of the US Veterans’ class-action suit. Weinstein argued that there was no legal basis for their case, as Agent Orange was not listed as a poison at the time of its use and no treaties barred the use of herbicide in war. The lack of US government acknowledge of Agent Orange’s harm has continued to be a sticking point in relationships between Vietnam and the United States

The Vietnamese government cares for its Agent Orange victims through monthly stipends. The International Red Cross also raises money for those affected. Vietnam has also established “peace villages” with medical and psychological care for those affected. The centers are distributed throughout Vietnam. At least 11 villages still existed and were providing care to over 1,000 afflicted individuals as of 2006. Many US Vietnam Conflict veterans support the efforts of these villages and help raise funds for their continued operation.

A Continuous Legacy of Suffering

The harm of Agent Orange exposure continues to linger both in the US, through the bloodlines of those exposed during the Vietnam Conflict, and in Vietnam itself both through a ravaged landscape and the continued illnesses of the exposed population. A famous case of the generational effects of Agent Orange exposure is that of veteran Mike Ryan. He and his wife had a daughter born with spina bifida and numerous other congenital disabilities. They had no family histories of birth defects or genetic disorders, and both avoided alcohol, tobacco, and drugs and were relatively healthy during her pregnancy. Ronald Reagan met with the Ryan’s in 1980 to hear their concerns but ultimately encouraged the government to block the veterans’ class-action lawsuit and omit offspring from financial support.

Another veteran, Royal Gee, had a healthy daughter before serving in Vietnam. The daughter born after he returned from service suffered from an immune system disorder, joint issues, and chronic cysts. Many more veterans continue to come forward with stories of children and even grandchildren being born with congenital problems. Within Vietnam, many adults are living with extensive disabilities due to gestational exposure to Agent Orange. Some of these individuals have had children born with health issues as well, again indicating a lasting effect on the genetic material of those exposed.

In Vietnam, it is estimated that over 400,000 people have died due to exposure to Agent Orange. Thousands of Vietnamese children were born after the war with cleft palates, deformed limbs, and many other congenital health issues due to gestational exposure. Many US military installations, especially former air force bases, continue to be polluted with dioxins at a dangerous level that would require special decontamination procedures. Silt runoff from forests treated with Agent Orange continues to be dangerously high. Dioxin has also entered the Vietnamese food supply through bioaccumulation, rendering some dangerous foods high in dioxin levels.

In addition to human suffering, Agent Orange had a devastating effect on the ecosystems of Vietnam, Laos, and Cambodia. Millions of acres were sprayed with Agent Orange, which led to extensive deforestation. Countless mangrove forests were destroyed. The extent of the deforestation made some land impossible to reforest and restore. Studies have found drastically reduced numbers of animal species living within areas contaminated with Agent Orange. A study by Harvard biologists found only 24 bird species and five mammal species in a defoliated area, while between 145 and 170 bird species and between 30 and 55 mammal species lived in a neighboring forest that was not sprayed with Agent Orange. These findings indicate a staggering loss of biodiversity in affected forests.

Rapid, unsustainable urbanization is another lasting legacy of Agent Orange. Many fields of food crops were intentionally destroyed with Agent Orange in an effort to weaken enemy forces. This led to mass starvation and many Vietnamese citizens fleeing to cities seeking work after farms failed. As a consequence of the targeting of farmlands, the urban population of South Vietnam tripled during the conflict, with over 8 million people being urban residents by the end of 1971. Such rapid urbanization led to housing crises and the development of overcrowded slums. In Saigon alone, over 1.5 million people were estimated to be living in underdeveloped slums.