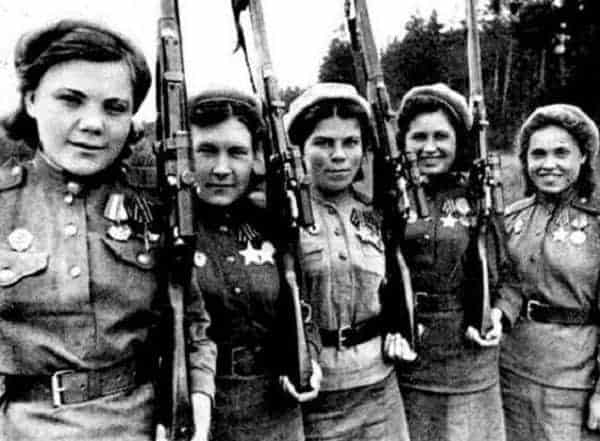 As was the case throughout most of history, fighting during the Second World War was mostly a male occupation. However, “mostly” is not the same as “all”, and during the course of the conflict, hundreds of thousands of women took up arms and participated directly in combat. Many fought as partisans in Eastern Europe and the Balkans, or as uniformed members of the Soviet military – the only country that deployed women into combat in significant numbers. The Resistance movements of Western Europe also saw numerous women taking up arms and taking part in combat. Following are forty fascinating things about some of the warrior women of World War II.

40. The Soviets Mobilized Women For the War Like No Other Country

In the US, Rosie the Riveter is rightly praised as a symbol of women’s contribution to the war effort, and as a harbinger of women’s increased presence in the workforce. However, America’s mobilization of women for the war was far exceeded by that of the Soviet Union, which made more extensive use of women in its war effort than any other WWII combatant.

In addition to employing women in armaments factories and in other roles contributing to the wartime economy, the Soviets inducted women into the Red Army. Not in auxiliary uniformed outfits, such as America’s WAVES, but directly into the Soviet military. During the war, over a million women served in the Red Army. While most of them performed support roles, such as supply, transportation, or medical care, roughly 100,000 Red Army women fought in the main battle line as snipers, tank crews, combat pilots, or straightforward frontline infantry.