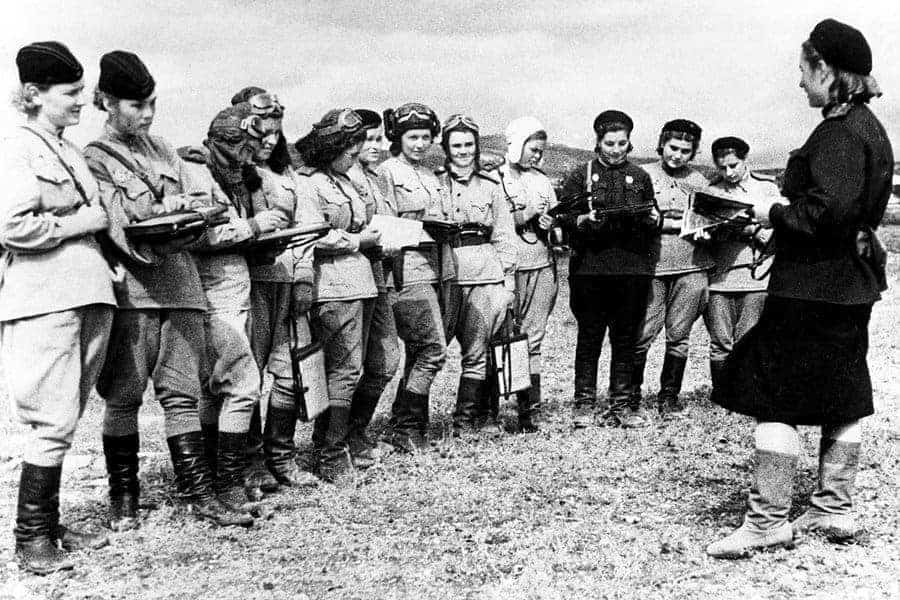 In the United States, the history of the Women’s Air Service Pilots (WASP) is reasonably well known, and their heroics are celebrated. Far less is written about their Russian counterparts, the Night Witches of the 588th Night Bomber Regiment. From 1942 to 1945, this all-female squadron dropped 23,000 tons of bombs and was feared by the Nazis. Indeed, it is the Germans who gave the female pilots their nickname (because their planes sounded like a witch’s broomstick), and any Nazi pilot that downed one of the Witches was awarded an Iron Cross.

Formation of the Witches

When the Soviet Union became embroiled in World War II, women were initially forbidden from entering combat. The attitude of the Soviets quickly changed when the Germans started laying waste to their territory. On October 8, 1941, Stalin ordered the deployment of three female air force units. Colonel Marina Raskova oversaw the establishment of the units although only the 588th remained entirely female for the duration of the war.

Raskova was already renowned as a pilot of considerable skill, and in 1938 she broke the world record for a non-stop direct flight by a female with two other women. The trio flew their aircraft some 6,000 kilometers from Moscow to the southeast of Siberia. When they arrived in Siberia, their plane froze and was destined to crash. Raskova brilliantly navigated the plane to safety, and all three women survived. They received the Hero of the Soviet Union medal, and Raskova’s achievements played a significant role in persuading Stalin to form the female regiments.

By November 1941, the situation looked desperate for the Soviets as the Nazis placed Leningrad under siege and were less than 20 miles from Moscow. The Soviet air force was all but grounded so the new regiments had even more responsibility. The ranks of the 588th swelled in early 1942 with the majority of pilots aged 17 to 26. Raskova quickly asserted her authority and the pilots were left in no doubt as to the importance of their role.

Each pilot received standard military boots, poorly fitted uniforms designed for larger male troops, and they all cut their hair short. The first challenge faced by the 588th was the poor quality of their equipment. They only had Polikarpov Po-2 aircraft; plywood framed planes with canvas pulled over them. They were terrible even by the standards of 1942! Perhaps worst of all, the aircraft were slow, light, and had no armor.

The planes also had an open cockpit, so the women had to endure the bitter Soviet weather as they flew; frostbite was a common complaint! On the plus side, the planes had a slower stall speed than enemy craft which meant they were hard to target. It was also incredibly easy to fly the aircraft, and the pilots could take off and land just about anywhere.

Despite the poor quality of their planes, the Night Witches were enthusiastic about their role in the war and embarked on their first mission on June 8, 1942, a three plane raid on a German division headquarters. The mission was a success although the Witches lost a plane.

The Night Witches were seemingly indefatigable as they flew thousands of missions during the war right until the conclusion of the conflict. At its strongest, the 588th contained approximately 40 planes (two women per craft), and on their busiest nights, they would complete up to 18 missions! The Polikarpov Po-2 planes were only capable of holding six bombs at a time, so when the load was dropped, the pilots returned for more bombs and got back to work.

Accurately quantifying the bravery of these women is difficult. Their planes needed to fly at low altitudes which meant they were easy to spot and the pilots had no parachutes. Also, they navigated by reading maps and compasses as they didn’t have radar. Therefore, the Witches could only fly at night under cover of darkness and use their incredible navigation prowess to arrive at their destinations. Once they reached their target, the pilots killed their engines and glided over the drop site to ensure they were not seen. The 588th was so successful that some Nazis believed the women used special pills to give them the night vision of a cat!

It was normal for the planes to return riddled with bullets, so it was remarkable that the 588th didn’t suffer more losses. Nadezhda Popova is one of the most famous Night Witches; she flew an estimated 852 missions. On one occasion, Popova returned from a mission with 42 bullet holes in her plane. There were even holes in her helmet and map, yet miraculously the pilot wasn’t hit nor did her flimsy plane fall apart.

One of the biggest problems to face Russian pilots was the German searchlight and flak gun combination. They placed both around likely targets in a concentric circle so when two planes flew across the perimeter in a straight line, they were destroyed. To combat this issue, the Witches flew in groups of three. Two of the planes would fly through the trap only to suddenly veer away once the searchlights were pointed at them. The third plane came out of the darkness and hit the target. The three planes switched positions until all their bombs were dropped.

Despite their bravery and success, the 588th faced resistance from within their ranks. Even after clearly demonstrating their prowess, the Night Witches were dismissed by their male counterparts in the Russian military. One general complained because he was sent a ‘bunch of girlies’ when he asked for soldiers. This lack of respect only served to increase the determination of the pilots who embraced their identity as women. Some of the crew used navigational pencils to paint their lips and they drew flowers on the side of their planes.

The Night Witches were involved in approximately 30,000 missions, and despite their low-quality aircraft that were little more than sitting ducks on some occasions, the regiment lost just 30 pilots in total. Popova and 22 other Witches received the title Hero of the Soviet Union. The squadron wasn’t disbanded at the end of the war. Instead, it was renamed the 46th Taman Guards Night Bomber Aviation Regiment and continued to fly missions for the Soviets.