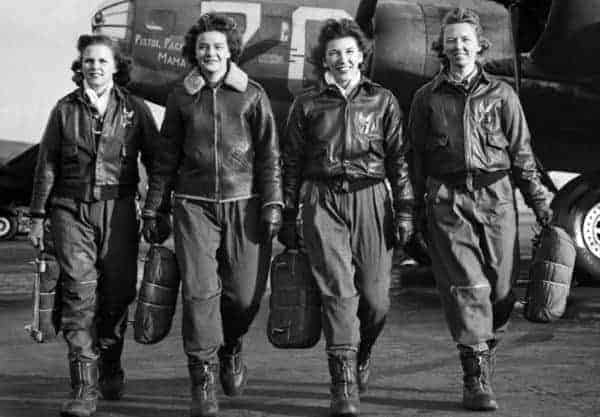 It was not until March of 2016 that the House of Representatives finally passed a bill that allowed female pilots from World War II to be buried in the Arlington National Cemetery.

Republican Representative Martha McSally from Arizona sponsored the bill, which passed with a breathtaking 385-0. The female pilots, known as WASPs or Women’s Airforce Service Pilots, will now receive the option for either above-ground urn space and burial plots.

Senator Joni Ernst, a Republican from Iowa, and Democratic Senator Barbara Mikulski from Maryland introduced a similar bill in the Senate.

In May of the same year, President Obama signed H.R. 4336, an act to amend title 38, into law, which explains “persons whose service has been determined to be active duty service.”

Having a bill like this in effect may seem commonplace, but it reflects the struggle these women pilots have been facing for decades. That culmination of equality is all too relevant. In fact, the WASPs organization was formed in 1942 to allow male pilots to dismiss their civil duties and serve during World War II.

Over 1,000 women joined the United States Army Air Forces under the pretenses of ferrying and flying military aircrafts along with serving for administrative purposes.

Nevertheless, in 2016, the Secretary of the Army believed the president did not have the power to change the military’s ruling. Only Congress, not President Obama, can create a law that will allow WASPs to be eligible for burial in the Arlington National Cemetery.

Up until 2002, the cemetery’s policy allowed WASPs to be buried with full military honors, but John McHugh, the Secretary of the Army at the time, reversed this ruling. In fact, he stated that women should never have been allowed in the cemetery in the first place. Because of his reversal of the longstanding tradition of burying the female pilots with full military honors, the bipartisan bill was introduced.

In 2014, the military misinterpreted a 1970s law and excluded female pilots regardless of their veteran flight work. Therefore, the WASPs were denied the right to be buried there even though they flew combat aircrafts from 1942-1944. The interpretation was concluded based on the limited space of the cemetery.

In argument, the WASPs were not looked at as active troops during World War II. The women wore uniforms, conducted drills, and even received military training, but they were classified as paramilitary, or a civilian organization; this was done so because their male counterparts lobbied for such a call.

Further, the program itself was criticized by the media and people alike who were in opposition to female pilots. All-the-while, the WASPs were doing their part to fight against Nazi Germany.

Despite critics thinking it was unnatural for women to fly planes, 38 WASPs died for their country. Even so, they were forced to pay for their own supplies like lodging and uniforms. Their families had to pay to bring the deceased bodies home.

The WASP organization of World War II ended in 1944, but it took decades for the pilots to earn their benefits or receive any recognition at all for their service.

It was not until 1977 that the female pilots were acknowledged as veterans thanks to various dossiers proving the ladies participated in military discipline and top-secret plane missions. In 2009, the gallant WASPs earned a Congressional Gold Medal.

The family of 2nd Lt. Elaine Danforth Harmon is especially happy about the new bill because they have been fighting for years to have her buried at the Arlington National Cemetery. They started a petition in their efforts, which received over 178,000 signatures.

Elaine Harmon passed away in April of 2015 at the age of 95. Her last dying honor was to be buried at Arlington National Cemetery. The late pilot’s ashes sat in her daughter’s closet until the she could fulfill her mother’s last wishes.

Thanks to the bill President Obama passed, over 100 WASPs who survived World War II and are still alive have the option to join their fallen brothers and sisters in burial. Unfortunately for others, it is simply too late.

The law of the time forbade WASPs to see or fight combat during World War II. However, that is not to discredit their essential role throughout the war. These courageous women flew planes around the world, transported people and supplies to America and other countries while the male pilots were subject to enemy forces.

It was only because of the WASPs duty to step up during World War II that released the men to become the front-line pilots during combat.

Representative Martha McSally is a female A-10 Thunderbolt II pilot. She testified that the WASP program “opened the door for people like me being able to serve.” Rep. McSally valiantly flew in combat missions over Iraq.

There is no denying that women are welcomed into the Air Force in the 21st century. Since the First Gulf War, female pilots have fought missions.

They now firmly hold their position in every air campaign. It was the WASPs that paved the way for gender equality in the Air Force, and society in general.

This bill not only acknowledged the right WASPs have to be buried in Arlington National Cemetery, but also the fact that women need to be accurately recognized for all of their war efforts.