The Strength of the Streets: The 12 Most Important Protests in Human History 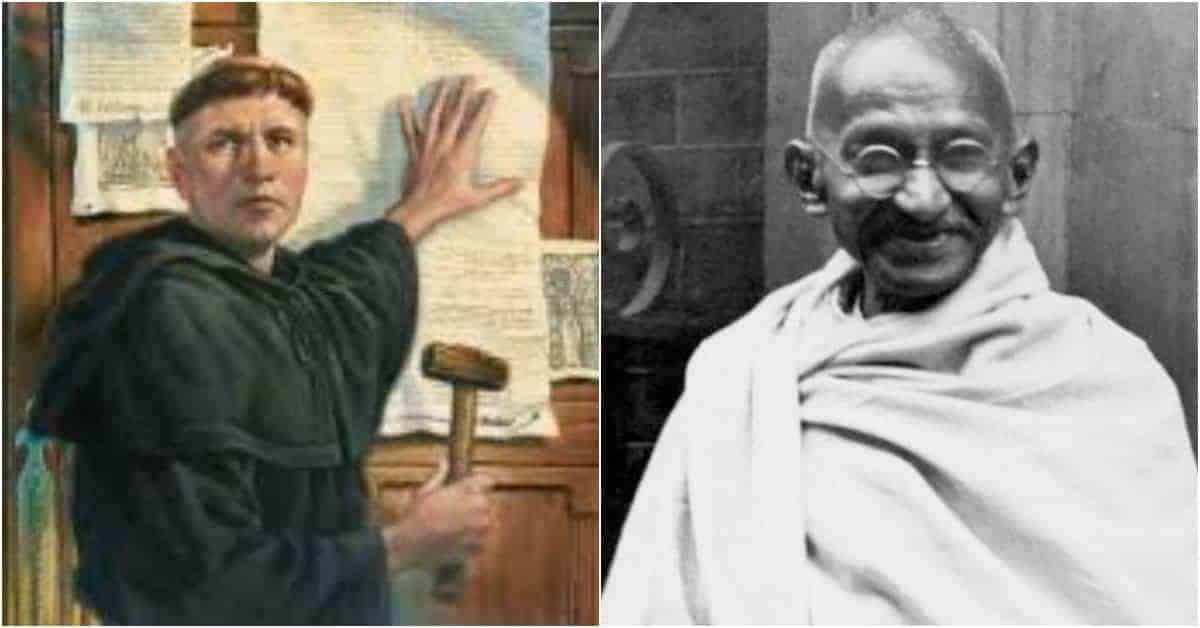 The Strength of the Streets: The 12 Most Important Protests in Human History

Gandhi had paved the way in the use of civil disobedience as a protest tactic, and his example did not go unnoticed. The power of non-violence and symbolic rule-breaking would be used to great effect in the struggle for civil rights in the United States as well, beginning with the simple actions of one woman on a bus in Alabama.

Rosa Parks is one of the most revered people in America, and her actions on December 1 1955, would change the USA, and the world, forever. Ms. Parks was far from a novice in the arena of civil rights protest: she had been a member of the National Association for the Advancement of Colored People (NAACP) for several years and had even studied nonviolent civil disobedience. When she was told to get up off her seat and move to the back of the bus on that December day in Montgomery, it was not a new experience – in fact, she had been kicked off a bus by the same bus driver some twelve years before – but it would be the last one that she was willing to take.

At the time, segregation in the South was at its height. In Montgomery, Alabama, there were no black bus drivers, black people were often forced to give up their seats to white people and were required to sit at the back. When Rosa Parks refused to move, she was arrested, found guilty and fined $14. In response, the black community, who made up 75% of passengers, decided to boycott the buses. They arranged to carpool and to offer rides to those who needed to work, taxi drivers charged the price of the bus, people walked and some even rode mules: soon, the bus system was suffering major financial distress.

The whites of Montgomery began to attack black churches and the campaign leaders, Martin Luther King Jr and Ralph Abernathy, had their houses firebombed. 90 people, including King, were arrested for “conspiring to interfere with a business” and instead of evading capture, proudly handed themselves in. Dr King was jailed and gained national press attention.

After just over a year, the boycott was successful after the Supreme Court declared bus segregation was illegal. While black passengers could now sit almost everywhere on the bus, that faced a backlash of violence from the white community: snipers fired at buses, black churches were destroyed and a man, Willie Edwards was lynched. Yet, Montgomery had set the tone for the nation.

The Civil Rights movement, led by Dr. King, would grow from strength to strength. Civil Rights Acts were passed in 1957, 1960, 1964, 1965 and 1968 after constant pressure from below that forced the authorities to act.

As the Civil Rights Movement was in full swing in America, on the other side of the world in Vietnam, the United States was beginning to involve itself in a war that would devastate the whole country. A whole entry for this list could be written about the role of anti-war protests in ending that war, but instead our focus is on one of the defining moments of the start of the conflict.

While Gandhi and Dr. King used non-violent civil disobedience to make their stands, the Vietnamese Buddhist monk Thich Quang Duc used self-inflicted violence to raise awareness of his cause, creating a lasting image perfectly designed to capture the attention of the world’s media.

Thich Quang Duc was a Buddhist monk and as such, totally opposed to violence of any kind. The vast majority of Vietnamese were Buddhists, but the President, Ngo Dinh Diem, was a Catholic and was widely seen to favor Catholics in positions of office and prominence within the military and civil service. While government events often saw the Vatican flag fly alongside that of Vietnam, Buddhist symbols were banned and when Buddhist activists protested against the government, nine people were killed. The Buddhist hierarchy decided that something had to be done and Quang Duc, a leading monk, volunteered.

Media organizations, particularly from the United States, who were the largest backers of the Diem regime, were informed that something was to happen outside the Cambodian embassy in Saigon on June 10. As Duc sat in the traditional position of meditation, he was doused in petrol and set alight. He quickly burned to death, but not before photographer Malcolm Browne had taken what would go on to become one of the most iconic photographs of all time.

Duc left a note that explained the reasoning behind his protest, stating simply: “Before closing my eyes and moving towards the vision of the Buddha, I respectfully plead to President NgÃ´ ÄÃ¬nh Diá»‡m to take a mind of compassion towards the people of the nation and implement religious equality to maintain the strength of the homeland eternally.”

It had the intended effect. The self-immolation, combined with coordinated protests, lead to the US increased pressure on Duc and eventually, to the Buddhist community receiving concessions from the regime. Thich Quang Duc instantly became a revered figure among Buddhists: his heart, which was never burned in the incident and then survived a second cremation, has become a relic for Vietnamese Buddhists and the then US President John F Kennedy remarked that “no news picture in history has generated so much emotion around the world as that one.”

For our penultimate protest, we are staying in East Asia, but moving to the North. What to call our next protest is debated and depends on where you are and what your pre-existing opinion is. Known in the West as either the Tiananmen Square Massacre and in China as the June Fourth Incident, the events of June 4, 1989, have become one of the defining political moments of recent years, a watershed (or bloodshed) for nascent political dissent in China and something of a forebearer of things to follow.

The end of the 1980s represented the biggest sea change in world politics since the great uprisings of 1968 and a landmark moment in which the world balance of power shifted. The so-called “second world” communist societies had begun market-orientated reforms throughout the Eighties and from Gdansk to East Berlin to Moscow and Beijing, people were taking advantage of liberalized freedom of speech laws and the political weakness of the state to challenge the long-held orthodoxies.

While the protests in Eastern Europe would ultimately see the collapse of the Berlin Wall and the Iron Curtain, in the Far East, the government dealt with dissent in a far more decisive manner. In China, there was growing anger, particularly among the young, about the way that the country was headed. Market liberalization had benefitted some, but plenty of others, especially students and recent graduates, could not see where they fitted into the new China. In Tiananmen Square, Beijing’s central plaza, hundreds of thousands had gathered to demand more democracy and accountability in government.

Initially, the authorities let it run, but as the summer continued, it became clear that the protestors were not giving up. Students began a hunger strike and were joined by counterparts in 400 other cities. The regime declared martial law and began plans to send the troops in to clear out Tiananmen. On the evening of June 4, the action started. Soldiers were met by opposition sympathizers, who ignored TV messages telling them to stay home for their own safety, and opened fire. By midnight, troops were in the square and by the end of the night, anywhere between hundreds and thousands lay dead.

The image that endures from Tiananmen Square is that of the lone man standing before the line of tanks comes from June 5, by which point the army was in total control. In the coming months, mass arrests were carried out and many more executed. China still suppresses talk of Tiananmen Square and June Fourth and resisted the regime changes that would be seen in the Soviet Union, Eastern Europe and elsewhere.

Our most final famous protest is our most recent and, arguably, is still ongoing. The revolutions that broke out in the Arab World in late 2010 have defined the last decade or so of history, with regime changes and the fallout from the mass protests still being felt in the region and beyond.

Like so many of our protests, the Arab Spring began with the actions of just one individual and ballooned into mass movements that changed the face of society. The small individual that sparked the revolutions – quite literally, in this case – was Mohamed Bouazizi. A Tunisian street vendor who had been targetted by police and unable to sell his wares, he burned himself to death in front of the local governor’s office in the town of Sidi Bouzid. Protests against his treatment were instant and after weeks of solid demonstrations, the autocratic President of Tunisia was forced to flee after 23 years in power.

It was just the beginning. Demonstrations in neighboring Egypt began, with hundreds of thousands filling Cairo’s Tahrir Square to demand the fall of dictator Hosni Mubarak. Within three weeks, the power of the streets had spoken and Mubarak, who had been in charge of the North African nation for 30 years, had left the country. Nearly 900 people were killed in clashes between protesters and government forces, but eventually, the regime fell.

No sooner was Mubarak forced into exile than protests had begun in Libya, where strongman Muammar Gaddafi had been dictator since 1969. His hold on power weakened but was not totally overthrown: a civil war began between the opposition and government forces that would result in Gaddafi’s eventual demise in August of 2011 when he was killed by rebels in the city of Sirte.

As the war raged in Libya, a similar conflagration had begun in Syria, where President Bashar Al-Assad and his Ba’ath Party had held power since the early 1960s. Again, the war in Syria had begun as street protests demanding more democracy, economic reform and anti-corruption reforms, but in Syria, the waters would become murkier and murkier. The government reacted violently to protests and sparked the war, but after 6 and a half years, the situation has deteriorated and diversified into a conflict with multiple parties and no end in sight, not to mention a huge refugee crisis and untold misery.

The biggest political issues of our time – refugees, terrorism, lack of democracy, energy economics – do not stem from the Arab Spring, but the injection of local protests into the autocracies of the region has completely transfigured the way that we see the Middle East and North African region and cannot be underestimated.

History Collection – The Fall of The Bastille

The Conversation – Five of The Most Violent Moments of The Reformation

BBC UK – A Summary of The Chartist Movement

Time Magazine – What Actually Happened on the Original Bastille Day

We Forum – Who was Mahatma Gandhi and what impact did he have on India?

BBC – Tiananmen Square: What Happened in The Protests Of 1989?

PBS – Timeline: What Led to the Tiananmen Square Massacre