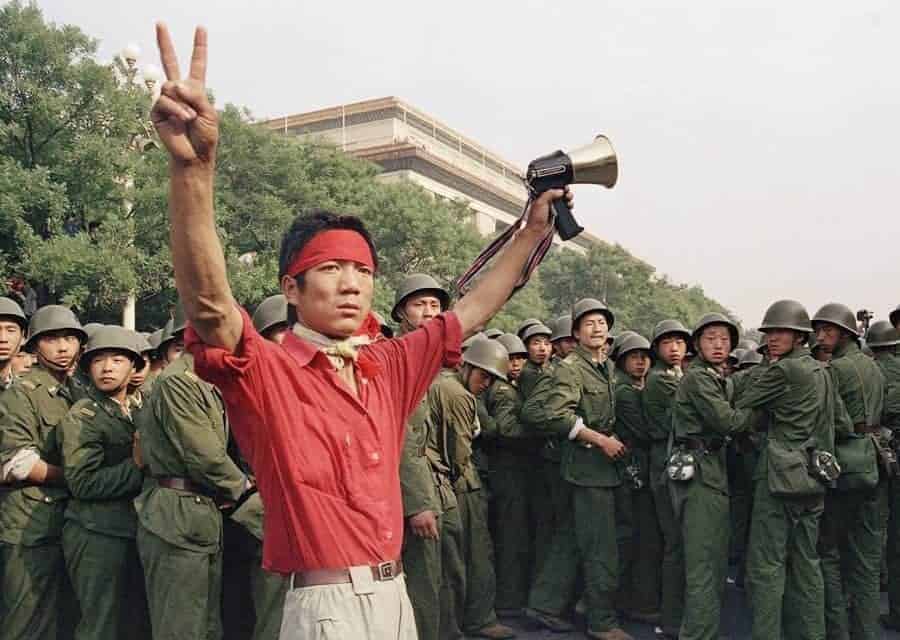 The Tiananmen Square protests of 1989, commonly known as the June Fourth Incident, were student-led demonstrations in Beijing. The protests were the culmination of a popular national pro-democracy movement. The protests were forcibly suppressed after the government declared martial law. The protests ended in a massacre.

China, in the late 1980s, was in the midst of rapid economic development stemming from radical economic reforms. The first reform, in 1978, involved the de-collectivization of agriculture, the opening up of the country to foreign investment, and permission for entrepreneurs to start businesses (although most industries remained state-owned). The second stage of reforms, in the late 1980s, involved the privatization and contracting out the State-owned industry and lifting price controls, protectionist policies, and regulations. State monopolies in banking and petroleum remained. These reforms benefited a small demographic and disaffected many. Common grievances included inflation, limited preparedness of graduates for the new economy, and restrictions on political participation. The legitimacy of China’s one-party system was beginning to be challenged.

Several years of disillusionment climaxed when General Secretary Hu Yaobang, whose western-inspired ideas and political liberalization caused him to be denounced by conservatives and he was forced into resignation. He became seen as a champion of the students’ political movement. When Yaobang died of a heart attack on April 15, 1989, the students reacted strongly. Students began to gather at Tiananmen Square to mourn the death of their beloved politician.

On April 21, the evening before Hu Yaobang’s state funeral, 100,000 students marched on Tiananmen Square. The students called for democracy, greater accountability, freedom of the press, and freedom of speech. Demonstrations continued over the next few weeks.

On May 13, two days prior to the highly publicized state visit by Soviet leader Mikhail Gorbachev, the students began their hunger strike. Gorbachev’s reception ceremony was planned to be held in the square and the student leaders thought the hunger strike would force the Chinese government into meeting their demands. By this time, there were 300,000 people gathered in the square.

Despite pleas from the government and minor concessions and relaxing the state-run media, students remained in the square during the Gorbachev visit. His welcoming ceremony was held at the airport.

On May 17-18, around a million Beijing residents demonstrated solidarity with the Tiananmen Square movement. The Chinese Red Cross sent a large number of personnel to provide medical services to the hunger strikers. Journalists from all over the world stayed behind after Gorbachev left to cover the protests. Western governments urged Beijing to exercise restraint.

On May 20, martial law was declared, and the government dispatched 250,000 troops to the capital. The army was met with resistance, and could not enter the square and was forced to retreat outside of Beijing, May 24. They were preparing for their final assault.

Troops with assault rifles and tanks killed at least 700 demonstrators trying to block the military’s advance towards Tiananmen Square. There has never been an official death count made. Estimates of the murders of pro-democracy protesters range up into the thousands.

It is currently illegal in all of China, except Hong Kong, to commemorate the June 4 massacre.

South China Morning Post – Tiananmen Square Crackdown: What The â€˜June Fourth Incident’ In 1989 Was About

The Guardian – Tiananmen: The Flame Burns On

The Economist – Xi Warns Against Western “Bullies”, To Argue For One-Party Rule

South China Morning Post – From Mao To Tiananmen, Hu Yaobang Is An Icon Of China’s Reform

The Independent – Tiananmen Square Massacre: Who Was The Tank Man And How Is He Being Remembered Today?

The Independent – At Least 10,000 People Died In Tiananmen Square Massacre

SUP China – Kuora: How many Chinese know about the â€˜June Fourth Incident’?

History Collection – 12 of the World’s Most Violent Student Riots