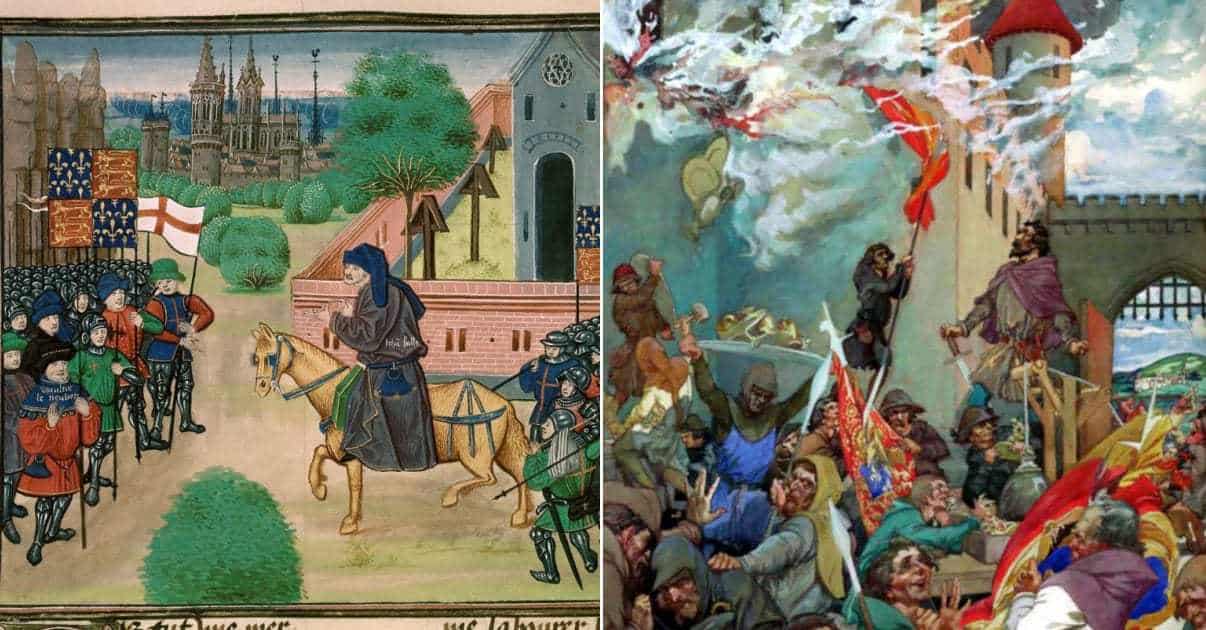 Late fourteenth century England was not a pleasant place to be. The Black Death had swept the nation a few decades before, changing the social dynamic of the country. England and France had been fighting in the Hundred Years’ War for the past fifty years, and the state was politically unstable. The boy king Richard II had inherited the throne from his grandfather, Edward III, and his despised royal councils had imposed a series of taxes that were particularly harsh on the lower classes to raise money for the war effort.

In June 1381, thousands of workers from Kent in southeast England marched on London to confront the government officials responsible for passing strict taxation and labor laws against them. Many Londoners had opposed the government for years, and the combination of Kentish and London agitators descended London into chaos: they attacked and burned buildings and homes, and they murdered government officials on sight, with the king and his advisors huddled in the Tower of London in fear for their lives. Known as the Peasants’ Revolt, it became England’s first great popular uprising: the revolution spread all over the country, and the government did not re-establish order until the end of the year.

The fourteenth-century economy depended on manorialism, an economic practice in which lower-class workers (serfs) lived on estates owned by wealthy, upper-class landholders; in exchange for living on the land and having a small amount of it to cultivate for themselves, the serfs had to provide labor for the estate. Serfs had varying degrees of mobility, but for the most part, they were permanently tied to the land, and they couldn’t leave without the permission of their lord. By the middle of the century, the Black Death arrived in England, killing about 50% of the population.

With the decrease in population, the lower-class workers realized that they were in demand, and they began to push for better working conditions and higher wages that the landowners did not want to provide. The royal government passed labor and tax laws that favored the landowners and began to limit the movement of the peasantry by fixing wages and fining serfs for breaking their contracts. The upper classes feared that the laborers that moved from place to place would incite other peasants to rebel. The government used conspiracy and treason laws to limit the travelers’ movements and influence, which increased the resentment.

In 1380, another law taxed each person at a flat-rate poll tax, which was more economically difficult on the lower classes than on the upper classes. Collecting these taxes was an issue because most of the people who were forced to pay them didn’t have it to give. The southeast of England was especially outraged, and many people in this area refused to register to pay the tax. Richard II’s royal advisors sent tax investigators around the country to find out who wasn’t paying the taxes, which further offended the people of southeast England.

In May 1381, much like the Jacquerie Revolt in France in 1358, the resentment against the labor restrictions and the tax laws used to raise funds for the war effort led to all-out rebellion. Most of the unrest began in southeast England, in Kent and Essex, two neighboring counties in southeast England, where incensed workers attacked tax collectors and their landowners, and they destroyed legal papers that documented their attachment to their lands.

The outrage against the tax and labor laws combined with the preacher John Ball’s sermons on the equality of all men as descendants of Adam and Eve increased the political consciousness among the peasants. They believed that they were equal to the upper classes, and they demanded equal treatment. By June 1381, the rebellion in Kent in southeastern England soon became organized under Wat Tyler, and they marched to Canterbury, where they executed anyone that was associated with the government and freed the prisoners from the jails.

Tyler then convinced a few thousand followers to march with him to London to demand a change in the taxation laws and the removal of the king’s officials who had passed them as well as an end to serfdom. Reaching Blackheath, to the southeast of London, the Bishop of Rochester met with the peasants to convince them to return home; it didn’t work, and Tyler and his men pressed into the city.

Already a hotbed of political resentment, many members of London’s upper class fought each other for influence. Members of the nobility resented the power of Richard II’s advisors, including the Lord Chancellor Simon Sudbury and the Lord High Treasurer Robert Hales. The royal council had established a new court that took power away from the local city officials. When Tyler and his men arrived, they found a large group of London citizens ready to join their cause.

By the middle of June, Tyler and his rebels arrived in London, descending the city into pure chaos: the combined forces of disgruntled Londoners and Wat Tyler’s followers killed anyone connected to the government, stormed the jails, and either set fire to or destroyed many homes and public buildings. Richard II, the teenaged king of England, had to flee to the safety of the Tower of London; most of his armed guards and military were fighting the war in France or stationed in the north to protect the country against an invasion from Scotland.

Unable to quell the violence, Richard II exited the Tower to negotiate with the peasants. They met at Mile End, where the king agreed to all of their demands. Richard II agreed to eliminate serfdom, stop the unfair taxation laws, and granted pardons to anyone involved in the uprising. Satisfied with the negotiations, some of the rebels returned home, but Wat Tyler and his followers remained, doubtful of the king’s sincerity.

The next day, June 14, 1381, Richard II met with Tyler and his men in Smithfield, London, and he continued to support the demands of the uprising. During the meeting, some of the rebels stormed the Tower of London, murdering the Lord Chancellor and the Lord High Treasurer, who were both still locked inside. Wat Tyler still wasn’t convinced the king would honor his promises, and there was an altercation in which William Walworth, the mayor of London, murdered Tyler.

The king was able to calm the rebels long enough to order Walworth to organize a force to take back control of London. As soon as he had control of the city, he went back on his word and reneged on his promises. The revolutionary fervor had spread throughout the country, and the king ordered almost 5,000 soldiers to restore peace in the country, which didn’t come until November 1381. By the time peace was restored, almost all of the leaders and about 1,500 of their followers were dead.

The Peasant’s Revolt is one of the most researched events of medieval England. The uprising led to the abolition of the poll tax, and it forced England to change its foreign policy. Without the option to raise enough taxes, the country couldn’t invest in military aggression against France and Scotland, as it had before. The memory of the uprising was fresh in the minds of landowners: they were more willing to negotiate with their workers for better conditions and better wages, some even giving their serfs the option to buy their freedom. By the end of the fifteenth century, the feudal system had become obsolete.

The Peasant’s Revolt is one of the most important events of medieval England because of its political and economic impact. With its combination of disorder, protest, and violence, many of the country’s top officials were killed, temporarily paralyzing the government and almost bringing it down altogether. Remnants of the rebellion, especially attacking unfair taxation, would be echoed in the beginnings of the American Revolution nearly four hundred years later. Although England’s first popular uprising was sparked by a combination of many different factors, at the heart of it was the belief that workers had the right to be paid a fair wage and that a flat tax was economically unjust to the lower classes. These are still arguments that we are having today.