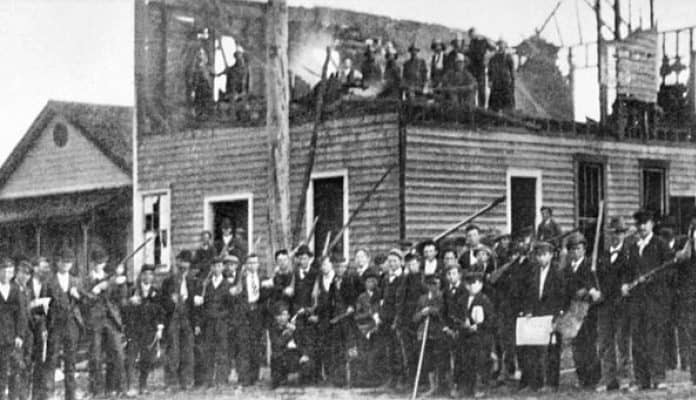 The open resistance of orders by an established authority, rebellions are an integral part of the American national story. Fashioned out of a successful revolt of its own making against Great Britain, perhaps due to this incendiary birth the United States of America retained a proclivity for rebellion. Although such intense passions for insurrection have dissipated in recent decades, the early history of the young American nation remains littered with incidents of popular rebellion that have, with the exception of the most extreme or impactful, been largely forgotten to history.

Here are 20 times Americans rebelled against their own government:

20. Initiating the United States’ protracted inclination towards rebellion, the American Revolution was a political dispute that later escalated into an armed conflict between the Thirteen Colonies and Great Britain

Typically regarded as beginning in 1765, triggered by the passage of the Stamp Act among other punitive pieces of legislation imposed upon the American Colonies by the Westminster Parliament, the American Revolution was a period of insurrection by the Thirteen Colonies against Great Britain. Prompting a rejection of British rule over the colonies in protest of the economic damage caused by the protectionist restrictions, so-called “patriots” argued that without representation in Parliament the legislation was unjust and invalid. Escalating into violence and sabotage with the Boston Massacre and Boston Tea Party in 1770 and 1773 respectively, by 1775 the political situation had evolved into open war.

Becoming the American Revolutionary War, also known as the American War of Independence, an attempt by British soldiers to seize militia supplies resulted in the Battles of Lexington and Concord. The “shot heard round the world”, “patriots” rallied to form Provincial Congresses to assume the powers of government and suppress “loyalists”. Constructing the Continental Army, led by George Washington, and forming a Continental Congress, the Thirteen Colonies publicly declared independence on July 4, 1776. After eight years, in 1783 the British and American governments signed the Treaty of Paris, ending hostilities and recognizing the formation of an independent American state.