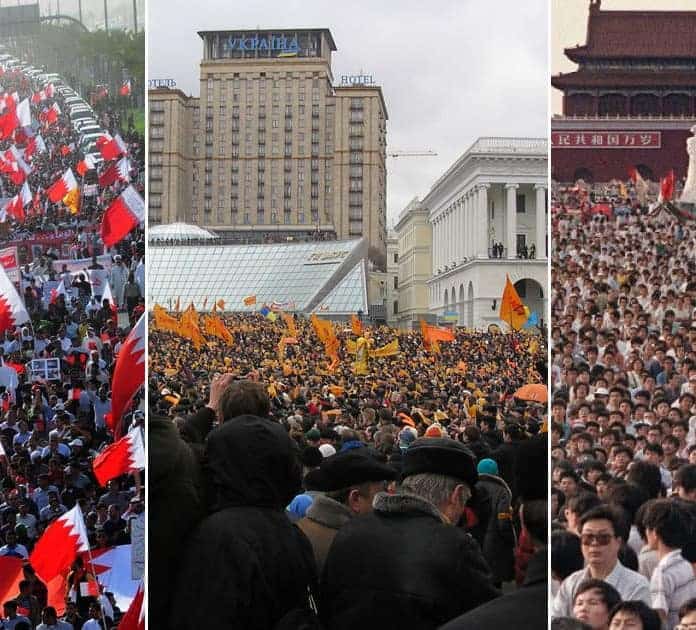 When people are angry, feel like they are being treated unfairly, are afraid of what the future holds for them, they may voice their opinion through protest. Some of these protests are peaceful, some end up disintegrating into violence. Most people believe that little can be accomplished through protests and yet time and time again tens of thousands of people will come together to try and get their voices heard. Here are some of the biggest political protests in modern history and what they accomplished, if anything.

In 1930, India was still under British rule and at the time there were many who were against the British and sought peaceful ways of protest. Mohandas Karamachand Gandhi preached of civil disobedience – a way of acting out against the British colonizers in non-violent ways. In March of 1930 Gandhi decided to stand up to the British colonizers by acting out against the salt tax. At the time the British were taxing salt production. Many people in the village of Dandi would make their living by producing salt from seawater, a process that became illegal after the introduction of the tax on salt production. The British would often use force to stop the populace from creating salt from the sea water.

So, on March 12, 1930 Gandhi and 78 others decided to 240 miles to the village of Dandi from Sabarmati Ashram. Gandhi and his followers planned to make the 24-day trek to the village solely to produce salt from sea water in an act of nonviolent civil disobedience. As Ghandi marched more and more people joined along the way. He would stop in villages and convince local leaders to abandon their positions and rise up against their colonizers. On April 6, at 6:30 am he broke the salt laws and produced salt from the seawater. That simple act caused millions more Indians to follow suit and commit their own acts of civil disobedience.

Ghandi and over 80,000 other protesters were arrested in response to the civil disobedience and protests. The movement continued for a year and drew worldwide attention to the plight of Indians under colonial rule. A year after the protest began, Ghandi was released from prison and given a spot at the Second-Round Table Conference.

While the movement did little for the independence movement or the rights of Indians, it did prove to the British that they remained in control of India only as long as the Indians allowed it.