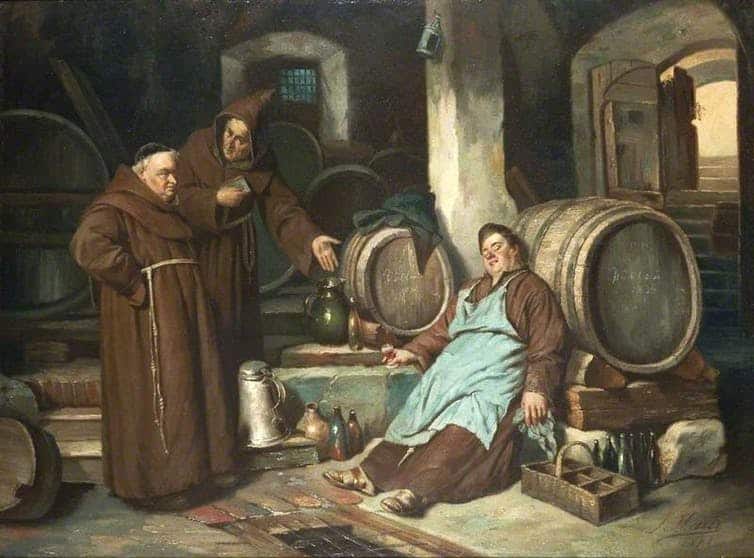 Edmund Ironside (circa 993 – 1016) earned the “Ironside” for his staunch resistance to a Danish invasion by king Canute. Edmund’s father, Ethelred the Unready, had unwisely sought to buy off the Danes then occupying northern England, and stop their incessant raids into his kingdom, by paying them a tribute known as the Danegeld, or “Danish gold”. Unsurprisingly, that only emboldened the Danes, who upped their demands for more and more gold. Fearing little from Ethelred, the pocketed the tribute, and kept raiding his domain. Finally, after bankrupting his kingdom and beggaring its people with the high taxes necessary to pay the Danegeld, Ethelred ordered a massacre of Danish settlers in 1002. The massacre led to an invasion by the Danish king Sweyn Forkbeard, who conquered England in 1013 and forced Ethelred to flee to Normandy.

However, Sweyn died the following year, at which point Ethelred returned, and with his son Edmund playing a leading role, chased Sweyn’s son, Canute, out of England in 1014. Canute returned the following year at the head of a large Danish army which pillaged much of England, but crown prince Edmund mounted a fierce resistance which stymied the Danes. When Ethelred died in 1016, Edmund succeeded him on the English throne. On November 30th, Edmund went to the privy to answer a call of nature, but unbeknownst to him, an assassin was waiting in the cesspit for the royal posterior to show up. When Edmund sat down to do his business, the assassin stabbed upwards with a sharp dagger, and leaving the weapon embedded in the king’s bowels, made his escape. Unfortunately for Edmund, even if his sides had been made of iron, his bottom was not.

5. The Lioness of Brittany Preyed Upon the French

Jeanne de Clisson (1300 – 1359), also known as the “Lioness of Brittany”, terrorized the French early in the Hundred Years War. After the French accused her husband of treason and executed him, de Clisson went on the warpath. She hired herself out to the English and turned pirate, preying upon French shipping in the English Channel, torturing and executing every French nobleman she came across. De Clisson was a Breton noblewoman from a prominent family. After two marriages, one which ended with her husband’s death and the other with an annulment, she married a wealthy Breton named Olivier Clisson in 1330. In 1342, Clisson was military commander of a town that was captured by the English, and he was taken prisoner. He was released soon thereafter in a prisoner exchange – the only Frenchman to be freed.

Between that and an unusually low ransom requested by the English, Clisson was accused of treason. He was tried and convicted by a court of French nobles, and beheaded in 1343. Jeanne de Clisson took her young sons to see their father’s head mounted on a spike, and vowed revenge. She sold her estates, and used the proceeds to raise a private force with which she began attacking the French. They did not take her seriously at first. Then she attacked and captured a French castle, and massacred its entire garrison, except for one man whom she let live to tell the tale. She was taken seriously from then on.

A determined French counterattack forced Jeanne de Clisson to flee to England, where she accepted English backing to continue her war as a mercenary. She bought and outfitted three warships, and as a signal of her intent, painted them black and dyed their sails red. Then she led her black fleet into the English Channel, to fall upon French shipping. De Clisson soon gained a reputation for savagery, massacring nearly all who fell into her hands. French aristocrats in particular were in for a rough time if they were found aboard any ship captured by the mercenary pirate.

There was good money to be made ransoming her captives, as was custom of the day, but de Clisson wanted their lives, not their money. So she tortured her aristocratic captives, then personally beheaded them with an ax, before tossing their corpses overboard. De Clisson continued her murderous rampage against the French wherever she could find them, for thirteen years, before her blood lust was finally sated. Eventually, in 1356, she gave up the life of a mercenary pirate, and retired to her estates in Brittany. She remarried for a fourth time, and settled into a castle on Brittany’s southern coast, where she died peacefully in 1359.

Tamerlane was born in Uzbekistan. His rise began in 1360, when he led tribesmen on behalf of the region’s ruling Khan. However, the Khan was murdered, triggering a power struggle. It ended with Tamerlane as the power behind a throne occupied by a figurehead puppet, through whom Tamerlane ruled. He claimed descent from Genghis Khan, which was dubious, but he justified his conquests as a restoration of the Mongol Empire and re-imposition of legitimate Mongol rule over lands seized by usurpers. Tamerlane then spent 35 years earning a reputation for savagery, while bringing fire and sword to the lands between the Indus and the Volga, the Himalayas and the Mediterranean. He wrecked Damascus and Aleppo in Syria; Baghdad in Iraq; Sarai, capital of the Golden Horde, and Ryazan, both in Russia; India’s Delhi, outside whose walls he massacred over 100,000 captives; and Isfahan in Iran, where he massacred 200,000.

Tamerlane was also in the habit of piling up pyramids of severed heads, cementing live prisoners into the walls of captured cities, and erecting towers of his victims’ skulls as object lessons and to terrorize and edify. Tamerlane is estimated to have killed about 17 million people, amounting to 5 percent of the world’s population at the time. Extrapolated to current global population of 7.7 billion, Tamerlane’s rampage would be the equivalent of killing 385 million people today. His decades-long warpath finally came to an end in 1405 as he was preparing to invade China, but he took ill while encamped, and died before launching the campaign. He would prove to be history’s last major Steppe conqueror, and the bloodiest of the lot.

2. Charlemagne Liked Sexing His Live Sister and His Dead Wife

Charlemagne was one of medieval Europe’s greatest figures, who unified much of western and central Europe into what became known as the Carolingian Empire. In 800, he was crowned by Pope Leo III as “Emperor of the Romans” – the first in a line of Holy Roman Emperors that would last until 1806. Charlemagne was also a weirdo, who was into incest and necrophilia. He had an incestuous relationship with his sister Gillen, and fathered upon her a son/ nephew, named Roland.

Sleeping with his sister was not the worst of it: Charlemagne also reportedly had a thing for sleeping with corpses. A variety of texts from the ninth century refer to Charlemagne repeatedly engaging in, but refusing for a long time to confess to, some “unspeakable sin”. He eventually got it off his chest, and sought absolution for what some modern scholars think was a predilection for necrophilia. That gave rise to legends in which Charlemagne’s partiality to corpses extended from sexually satisfying his lusts with random corpses, to sleeping with his wife’s corpse after her death.

1. The Medieval Cult That Sacked the Kaaba

Ninth century Arabia saw the emergence of the Qarmatians, who started off as bandits preying upon caravans. Then they got religion, after they came upon and fell under the sway of a mystic who preached that the End Times were nigh. The Qarmatians morphed into a heretical millenarian cult, and captured eastern Arabia and Bahrain, where they founded a utopian religious republic in 899. Believing that pilgrimage to Mecca, a pillar of Islam, was a superstition, the Qarmatians attacked pilgrim caravans, and in 906, massacred over 20,000 Muslim pilgrims. In 930, as part of their millenarian quest to speed up the End Days, they seized Mecca and Medina, Islam’s holiest cities, and sacked both.

Weatherford, Jack – Genghis Khan and the Making of the Modern World (2005)