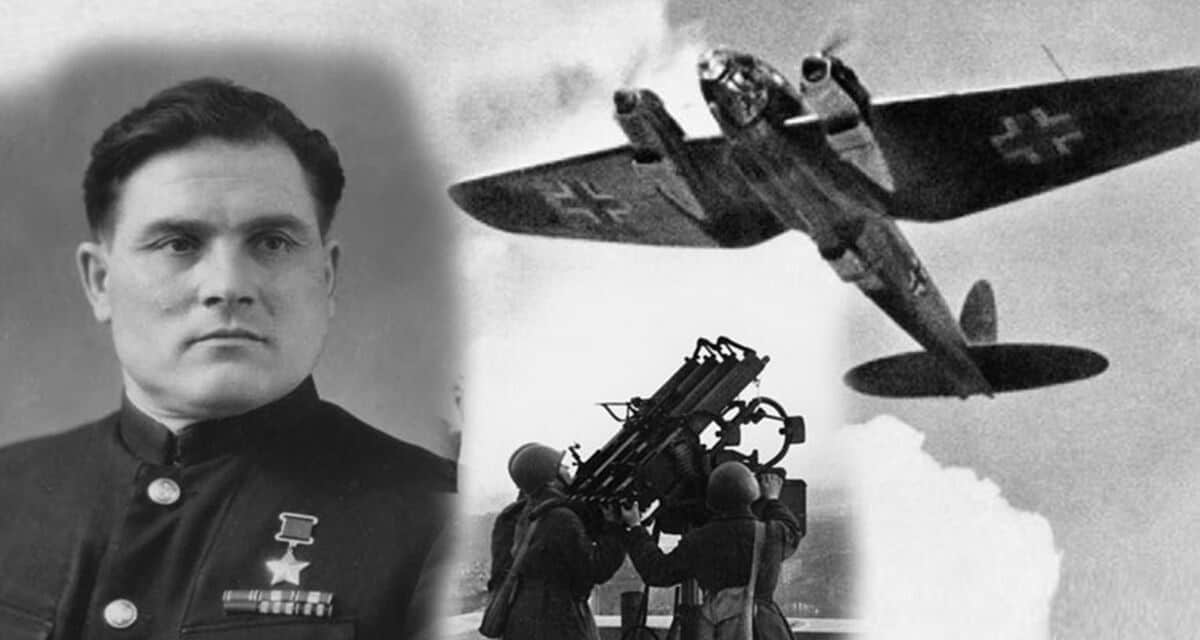 10. The Other Allied Pilot Who Managed to Escape in a Stolen Nazi Airplane

The Second World War had no shortage of extraordinary deeds by heroic figures, and Mikhail Devyataev, above, was not the only Allied pilot who managed to escape the Nazis in a plane stolen from under their noses. Another intrepid pilot who matched Devyataev’s feat was US Army Air Forces Second Lieutenant Bruce Ward Carr (1924 – 1998). Like the Red Air Force flyer, Carr also boosted a German plane – in his case a fighter, rather than a bomber – and flew it to the safety of Allied lines.

Carr ended WWII as a fighter ace with fourteen confirmed victories and a Distinguished Service Cross. He also ended the war as the only USAAF pilot to have left on a combat mission in an American plane, and returned to base in a German one. It happened in November, 1944, when Carr flew a strafing mission in P-51 fighter, but was shot down over enemy territory. As seen below, he evaded capture, then made his escape in a Focke-Wulf Fw 190 fighter that he stole from a German airfield and flew back home.

Bruce Carr began to fly in 1939, when he was just fifteen-years-old. In 1942, at age eighteen, he joined the USAAF’s Flying Cadet Training Program. He had the good fortune to get assigned to the same flight instructor who had taught him how to fly in 1939. Carr’s prior experience in the cockpit got him sent to Spence Airfield in Georgia, for an accelerated pilot training program in P-40 Warhawk fighters. After 240 hours in the air, he graduated as a flight officer in late August, 1943, and was sent for more advanced instruction.

After he graduated from Spence Airfield, Carr spent an additional two months on qualification for the early models of the North American P-51 Mustang fighter, and its ground attack and dive-bombing variant, the A-36 Apache. He was sent to England in early 1944, and was assigned to the 380th Fighter Squadron, 363rd Fighter Group, Ninth Air Force. Until then, Carr had never flown above 10,000 feet. When he took his P-51 to 30,000 feet, he was so impressed by its handling that he named his airplane “Angel’s Playmate“.

8. This Pilot’s Superiors Alleged That he Was Too Aggressive

Bruce Carr notched his squadron’s first kill on March 8, 1944, when he pursued a Messerschmitt Bf 109 near Berlin, and chased it to near-ground-level with his guns blazing. Only a single bullet hit the enemy fighter, but its pilot panicked. Unable to escape in his Bf 109 from Carr’s P-51, the Luftwaffe airman figured that ought to abandon his plane and parachute to the ground. Unfortunately for the German, he jumped too close to the ground for his parachute to fully open.

Unfortunately for Carr, higher ups declined to give him credit for the downed enemy fighter, on grounds that it had crashed, rather than been shot down. He argued that it was his close pursuit and aggressive flying that had caused the crash. As Carr saw it, he had literally scared the enemy pilot to death, and made him kill himself. Carr was not only denied credit for his first kill, his style of flying got him labeled as “overaggressive” by his superiors. His days in the 380th Squadron, 363rd Fighter Group, were numbered.

7. A Transfer to a New Unit Was Just What This Fighter Ace Needed

As Bruce Carr‘s relationship with his superiors began to grow toxic, it was decided that it might be better for all involved if he served in a different unit. So he was transferred to the 353rd Squadron, 354th Fighter Group. It was his old squadron’s and fighter group’s loss. Carr became one of the 354th Fighter Group’s top aces, and it began on June 14, 1944, when he was credited with a probable kill of a Messerschmitt Bf 109 over Normandy, France. Three days later, on the 17th, he shared a kill when he helped another pilot down an Fw 190 fighter. That August, Carr was commissioned a second lieutenant.

On September 12th, 1944, Second Lieutenant Carr’s squadron strafed Ju-88 bombers on a German airfield. On the way back, his flight spotted more than 30 Fw 190s two thousand feet below them. The Americans pounced, and in display of exceptional airmanship, Carr personally shot down three enemy fighters in just a few minutes – an aerial hat trick. He then escorted a fellow American pilot, whose airplane was badly damaged, back to base. His exploits that day earned Carr a Silver Star, America’s third-highest decoration for valor in combat.

6. Shot Down Deep Inside the Third Reich

Bruce Carr became a fighter ace on October 29, 1944, when he shot down two more Bf 109s over Germany, to reach five total kills. Four days later, as he led a flight of P-51s on a strafing run over a German airfield in Czechoslovakia, Carr’s Mustang, Angel’s Playmate, was hit by antiaircraft fire. He bailed out from his fatally damaged plane, and parachuted safely to earth. Carr had managed to escape death in the air. Now he set out to escape Germans on the ground.

Stranded deep in enemy territory, hundreds of miles from friendly lines, Carr managed evaded capture for several days. Eventually, cold, wet, exhausted, and famished, he reached the end of his tether and decided to surrender. Aware that German airmen treated enemy airmen better than other POWs, Carr headed to a Luftwaffe airfield that he had spotted. He made it to its fence, and decided to hide in adjacent woods that night, and walk up to the front gate and surrender the next day.

5. A Spur of the Moment Escape Plan

As he hunkered down outside a German airfield’s fence, Bruce Carr saw something that made him rethink his decision to surrender. Just a few yards away, Luftwaffe ground-crew were fueling and performing maintenance on an Fw 190 fighter near the runway’s edge, not far from where Carr lay hidden. When they were done, the Germans tightened the panels back on the plane and departed, leaving it ready for combat the following morning. An escape plan began to form in Carr’s mind – but it required extraordinary courage to pull off. That night, he worked up the nerve to sneak up to the enemy fighter, and climbed into its cockpit.321

Next, Carr had to fight off sleep until dawn’s early light allowed him to inspect the instruments. Everything in the cockpit was labeled in German, but there were enough similarities between it and American cockpits for Carr to guesstimate what did what. He found the Fw190’s starter lever, spent half an hour to build up his courage, then pulled it. Nothing happened. German starters worked the other way around. He eventually worked out that he needed to push it forward, and the fighter’s BMW motor roared to life.

4. A Dramatic Escape Worthy of an Action Adventure Film

With the Fw 190’s engine turned on, Bruce Carr decided that he would not risk his escape with an attempt to taxi to and line up on the runway. He poured on full throttle, raced across a corner of the airfield, slalomed between two airplane hangars, then took off over the heads of the sleepy and befuddled Germans below. When he reached Allied territory, ground troops opened up with flak on his Fw 190. To avoid friendly fire, he flew just above treetop at 350 mph.

After 200 miles, he reached his airfield. Unable to deploy the landing gear, or communicate via radio, Carr decided to make a belly landing before his escape was ruined by his own airfield’s defenses blasting him out of the sky. Military police surrounded the crashed Fw 190, and refused to accept Carr’s word that he was an American airman. It was finally sorted out when the group commander arrived, and identified his missing pilot. Carr is the only Allied pilot to fly off on a mission in a P-51, and return to base in an Fw 190.

3. An Intrepid Escape Was Not the End of This Ace’s Heroics

Bruce Carr’s extraordinary escape earned him a well-earned promotion to first lieutenant, as well as a well-deserved leave. However, his wartime exploits were not over. On April 2, 1945, First Lieutenant Carr led three other American fighters on a reconnaissance mission, when they spotted 60 Luftwaffe fighters above them. He was game to have a go at the enemy despite the 15:1 odds against his flight, and immediately led an attack. Within minutes, he and his companions had downed 15 Germans. Carr personally downed two Fw 190s, three Bf 109s, and damaged a sixth enemy fighter.

That made Carr the European theater’s last ace-in-a-day (somebody who shot down five or more enemy planes in a day). It also earned him a Distinguished Service Cross, the country’s second highest award for valor. By war’s end, Carr had flown 172 combat missions, scored 15 confirmed air-to-air kills, several more unconfirmed victories, and numerous ground kills. He flew another 57 combat missions during the Korean War, and 286 more in Vietnam, and in the process earned a Legion of Merit and Three Distinguished Flying Crosses. He retired from the Air Force as a colonel in 1973, and succumbed to prostate cancer in 1998. He is buried in Arlington National Cemetery.

It happened in January, 1942, when an Ilyushin Il-4 bomber in which Lieutenant Colonel Chisov served as a navigator was jumped by Luftwaffe fighters. The bomber was wrecked and spun out of control, so Chisov exited at a height of 23,000 feet. He had a parachute, but he was worried that if the nearby German fighters spotted him as he drifted slowly to the ground beneath its open canvas, they would pounce upon and shoot him. Neither side paid much attention to chivalry on the Eastern Front.

Because he feared that might get shot by German fighters while he dangled defenseless beneath a parachute, Ivan Chisov decided that he would not open his parachute until he got close to the ground. However, lack of oxygen in the thin air so high up caused him to black out. Unconscious, he continued all the way down without deploying his parachute. As a result, he plummeted 23,000 feet from his stricken Il-4, before he hit the ground at an estimated speed of 118 to 150 miles per hour.

Luckily, for the Soviet airman, he hit the edge of a snowy ravine, and the snow absorbed and dissipated enough impact energy to keep him alive. Chisov bounced from the ravine’s edge and slid, rolled, and ploughed his way to the bottom. He was seriously hurt, and suffered spinal injuries and a broken pelvis. However, he had managed to escape the Grip Reaper, and was alive. He underwent surgery, and spent a month hospitalized in critical care. He was a tough Russian, however, and three months after his dramatic fall, Chisov was back in the air, flying more missions against the Nazis.

History Collection – 16 Steps These Criminals Took to Escape From Alcatraz

National Park Service – The Soldier Who Did Not Surrender

Rogozinski, Jan – Honor Among Thieves: Captain Kidd, Henry Every, and the Pirate Democracy in the Indian Ocean (2000)

Russo, Gus – The Outfit: The Role of Chicago’s Underworld in the Shaping of Modern America (2003)