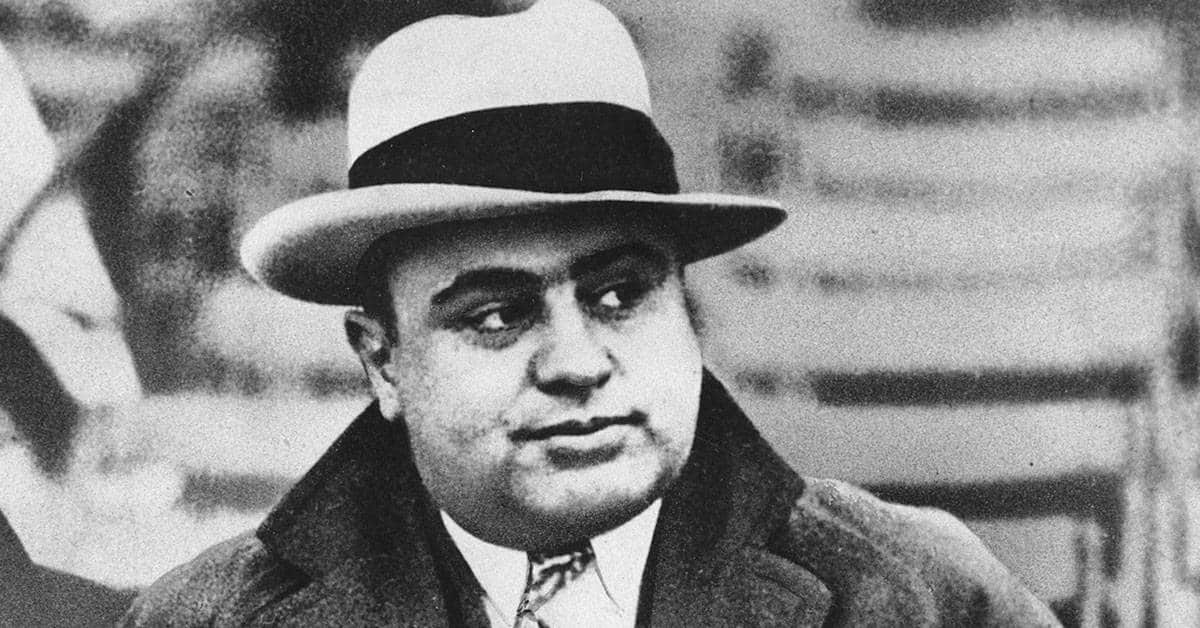 In 1919, the 18th Amendment to the US Constitution was ratified, effectively making alcoholic beverages illegal across the country. But people still wanted to drink; making booze illegal didn’t change that. It just meant that now the only people supplying that booze were criminals. And few criminals in the liquor trade were as violent or as seemingly impervious to being caught as Al “Scarface” Capone. But while the law might have seemed powerless to punish Capone, Capone believed that the vengeful ghost of one of his victims stepped in to do it for them.

To understand why he believed that, you need to understand who Capone was. Capone was born to Italian immigrants in New York City and spent most of his early life getting into trouble. After getting kicked out of school at age 14 for punching a teacher in the face, he caught the interest of a prominent mobster, Johnny Torrio. Torrio soon left for Chicago to run a brothel operation for a crime boss named “Big Jim” Colosimo. But in 1917, he set Capone up with a job as a bartender in New York club owned by his friend, Frankie Yale. As usual, Capone found it difficult to stay out of trouble.

One night, while serving as a bouncer at the club, Capone insulted the sister of a man named Frank Galluccio. In response, Galluccio slashed Capone across the face, leaving a set of prominent scars. Capone’s associates soon took to calling him “Scarface,” a name Capone himself hated- he would later tell people the scars were old war wounds. Soon after, Frankie Yale called Torrio tell inform him that Capone had nearly beaten a rival gang member to death and that the police were now looking for a suspect with a prominent scar.

Torrio agreed the best thing to do was to send Capone west while the heat died down, and Capone soon turned up in Chicago to take up work as a bouncer at one of Torrio’s brothels. Around that time, Prohibition went into effect, and the Chicago underworld quickly realized there was a fortune to be made in bootlegging liquor to supply the city’s speakeasies. Torrio encouraged his boss, “Big Jim” Colosimo, to enter the racket. Colosimo refused, worried that the already-violent bootlegging trade would draw too much heat from the police. Torrio didn’t take the refusal lightly. Instead, he placed a call to his old friend Frankie Yale.

Torrio decided that Colosimo stood in the way of his profit and asked Yale if he was willing to kill him. When Yale arrived in Chicago, he settled on the violent young Capone as the perfect accomplice. In May 1920, Torrio called Colosimo to tell him that he needed to be at a cafe he owned to receive a shipment. When Colosimo arrived, he was brutally gunned down in the foyer. No one was ever charged with the murder, but Yale and Capone were almost certainly involved. And though it might have been the first murder Capone helped commit, it wouldn’t be the last.

With Colosimo dead, Torrio began moving into the bootlegging business and promoted Capone to be his right-hand man. Together, the two set to work cornering the market on illegal booze in the city. Thier efforts put them at odds with the rival North Side gang headed by Irish gangster Dean O’Banion, which was heavily involved in the bootlegging racket. Soon, the competition led to war. In 1924, O’Banion was murdered, likely by Frankie Yale. In revenge, a group of North Side gunmen attacked Capone, but he escaped unharmed. Torrio wouldn’t be so lucky. Two weeks later, he was ambushed and shot several times.

Torrio survived his injuries, but the attack left him shaken. Once out of the hospital, he left for Italy, leaving Capone in charge of the Chicago operation. Torrio always preferred to stay out of the spotlight, conducting his gang’s illegal activities in the shadows. Capone shared little of his mentor’s subtlety. Once in control, Capone began cultivating an image as a celebrity. His organization was bringing in millions through the bootlegging trade and Capone spent it on flashy suits and jewelry. He made no effort to avoid the press, instead giving reporters veiled references to his work as a “businessman” who was “giving people what they want.”

Capone became a prominent figure in the debate on Prohibition. To many, he was a simple thug. However, others believed he was taking a stand against an unjust law. But what many of his supporters neglected to mention was that all of Capone’s operations were supported by extreme violence. Capone regularly orchestrated bombing campaigns and assassinations against anyone who threatened his control over the booze supply in Chicago. And soon, his ongoing war with the North Side gang would result in a horrific massacre that even Capone’s staunchest supporters couldn’t ignore.

On February 14, 1929, five members of the North Side gang and two of their associates were stopped by men wearing police uniforms in the Lincoln Park neighborhood of Chicago. The men were led to a nearby garage, where they were lined up against a wall and brutally gunned down. The press soon dubbed the event the “St. Valentine’s Day Massacre.” There was no hard evidence in the case to go on. The one victim still alive when the real police showed up stuck by the gangster code of silence and stated, “no one-shot me,” before dying of multiple bullet wounds. However, suspicion immediately fell on Capone.

The public soon began clamoring for justice against the city’s most notorious gangster. But protected by a web of corruption and bribes, Capone was able to avoid any charges of murder or violating Prohibition. Instead, the government focused on a lesser charge. And in 1932, Capone was finally sent to prison for failure to pay income tax. Many people saw this as another instance of Capone escaping justice for his murders. But once in prison, he suffered through his own form of punishment as he began receiving visits from the ghostly shade of one of his victims and slowly descending into madness.

By the time he ended up in a Georgia penitentiary, Capone’s health was in serious decline. Long-term abuse of cocaine meant that he had a perforated septum and struggled with the symptoms of withdrawal. More importantly, he was suffering from the effects of advanced syphilis, a sexually transmitted disease he picked up while running one of Torrio’s brothels and never got treatment for. His poor health made him an easy target for other prisoners, and his cellmate worried that Capone was on the verge of a nervous breakdown.

Tensions with the other prisoners and concerns that Capone was getting special treatment by bribing his guards led to Capone being transferred to Alcatraz, a prison island in San Francisco Bay. At Alcatraz, Capone had his own separate cell. But he was convinced that he wasn’t alone. From the first time that Capone was imprisoned, other prisoners would sometimes hear him screaming at someone named “Jimmy.” This continued in Alcatraz when observers often heard his wailing cries demanding that Jimmy leave him alone or sometimes even just having quiet conversations with him. The problem was, no one but Capone could actually see Jimmy.

According to Capone, that’s because Jimmy was a ghost. Specifically, he was the ghost of Jimmy Clark, a minor gangster who was killed in the St. Valentine’s Day Massacre. In Alcatraz, Jimmy’s visits from beyond the grave became more frequent as Capone slowly slid into insanity. He would spend long hours alone in his cell plucking at a banjo or babbling to himself. Eventually, even the operators of America’s toughest prison decided that there was no point keeping Capone in captivity. He was no longer the fearsome crime kingpin he used to be; he was simply a broken-down shell.

If you’re a more skeptically-minded person, you’re probably thinking that there must be a less supernatural explanation for Capone’s ghostly visitor, and there is. By the time Capone got treatment for syphilis, it had already progressed to the final stage, where it begins attacking the brain. Over time, this neurosyphilis destroys brain cells and can lead to hallucinations and insanity. The damage to Capone’s brain is the most likely explanation for why he thought he was being haunted by a ghost. Ironically, it was also the thing that ultimately prevented him from dying in prison.

Capone was paroled in 1939 and sent for medical treatment in Baltimore before retiring to his mansion in Palm Island, Florida. There his mental deterioration continued. In 1946, a psychiatrist examining Capone determined that his remaining mental capacity was equivalent to that of a twelve-year-old. All the while, he continued to be haunted by the vengeful spirit of Jimmy Clark. In 1947, Capone died of a heart attack. He was 48. For many, the idea that the ghost of one of his victims hounded Capone into insanity and an early grave provides a comforting sense of justice. Even if it was probably just in his head.