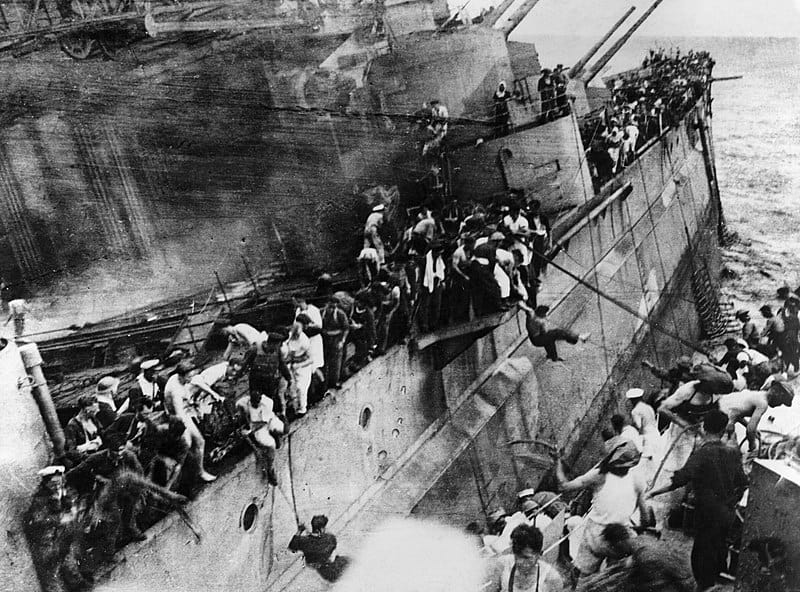 The Reality of Living through Pearl Harbor

USS Arizona was responsible for almost half of all American fatalities

The explosion of USS Arizona, which destroyed the entire forward section of the ship, remains a subject of debate eighty years later. One theory is that the fatal bomb, which struck the ship at 8.06, detonated in an area where black powder, used to fire ceremonial salutes, was improperly stored. Another theory suggests the bomb penetrated the armored deck, detonating in the forward magazine. The massive explosion followed the bomb strike by just under 7 seconds, so either theory is possible, but it’s really quibbling over details. The forward magazines exploded, regardless of what the final trigger was, and the result was 1,177 men killed, most of them instantly. More than two-thirds of Arizona’s crew died in the explosion and its immediate aftermath, among them Captain Franklin Van Valkenburgh and Rear Admiral Isaac Kidd. About half of the deaths during the Pearl Harbor attack occurred aboard Arizona.

Arizona’s destruction triggered fires which spread to the oil covering much of the area around Battleship Row and contributed to the loss of at least one more American battleship. USS California, moored alone at the far end of the row, received two bomb hits, and at least two torpedo hits of its own. Its crew lost electrical power temporarily but were in the process of restoring it when burning oil drifted down on the stricken ship. California abandoned ship, but by late morning its crew came back aboard. Attempts to counterflood to control the list on the ship, as well as pumping out the ship, remained hampered by the lack of electrical power. California gradually settled to the harbor mud, its main deck partially awash. Like the other battleships lost that day, other than Oklahoma and Arizona, California was eventually raised, rebuilt, and returned to service.

Within a span of less than eight hours following the Japanese strike at Pearl Harbor, American, British, and Dutch possessions in the Pacific also came under attack. In all cases, they struck enemy airfields and, where relevant, Naval installations. American bases in the Philippines, Guam, and Wake Island were assaulted almost simultaneously. All received severe damage and casualties. British installations in Malaya and Singapore, the latter called by Churchill the bastion of the Empire, came under attack. Even before the American Congress heard FDR’s request for a declaration of war against Japan, the British Empire had declared war. Churchill himself directed a British task group, consisting of HMS Prince of Wales and HMS Repulse, to support the defense of Malaya. Both were sunk by Japanese air attack on December 10.

By that time there were already calls across the United States for an investigation into what happened at Pearl Harbor, as well as open accusations of Roosevelt having foreknowledge of the attack. One area of focus among those who believe FDR knew of the impending attack was the absence of the American aircraft carriers from Pearl Harbor. The theory suggests FDR had the Navy remove the carriers to protect them from harm, and ignores naval doctrine of the day. In December 1941, aircraft carriers were not considered capital ships by navies which adopted the Mahan Doctrine (including Great Britain, the United States, and Japan). Battleships and heavy cruisers comprised capital ships, carriers were considered part of the fleet’s scouting forces. The Pearl Harbor debacle led the world’s fleets to reconsider the value of aircraft carriers.

American carriers were absent to prevent them from being attacked

American carriers were absent to prevent they are being attacked, The United States had three aircraft carriers in the Pacific in December 1941. USS Saratoga was in a scheduled refit in Puget Sound. Lexington and Enterprise were both returning from missions during which they reinforced Marine aviation groups, the former at Midway, the latter at Wake Island. Had Enterprise been on schedule, the carrier would have entered port on December 6, after dispatching its air groups to the Naval Air Stations at Pearl Harbor. Heavy weather encountered during its return from Wake Island delayed its arrival by about 24 hours. During the attack, Enterprise was about 200 miles from Pearl Harbor, and planes from its air groups arrived over Hawaii as the attack was underway. Additional aircraft arrived following the Japanese raid and were subjected to friendly fire by the understandably jittery gun crews on the island.

The fact is, the battleships of the US Pacific Fleet were considered by the Navy at the time as the most valuable asset present at Pearl Harbor. Although the United States had other battleships which could be transferred to the Pacific, including Colorado, Idaho, New Mexico, New York, and Mississippi among others, it could ill afford the loss of the ships destroyed on December 7. It was from the Japanese the United States, and Great Britain, learned the value of aircraft carriers massed together as an offensive weapon at sea. With a couple of notable exceptions, the battleship was relegated to task force defense and shore bombardment following the attack on Pearl Harbor. The majority of the surface engagements which occurred in the Pacific during the war involved cruisers and destroyers. Fleet actions involved aircraft carriers, usually well out of sight of each other.

Following the war, the attack on Pearl Harbor, an assault by a belligerent against a neutral nation, was designated a war crime. A total of 2,403 Americans were killed in the surprise attack, the first of over 100,000 who lost their lives during the Pacific War. During the Tokyo War Crimes Trials, Japanese Prime Minister Hideki Tojo, Navy Minister Shigetaro Shimada, Foreign Minister Shigenori Togo, and Osami Nagano, Chief of the Naval Staff, were charged with and convicted of war crimes involving the Pearl Harbor attack. Yamamoto, who planned the attack, and Nagumo, who commanded the task force which accomplished it, were both dead by then. Conspiracy theorists and revisionists believe FDR should have been charged as well, though the evidence he was aware of the pending attack and deliberately covered it up does not, for the most part, stand up to close examination.

By the late 1990s, the stirring World War II call to “Remember Pearl Harbor” had faded from memory. The attack is barely mentioned in American schools and history textbooks in the 21st century. The grandchildren of Americans who huddled by their radios on December 7, 1941, are largely unaware of the date’s significance. In Japan, schools teach it as just one event in the long war to protect Asia from European colonialization and exploitation, which began in 1931 and continued until the atomic bombing of Japan in 1945. USS Arizona remains where it sank, stripped of all salvageable parts, part of the Pearl Harbor National Memorial. Eighty years after its destruction the hull still seeps fuel oil, a few drops at a time which rise to the surface above, easily seen by those who visit the remains of the ship.

“The Impossible Task of Remembering the Nanking Massacre”. Simon Han, The Atlantic. December 17, 2017.