20 Photos of the Construction of the Panama Canal 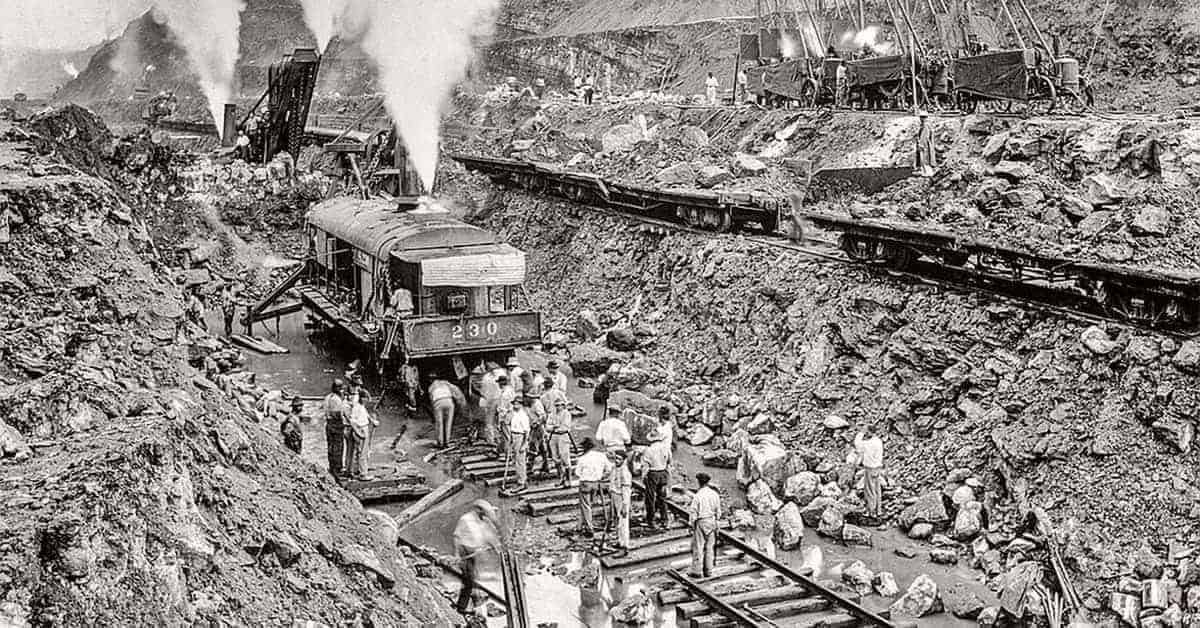 20 Photos of the Construction of the Panama Canal

The Panama Canal is 48 miles long, artificial waterway that connects the Atlantic Ocean with the Pacific Ocean. The canal greatly reduced the time it takes ships to go between the two oceans by enabling them to avoid the long, dangerous route around Cape Horn. The canal has locks at each end in order to lift ships up to the Gatun Lake, an artificial lake created to reduce the requisite excavation work the canal would have required. The canal is 85 feet above sea level, and originally was 110 feet wide (they were widened by a third in 2007 and the project was finished in May, 2016).

France began work on the Panama Canal in 1881, and the idea was inspired by the diplomat Ferdinand de Lesseps, who constructed the Suez Canal. Lesseps wanted a sea-level canal. His planning did not take into account the wet season and the Chagres River rising 35 feet, the dense jungle, the snakes, spiders, insects, yellow fever and malaria which killed thousands of workers. By 1884, the death rate was over 200 per month. Eventually, the project went bankrupt in 1889 after spending $287 million and losing 22,000 workers. In the ensuing scandal known in France as the Panama Affair, Lesseps and his two sons, among other stakeholders including Gustave Eiffel, were charged with misappropriation of funds and sentenced to five years imprisonment (Lesseps, 88 at the time, did not serve any prison time).

In June 1902, the U.S. Senate voted in favor of purchasing the contracting rights for the Panama Canal for $40 million. The Hay-Herran Treaty, which granted the United States a renewable lease from Colombia on the land proposed for the canal, was signed and ratified by the United States but the Colombians wouldn’t sign. The French manager of the New Panama Canal Company, Phillipe Bunau-Varilla, told Roosevelt that a Panamanian revolution was imminent. If America backed the rebels and recognized Panama as a sovereign state, the Panamanian government would sign. On November 3, 1903, with America’s help, Panama declared independence.

In 1904, the United States purchased the French equipment and excavations for $40 million, $30 million of which was related to the completed excavations at $1 per cubic yard. In 1905 a US engineering panel recommend the U.S. abandon the sea-level plan and pursue a lock system to raise and lower ships. The excavations of the locks required moving more than 170 million cubic yards of material in addition to what the French had completed. The construction of the canal was completed in 1904 costing the United States $375 million ($9.2 billion). The American and West-Indian death toll during American construction is officially 5,609 lives bringing the total deaths during the project to 27,609 people.

In 1977, Jimmy Carter oversaw the Torrijos-Carter Treaty which provided for relinquishing the Canal to Panama. On December 31, 1999, Panama assumed command of the waterway and the canal continues to be a chief source or revenue for Panama.

Interesting Engineering – The Panama Canal: A Story of Blood, Sweat and Rebellion