This Day in History: Pearl Harbor Is Bombed (1941) 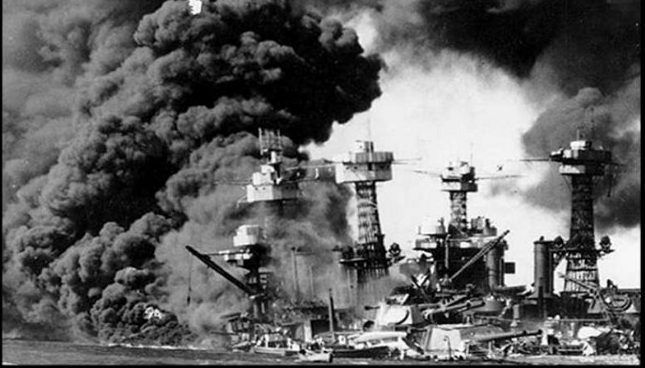 This Day in History: Pearl Harbor Is Bombed (1941)

On this date in 1941, at 7:55 a.m. Hawaii time, the Japanese attacked the US naval base at Pearl Harbor. Waves of Japanese dive bombers appeared in the skies over the island of Oahu. Some 350 Japanese zero dive bombers descended on Pearl Harbor, to attack the US Pacific fleet. The US navy and air force were taken by surprise and were not ready for the aerial onslaught. Despite some warning, the US navy and air force were not on a high level of alert and this left the Americans practically defenseless. The Japanese had deliberately targeted the US naval base in order to prevent the Americans from interfering with their planned offensive across the Pacific and Asia.

The attack happened on a Sunday morning and some naval and air force personnel were not on duty. Just before the attack, a radar station identified a large group of aircraft in the vicinity of the island. This was mistakenly believed to be a squadron of B-17 bombers and nothing was done to prepare for Pearl Harbor. When the Zeroes began to bomb the ships moored in the harbor the Americans were dumbfounded.

The attack was devastating and the Japanese torpedoes were to prove lethal. In the attack, much of the US Pacific Fleet was destroyed. Five battleships and cruisers were sunk or severely damaged beyond repair. Three destroyers and eight other ships, including oil tankers were destroyed. The Battleship, the Arizona was sunk by the Japanese bombers’ torpedoes and it sank to the bottom of the sea. In total, some 2400 US servicemen and women died. Over 1000 were badly injured. The Japanese lost some 20 bombers that were shot down by American anti-aircraft. The Japanese also lost some mini-ships that were part of their surprise attack.

The news of the attack stunned America. FDR appeared before Congress and denounced the attack and told his audience that the day will live forever in infamy. He then called on the combined Houses of Congress to vote for a resolution calling for war to be declared on the Empire of Japan. By the end of the day, the US had voted to enter WWII. Japan was a member of the Axis alliance and because the US had declared war on the Japanese, Nazi Germany and Fascist Italy declared war on America. America was at last drawn into the greatest conflict in human history. America was to be drawn into a war on two fronts in the Pacific and in North Africa by 1942.