Stratofortress: The Boeing B-52 Was the Greatest Fighting Airplane? 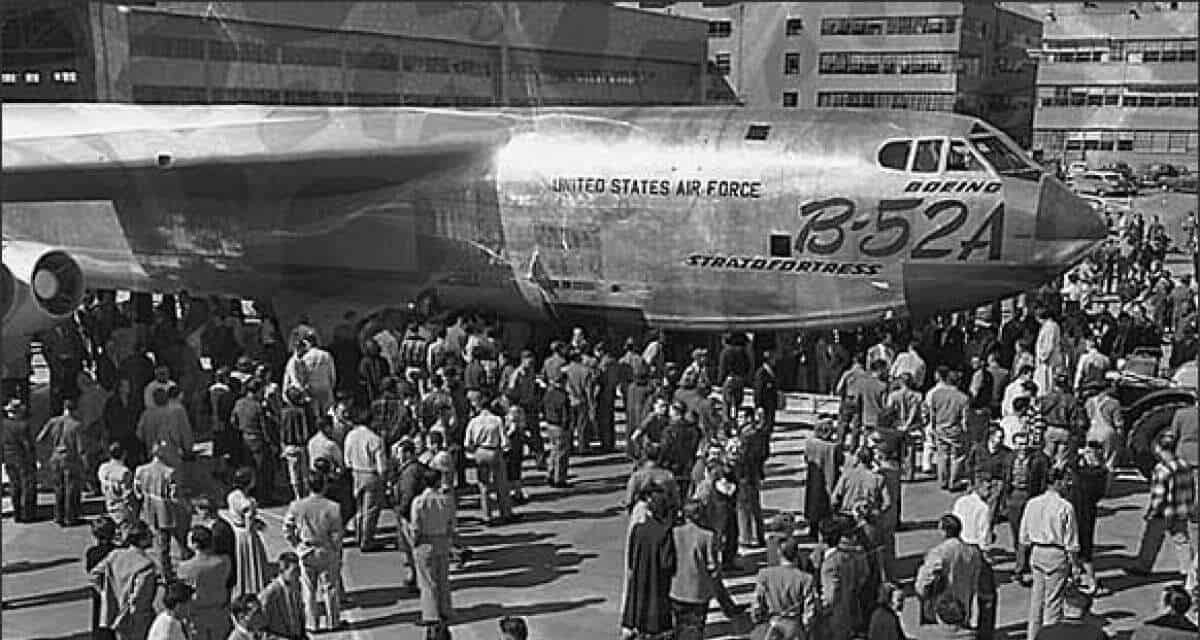 By the early 1980s, the B-52s that remained in the nuclear force carried as their primary weapon a subsonic air-launched cruise missile (ALCM) designated as the AGM-86. The range of the new weapon allowed the B-52 to approach, but not enter, Soviet airspace. Releasing the weapons while still outside Soviet airspace provided the bombers with greater survivability while flooding the Soviet detection and defense systems with small, fasting moving, targets. Of course, the Soviets responded with improvements to their defenses, and the Air Force reacted in kind with newer cruise missiles with better capabilities. The cost and tensions of the Cold War continued to rise on both sides. By 1982, a single B-52 could carry up to 20 AGM-86 missiles, making it once again a formidable nuclear strike weapon.

Beginning in May 1982, the United States and the Soviet Union discussed placing a rein on their expanding nuclear arms inventories. Throughout the decade the talks started and broke off, in response to changing politics and various international crises. Ultimately the START (Strategic Arms Reduction Talks) led to a treaty known as START 1, which was signed by US President George H. W. Bush and Soviet General Secretary Mikhail Gorbachev in July 1991. One of the conditions of the treaty was the removal of the B-52 as a nuclear strike weapon. The Russians were allowed to verify the destruction of the required number of B-52s both via satellite observation and in-person inspection. The designated B-52s were sent to the Aerospace Maintenance and Regeneration Center (AMARG) near Tucson, to await their fate.

Not all of the B-52s in the Air Force inventory were destined for destruction as a result of START 1. The service retained the final variant of the airplane, the B-52H, designated as a conventional bomber. A few of the remaining B-52G variant were distributed as non-flying museum displays under the terms of the treaty. The remaining 365 B-52s were sent to Davis-Monthan Air Force Base, where they were then relocated to AMRG. After arriving, and in accordance with the schedule established by the START agreement, the airplanes were stripped of all serviceable parts. They were then placed into positions in the fields at AMRG. There, the aircraft awaited the services of a giant crane which served as a sort of guillotine to break up the aircraft. The airframes were sliced into separate parts.

A 13,000-pound “blade” was dropped onto the aircraft. Each wing was removed, followed by the fuselage being sliced into three pieces. The aircraft then remained in place for the ensuing three months, a provision in the agreement which allowed the Russians to confirm compliance with the terms of the treaty. After it was determined the “guillotine” was destructive of potentially reusable materials, according to some reports, rescue saws were used to cut up the retired airplanes more efficiently. After confirmation by the Russians, the remains of the former bombers were sold as scrap. The process of destroying the bulk of the B-52 bomber fleet continued into 2001. The US Air Force retained an inventory of less than 100 B-52H variants, yet they still had a significant role to play in American military operations.

On January 16, 1991, a flight of B-52s departed Barksdale Air Force Base in Louisiana (These planes were later destroyed at AMRG). The airplanes refueled inflight, launched conventionally armed AGM-86 stand-off cruise missiles and returned to Barksdale after a flight of 14,000 miles, taking 34 hours from takeoff to landing. It was at the time the longest combat mission ever flown by any aircraft. And it was a complete success. The B-52 eventually flew over 1,620 missions during Operation Desert Storm. About 40% of the ordnance dropped on targets in Iraq during that conflict were delivered by B-52s. They operated from bases in Saudi Arabia, the United Kingdom, Spain, and the remote island of Diego Garcia in the Indian Ocean.

During one mission a B-52 was hit by friendly fire which accidentally targeted the airplane’s radar-controlled tail gun fire control system. In response, the Air Force removed the tail gunner from the bombers’ crews, and over the next several years the weapon was deactivated. The B-52 broke its own record for the longest combat mission in 1996. Two B-52H bombers departed Andersen Field, Guam, took out targets in and around Baghdad, Iraq, and returned. The 34-hour mission covered over 16,000 nautical miles, claiming the longest distance flown for a combat airstrike. B-52s also served in the wars over the collapse of Yugoslavia, in Afghanistan, and in operations against ISIL in Iraq and Syria. Although the Air Force inventory is reduced to less than 80 aircraft, it remains a workhorse of the skies.

As the geopolitical situation around the globe continues to change, the proven versatility of the B-52 means the Air Force will continue to call upon its oldest combat aircraft for the foreseeable future. Plans to re-engine the fleet, giving it still greater capabilities at more economical costs, have been proposed and studied during several budget cycles. Replacement of two far more recent bombers is scheduled for the mid-2020s, the B1 Lancer and the B2 Spirit. Their replacement, the B-21 Raider, is scheduled for deployment by 2026, though in all new weapons systems development there are unavoidable and often seemingly endless delays. Meanwhile, under current plans, the B-52 will keep flying.

As of this writing, no military aircraft has served longer than the B-52. Though some claim that record for the Lockheed C-130 Hercules, that highly successful airplane entered service in 1956. The Hercules does claim the record for the aircraft with the longest period of production, over 60 years and counting. The Hercules has served in the Air Forces or civilian service of over 60 nations. By contrast, the Boeing B-52 has served but one. Whether current plans hold, or changing circumstances cause them to be reconsidered, the design which arose in a Dayton hotel continues to prove its merits across the globe. The US Navy built and operated 29 ballistic missile submarines during the period of B-52 production, and another 12 in the decade which followed (41 for Freedom). All are retired, and most have been scrapped. The B-52 flies on.

“Almost Everything in Dr. Strangelove Was True”. Eric Schlosser, The New Yorker. January 17, 2014

“PB4Y ‘Liberator'”. Display, National Museum of the US Navy”. Online

“The US Air Force Is Gradually Rebuilding Its B-52 Bombers From The Rivets Out”. David Axe, Forbes Magazine. September 27, 2021

“What makes the Boeing B-52 Stratofortress so long-lasting?”. Garrett Reim. Flight Global. 13 September 2019