23 Photos of the Wright Brothers' Flights 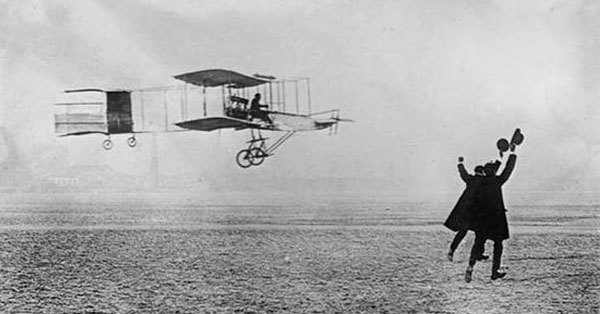 23 Photos of the Wright Brothers’ Flights

The Wright brothers, Orville and Wilbur, are aviation pioneers credited with inventing, building, and flying the first successful airplane. Their first flight was on December 17, 1903, just south of Kittyhawk, North Carolina.

The brothers started their mechanical careers working in their bicycle shop. They also dabbled with printing presses, motors, and other machinery. The Wright brothers started their flight testing with gliders in 1900 to develop their piloting skills. During this time, they worked closely with their employee at their bicycle shop, Charlie Taylor, building their first airplane engine.

The brothers built a small wind tunnel and were able to accurately collect data which helped them design and build more effective wings and propellers. Their breakthrough in flight was a result of their invention of the three-axis control that allows the pilot to steer the aircraft effectively and maintain its equilibrium. Their first patent was not for the invention of a flying machine but rather for a system of aerodynamic control that manipulated the flying machines surfaces.

1906 saw the rise of skepticism from the European aviation community. The press, especially the French press, developed an anti-Wright brother stance. A Paris edition of the New York Herald, in an editorial from February 10, 1906, stated “The Wrights have flown or they have not flown. They possess a machine or they do not possess one. They are in fact either fliers or liars. It is difficult to fly. It’s easy to say, we have flown.” The Founder of Aero-Club de France, Ernest Archdeacon, scorned the Wright brothers, stating that “the French would make the first public demonstration of powered flight.”

In 1908, after the Wright brothers’ first flights in France, Archdeacon apologized.