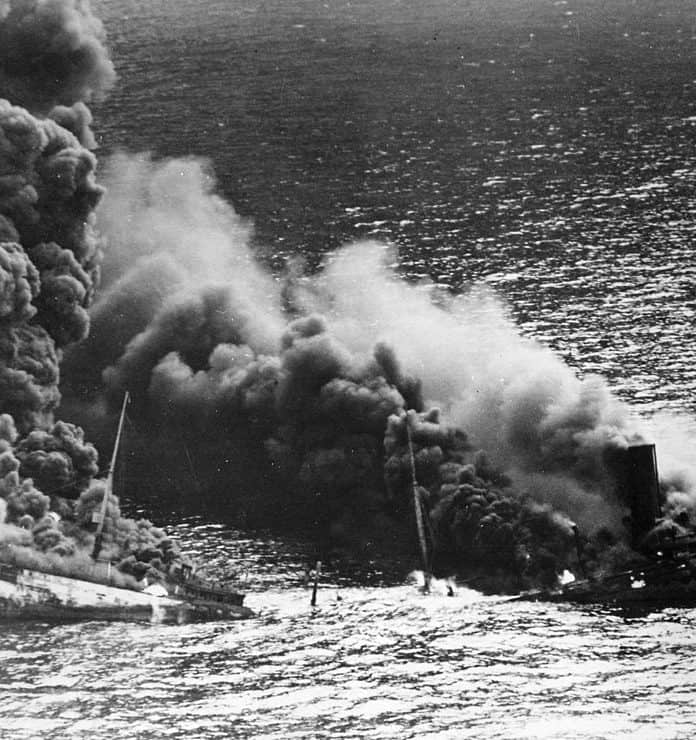 The longest continuous campaign of the Second World War, the Battle of the Atlantic was critical to the success of the Allies. Great Britain required 1 million tons of supplies of all types per week, in order to feed its population and continue the fight against Germany and Italy. The supplies could only arrive, from the Empire and the United States, by ship. In its early days success and failure was measured in tonnage; how many tons arrived in Great Britain’s ports, and how many tons was sent to the bottom of the sea by the German Navy and aircraft. During the long campaign, thousands of merchant ships – nearly all manned by civilians – were sunk.

The German surface fleet was not large enough to challenge the Royal Navy at sea, and it used its capital ships as surface raiders to destroy commerce. U-boats lurked in the sea lanes along the Canadian east coast, and after America entered the war along its coast as well. The waters off South America and Africa were also hunting grounds for the Germans. Early in the war surface raiders swept around the Cape of Good Hope into the Indian Ocean. After the surrender of the French, the British Navy also had to contend with the Italian fleet in the Mediterranean. All the while, merchant seamen, in crawling, heavily laden ships, struggled to keep Britain alive. Here is the story of the Battle of the Atlantic during World War II.

1. Germany deployed many ships just prior to the Invasion of Poland

The Kriegsmarine (German Navy) deployed surface ships and as many U-boats as were ready for sea prior to the attack on Poland. Among their surface ships were a type known to posterity as pocket battleships. Deutschland (later renamed Lutzow) and Admiral Graf Spee were two such ships. Deutschland sank a few merchant ships in the North Atlantic, stopping them and taking prisoner their crews in accordance with prize rules. Admiral Graf Spee evaded detection and embarked on a cruise in the South Atlantic which carried the vessel into the Indian Ocean. The German ship also followed the prize rules as it sank 9 ships totaling just over 50,000 tons.

In December Graf Spee encountered three British cruisers, Ajax, Achilles, and Exeter. In the running gun battle which ensued, Exeter was heavily damaged. Ajax was also badly hit, and Achilles too was hit by the German guns. Graf Spee was also hit, its fuel processing system badly damaged, which left the Germans only about 16 hours of steaming time. It was not enough for the ship to return home, and while under fire repairs were impossible. Its Captain, Hans Langsdorff, steered the ship up the River Plate estuary to the neutral port of Montevideo. There neutrality laws prohibited a stay of more than 24 hours, unless the ship was deemed unseaworthy. There were other neutrality laws which affected the ship as well.