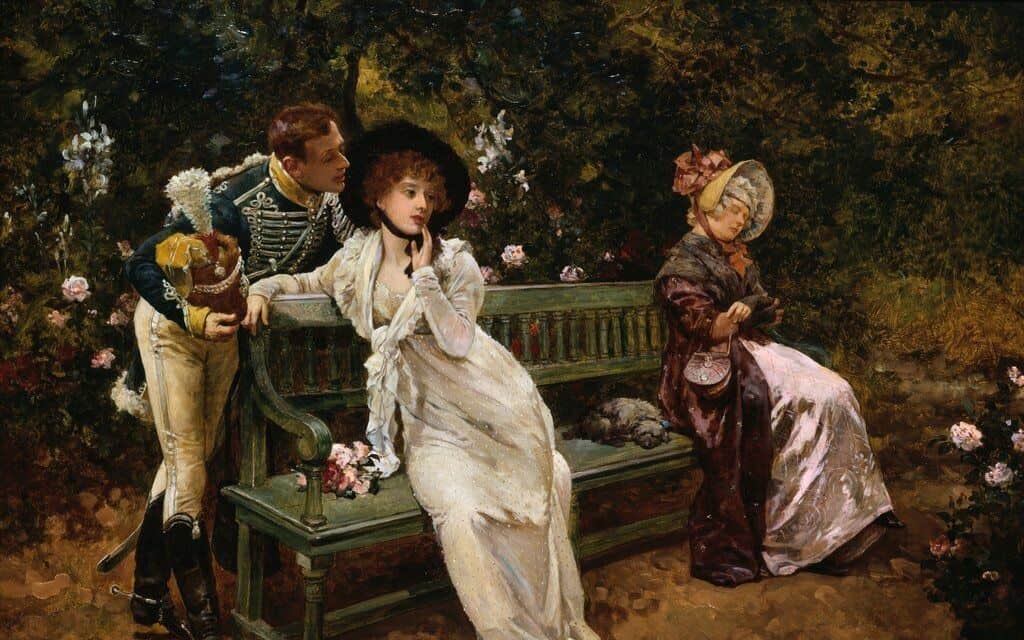 8. A Crime That Gripped the Country

A bloody razor was found near the body of Maria Bickford, along with pieces of Tirrell’s clothes and broken-off sections of a distinctive cane known to belong to him. Police immediately began a search for Tirrell, but he had fled. He had last been spotted bargaining with a livery stable keeper, reportedly saying that he was “in a scrape” and needed to get away. Tirrell was eventually tracked down to New Orleans, where he was arrested on December 6th, 1845, and extradited to Massachusetts to face trial for murder. The story quickly became a local and national sensation. It combined the salacious details of a seedy romance with a courtesan, the sin of adultery, and the class divide briefly bridged between a scion of a wealthy and respectable family who abandoned his wife and children for a fallen woman.

All of that was capped off with a gruesome murder, nationwide manhunt, arrest, and trial. Tirrell’s parents hired Rufus Choate, a former US Senator and respected Boston lawyer known for his creative defense strategies. At the trial, prosecutors called in numerous witnesses who established strong circumstantial evidence that Tirrell was the culprit. The defendant’s lawyer, Choate, emphasized that the evidence was circumstantial and that nobody had seen Tirrell actually murder the victim, and built his defense on the then-innovative sleepwalking defense.

Rufus Choate argued at the trial of Albert Tirrell that his client was a chronic sleepwalker, and that if he did kill Mrs. Bickford, he must have done so while in a somnambulistic state. As such, he would have been unaware of his actions and so could not legally be held responsible for them. Defense witnesses testified that Tirrell had seemed to be in a trance on the morning of the murder, and that he sounded weird and appeared “in a strange state, as if asleep, or crazy”. Another witness testified that he spoke with Tirrell when he arrived in his hometown of Weymouth, and that the defendant claimed that sought to flee from an adultery indictment. When the witness informed Tirrell of Mrs. Bickford’s murder, he seemed genuinely shocked.

Choate also attacked the victim and her character. He argued that as professional practiced in the arts of romance, she had ensnared the hitherto innocent Tirrell with her charms and seduced him away from his wife and children. Then, probably guilt stricken at what she had done, she committed suicide. As Choate pointed out, courtesans often killed themselves in disgust and despair over their lifestyle and profession. It was an argument that resonated with the jurors’ cultural mores in early Victorian America. It was a time of disquiet over a recent proliferation of “fallen women” who handed their cards to passersby on city streets, so it was not difficult to convince them that the victim was as morally culpable as her killer.

6. The Man Who Got Away With Murder

After Rufus Choate delivered a six-hour closing argument, the jury retired to deliberate. It returned two hours later with a not guilty verdict, on grounds that Tirrell was unaware of his actions at the time, and was thus not legally responsible. Other defendants in subsequent years were acquitted based on a sleepwalking defense, but ironically, America’s first successful sleepwalking defense was probably a sham. While people in a somnambulistic state are capable of complex actions, Tirrell’s failed attempt to set fire to the brothel after the murder indicates that he sought to destroy evidence of his crime and cover his tracks.

Such actions denote that he was well aware of his actions and their consequences. By contrast, real sleepwalkers do not try to destroy evidence of their crimes while sleepwalking. Tirrell was probably guilty of the murder of Maria Bickford. He was almost certainly guilty of the attempted arson of the brothel and the consequent attempted murder of its occupants, or at least the reckless endangerment of their lives. Today, it is highly unlikely that a defendant in similar circumstances would be acquitted on a sleepwalking defense.

5. The Teenager Who Went From Priest to Emperor

Caesar Marcus Aurelius Antoninus Augustus, better known to history as Elagabalus (203 – 222), was Roman emperor from 218 until his death four years later. His eastern religious practices, which would have been highly unusual in contemporary Rome if performed by a private citizen, were bizarre and shocked Roman sensibilities when carried out by an emperor. As a youth, he had served as a priest of the Syrian sun god Elagabalus. Although he was related to the imperial family, nobody expected him to ever become emperor.

Then his cousin, the Emperor Caracalla, was assassinated, and the teen priest’s grandmother proved herself a wily politician, and successfully intrigued to have him succeed the deceased as ruler of the Roman Empire. The new teenage ruler took his deity’s name as his own and brought its worship to Rome, where he built it a lavish temple. There, before the eyes of astonished senators, high ranking dignitaries, and the public, he danced around the deity’s altar to the sound of cymbals and drums.

4. Too Much Romance Got This Emperor Killed

Elagabalus further offended sensibilities when he tried to unify the Roman pantheon with his religion, with Elagabalus as supreme god, above Jupiter, king of Rome’s gods. To that end, he had the most sacred relics of the Roman religion transferred to his new temple. Additionally, he ordered that other religions, including Jews and the nascent Christians, transfer their rites to Elagabalus’ temple. What got the new emperor in the most trouble, however, is that he might have been the most flamboyantly homosexual ruler in history, who openly went about in women’s clothing and publicly fawned upon male lovers.

He elevated his partners in romance to high positions, such as a charioteer whom he sought to declare Caesar, and an athlete given a powerful position at court. He also reportedly solicited himself in the imperial palace. Homosexual practices were not unusual in Ancient Rome – respected emperors such as Trajan and Hadrian had male partners, and Hadrian created a religious cult for a youthful lover who had accidentally drowned. However, Elagabalus was the passive, or receptive partner, and that was considered shameful by contemporaries. That and the open effeminacy, especially from an emperor, made Elagabalus an object of contempt, and led to his assassination in 222.

Kichizo Ishida (1894 – 1936) was a Japanese businessman and restaurateur with a reputation for being a ladies’ man. He began his career off as an apprentice in a restaurant that specialized in eel dishes, and at age twenty four he opened what became a highly successful restaurant, the Yoshidaya, in the Nakano neighborhood of Tokyo. By 1936, he seems to have left the management of his other business affairs to his wife, and dedicated himself to womanizing. Early in 1936, he began a torrid romance with a recently hired employee, Sada Abe, that ended badly.

Sada Abe (1905 – 1971) had been a Geisha and a former courtesan before she was hired on as an apprentice at Kichizo’s restaurant. It did not take long after she started work before her boss made advances, which advances she eagerly welcomed. The duo became infatuated with each other, and spent days on end engaged in marathon nooky sessions at hotels, where they did not pause even when maids came in to clean the rooms. Unfortunately for Kichizo, Sada’s infatuation with him grew into obsession.

2. A Lover Who Mistook Attempted Murder For Attempts to Spice Up the Romance

Sada Abe began to get jealous whenever her lover Kichizo Ishida returned to his wife, and she began to toy with the idea of murder as a means to keep him forever to herself. She bought a knife and threatened him with it during their next marathon session, but Ishida assumed it was role play to spice up the romance and was turned on rather than concerned. That threw Sada off. Later during the marathon session, she again steeled herself to kill him, this time via strangulation with a Geisha belt during love making.

That only turned her lover on even more, and he begged her to continue, which again threw her off. Finally, Kichizo fell asleep, at which point Sada, gathered her nerve one more time to do the deed, and she went ahead and strangled her sleeping lover to death with a Geisha scarf. Then she took out the knife and castrated him, carved her name on his arm, and with his blood wrote “Sada and Kichizo together” on the bed sheets before she fled.

1. The Horrific End of This Romance Threw a Country Into a Panic

The corpse of Kichizo Ishida was discovered the next day. When news of the gruesome murder and mutilation broke, and that a “sexually and criminally dangerous woman was on the loose”, Japan was gripped with what became known as “Sada Abe panic”. Police eventually caught up with and arrested her, at which point they discovered Kichizo Ishida’s genitals in her purse. When questioned why she had Kichizo’s appendages her purse, Sada replied: “Because I couldn’t take his head or body with me. I wanted to take the part of him that brought back to me the most vivid memories”.

She was tried and convicted and served five years in prison before she was released. She went on to write an autobiography and lived until 1971. The Sada-Kichizo romance and its painfully weird conclusion became a sensation in Japan, embedded in its popular culture and acquiring mythic overtones ever since. The story and variations thereof has been depicted in poetry and prose, both fiction and nonfiction, portrayed in movies and television series, and interpreted over the decades by various philosophers and artists.

All That is Interesting – Andrew Robinson Stoney May Have Been England’s Worst Husband, Ever

Cracked – 5 Ways Love and Dating in the Past Were Weird

Goldsworthy, Adrian – How Rome Fell: Death of a Superpower (2009)

Historia Augusta – The Life of Elagabalus

Medium – Felix Faure, the French President Who Died Getting a Blow Job

Messy Nessy Chic – When the Phallus Was Fashion

National Public Radio – When Flirtation Cards Were All the Rage

Northern Echo, November 24th, 2017 – Andrew Robinson Stoney, the Man Who Locked His Wife in a Cupboard Until She Was Dead