Facts from the Middle Ages that Are Full of Surprises 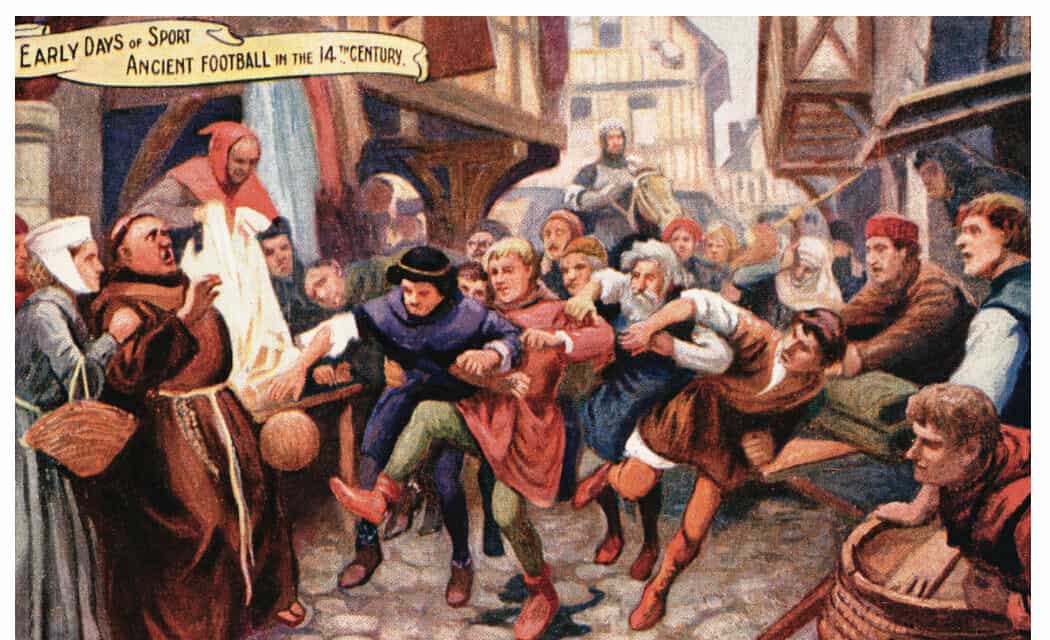 Facts from the Middle Ages that Are Full of Surprises

9. This Medieval Monarch Slept With His Live Sister and Dead Wife

Medieval Europe’s greatest monarch was probably Charlemagne, who unified much of western and central Europe into what became known as the Carolingian Empire. In 800, he was crowned by Pope Leo III as “Emperor of the Romans” – the first in a long line of Holy Roman Emperors that lasted for over a thousand years, until Napoleon Bonaparte abolished the Holy Roman Empire in 1806. Charlemagne was also a weirdo, who was into incest and necrophilia. He had an incestuous relationship with his sister Gillen, and fathered upon her a son/ nephew, named Roland.

Sleeping with his sister was not the worst of it: Charlemagne also reportedly had a thing for sleeping with corpses. A variety of texts from the ninth century refer to Charlemagne repeatedly engaging in, but refusing for a long time to confess to, some “unspeakable sin”. He eventually got it off his chest, and sought absolution for what some modern scholars think was a predilection for necrophilia. That gave rise to legends in which Charlemagne’s partiality to corpses extended from sexually satisfying his lusts with random corpses, to sleeping with his wife’s corpse after her death.

8. In Hindsight, King Martin I of Aragon Should Have Slept Off an Upset Stomach Instead of Summon His Jester

King Martin I of Aragon, also known as Martin the Humane (1356 – 1410), ruled Aragon, Valencia, Sicily, Sardinia, and Corsica, from 1396 until his death. He ascended the throne after his older brother, King John I, died without male issue – although the deceased had daughters. Martin’s reign was turbulent from the outset, rife with unrest from scheming nobles. He also had to overcome challenges to his claimed right to ascend the throne, particularly from the family and partisans of his nieces, his late brother’s daughters. He beat back invasions by his nieces’ supporters, but they kept up their claims, and so did their sons.

Martin reportedly died in 1410 after consuming an entire goose. Something about the fowl was foul and did not agree with him, and gave the king indigestion. So he retired to his chamber, and summoned the court jester. The jester took his time in arriving. When he finally showed up, Martin asked him where he had been. The jester replied: “in the next vineyard, your majesty, where I saw a young deer hanging by his tail from a tree, as if somebody had punished him for stealing figs“. As seen below, that joke was a killer – literally.

To most people today, the joke about the deer hanging by its tale probably sounds lame. However, something about it and the image it evoked struck King Martin I as over the top funny. Apparently, while some jokes are timeless and universal, many more are time and culture sensitive. It seems that in fifteenth century Aragon, deer hanging by their tails as punishment for stealing figs were considered to be super funny. So funny, in King Martin’s case, that he laughed uncontrollably for three hours.

The king’s fit of uncontrollable laughter finally ended when he fell out of the bed and hit the floor, stone dead. It was a funny death, but the consequences were serious. Martin had only one son, but he was illegitimate, and he failed to secure him the succession. So Martin ended up being the last king of the Aragonite House of Barcelona (878 – 1410), and was succeeded by a nephew, Ferdinand I of Aragon. Martin however had gone out laughing, which was not a bad ending for a royal life or dynasty. Especially when we consider the many nasty possibilities the often surrounded the end of royal dynasties and noble lineages.

6. Town vs Gown Was Taken to Extremes in the Middle Ages

Tensions between universities, with their populations of academics and students, and the surrounding community of ordinary folk going about their everyday lives, have been around since seemingly forever. Long before universities had even been invented, places known as centers of scholarship, such as ancient Athens or Ptolemaic Alexandria, had often experienced bad blood between the academics who flocked there in scholarly pursuits, and the wider population amongst whom they dwelt. However, relatively few such “town vs gown” tensions have ever boiled over and erupted in as dramatic a fashion as happened in Oxford in 1355.

On February 10th of that year, St. Scholastica Day, two Oxford University students, Roger de Chesterfield and Walter Spryngheuse, were having drinks at the Swindlestock Tavern in Oxford. At some point, they complained to the taverner, John Croidon, about the quality of the drinks. He did not take kindly to their complaints. One thing led to another, heated words were exchanged, and the students ended up throwing the drinks in the tavern keeper’s face, then proceeded to beat him to a bloody pulp. That incident, as seen below, led to medieval England’s biggest town vs gown rumble.

5. Medieval Oxford Students Bit More Than They Could Chew When They Took on the Townies

After a pair of Oxford University students violently assaulted a local tavern keeper, the town’s mayor asked the university to arrest the academic hooligans. However, the university’s authorities ignored his request. Instead, 200 students sided with their thuggish classmates, Walter Spryngheuse and Roger de Chesterfield, and went on a rampage during which they assaulted the mayor and other Townies. That was too much for the locals, who mounted a counter-riot of their own, with hundreds pouring in from the countryside to help hunt down the students

Crying: “Havoc! Havoc! Smyte [smite] fast! Give gode knocks!” the Townies fell upon the students and routed them. By the time it was over, 63 Oxford students had been killed, along with 30 locals. In the aftermath, the authorities sided with the university. Every year thereafter, on February 10th, Oxford’s mayor and city councilors were made to atone by marching bareheaded through the streets. They then had to attend mass, and pay a penny for each student killed. That tradition lasted for 425 years, until 1825, when an Oxford mayor finally put his foot down and refused to participate.

4. Eels Were Used as Money in the Middle Ages

Eels are notoriously slippery, and that difficulty in getting a hold of them might explain why they were sometimes used as currency during the medieval period. Eels may not be a popular dish in the West these, but they were once such a common staple in medieval England that they were used as currency. For example, the Domesday Book lists hundreds of English watermills whose rent was paid in eels, bundled in “sticks” of 25. One proprietor who received his rent in eels was “Giles brother of Ansculf”, who got 1000 sticks from his watermill in Bottisham, Cambridgshire, and 2000 sticks from his watermill in Datchet, Buckinghamshire.

How much were eels worth, though? In 1273, King Edward I issued price controls for the sale of certain foods in London, and a stick of 25 eels was listed as 2 pence, or the equivalent of about $9 in 2021 US dollars. Edward’s price controls were issued almost two centuries after the Domesday Book, but inflation was nowhere near as great in those days as it is day. Thus, if we assume that 2 pence had roughly the same purchasing value in both Domesday Book and Edward I days, Giles brother of Ansculf got about $9000 in rent for his Bottisham watermill, and $18,000 for the one in Datchet.

If the question of who the middle ages’ deadliest man comes up, many would assume it must be Genghis Khan. However, while Genghis is one of history’s scariest people, he was not as lethal as an even deadlier medieval warrior: Timur (1336 – 1405). Byname Timur Link, which means “Timur the Lame” in Turkish, Timur was the last of the great Eurasian Steppe conquerors to terrify the civilized world with widespread devastation and butchery. He is chiefly remembered for his savagery, and his wide-ranging rampage, from India to Russia and the Mediterranean and points in between. Timur is estimated to have killed about 17 million people, amounting to 5 percent of the world’s population at the time. That would be equivalent to 390 million people today.

A Muslim Turko-Mongol who claimed descent from Genghis Khan, Timur was born in the Chagatai Khanate in today’s Uzbekistan, which was ruled by Genghis’ descendants at the time. His rise began in 1360, when he led Turkic tribesmen on behalf of the Chagatai Khan. However, the Khan was murdered by rivals, which triggered a struggle for power. When the dust settled, Timur had emerged as the power behind a throne occupied by a figurehead Chagatai puppet, through whom Timur ruled.

2. Timur Brought Devastation Wherever He Went

Timur’s claimed descent from Genghis Khan might have been dubious. That did not stop him, however, from using it to justify his conquests as a restoration of the by then defunct Mongol Empire, and as a re-imposition of legitimate Mongol rule over lands that had been wrongfully seized by usurpers. With those justifications, Timur spent 35 years roiling the medieval world, and earning a reputation for savagery while bringing fire and sword to the lands between the Indus and the Volga, the Himalayas and the Mediterranean.

Among the cities he left depopulated and in ruins were Damascus and Aleppo in Syria; Baghdad in Iraq; Sarai, capital of the Golden Horde, and Ryazan, both in Russia; India’s Delhi, outside whose walls he massacred over 100,000 captives; and Isfahan in Iran, where he massacred 200,000. Timur was also in the habit of piling up pyramids of severed heads, cementing live prisoners into the walls of captured cities, and erecting towers of his victims’ skulls as object lessons and to terrorize would-be opponents.

Timur’s most dramatic victory came at the expense of the Ottoman Turks. A rising power in their own right, the Ottomans were as exuberantly confident in their prowess as was Timur. For years, insulting letters were exchanged between Timur and the Ottoman Sultan, Bayezid, until Timur finally showed up in 1402, Timur crushed Bayezid, and took him captive. In one of the medieval era’s greatest acts of ownage, Timur humiliated his prisoner by keeping him in a cage at court, while Bayezid’s favorite wife was made to serve the victor and his courtiers, naked.

Timur’s decades-long rampage finally came to an end in 1405, while he was preparing to invade China. He took ill while encamped, and died before launching the campaign. His grave was reportedly cursed. His body was exhumed by Soviet anthropologists on June 19th, 1941. Carved inside his tomb were the words “When I rise from the dead, the word shall tremble“. Two days later, the Nazis launched the largest military operation of all time against the USSR, which the Soviets survived only by the skin of their teeth. Just to be on the safe side, in November, 1942, shortly before Operation Uranus which led to the first major Soviet victory at Stalingrad, Timur was reburied with full Islamic rituals.

Keegan, John – The Face of Battle: A Study of Agincourt, Waterloo, and the Somme (1983)

Tradition in Action – A World of Brilliant Colors