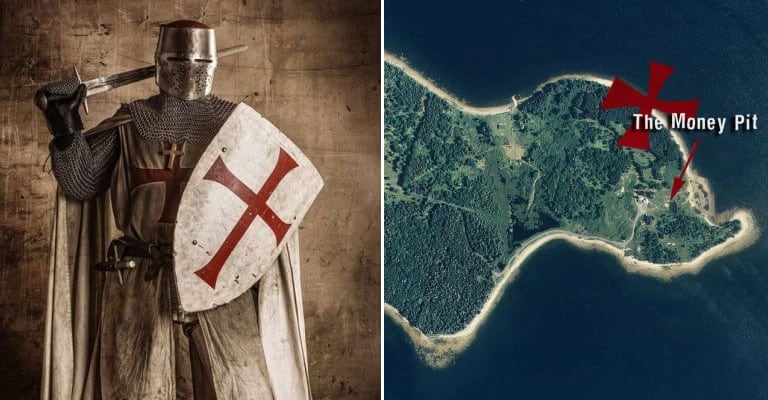 The Knights Templar is an almost legendary group of warrior monks whose story has colored many cultural tales. They are referenced in Indiana Jones and the Last Crusade, as well as The Da Vinci Code. Some people claim that the Freemasons – who lie at the heart of many conspiracy theories throughout history – have their origins in the Knights Templar. Others believe that they found a mysterious treasure at the Temple of Solomon in Jerusalem during the Crusades. Their story is filled with so much intrigue, along with speculation, that separating fact from fiction can be a challenge.

During the Crusades, this band of warrior monks protected Christian pilgrims from Europe on the way to the Holy Lands. In the process, they established one of the world’s first banking systems. The way that it worked is a European nobleman would sell off some of his property to the order before embarking on a pilgrimage. An accountant in the order would issue him a deed, akin to a receipt, saying how much money he had “in his account.” As he made his journey to the Holy Land, when he stopped at an inn run by the knights, he could present his deed, along with a form of identification, and thus pay for services.

In the Holy Lands, they were like the Delta Force of the Crusades. They were the first standing army since the fall of the Roman Empire. Many crusaders were hordes of peasants and farmers who took up arms at the behest of the pope and their local leaders. They were not trained in warfare and often had nothing but their own religious fervor to guide their fighting. The Templars, though, were highly trained warriors who were experts in battle. Their services – as bankers, as hospitallers (for their hospitality), and as warriors – became highly valued.

In exchange for protecting Christian pilgrims traveling to Jerusalem, the Order of the Knights Templar was able to gain power, prestige, and vast amounts of wealth that made the organization one of the strongest in all of Europe. Members were effectively exempt from local laws because they were answerable only to the pope. They became so powerful, in fact, that they were seen as a threat to some kings, particularly King Philip of France, who ruled at the beginning of the fourteenth century. When he brought the order to its knees in 1307, and the pope later banned them, they didn’t disappear. They are still alive in many people’s imaginations today.

Of all the mystery that surrounds the order, one of the most enduring legends of the Knights Templar is that of their treasure. What exactly did it consist of, and what happened to it? Did it exist at all, or was it a fabrication invented by nobles to have a reason to degrade the knights? One of the most intriguing theories is that the treasure lies hidden deep underground in a remote island off the coast of Nova Scotia: Oak Island.

Origin of the Knights Templar

The organization that came to be known as the Knights Templar began about 23 years after the First Crusade when Christian warriors from Europe seized Jerusalem. Many European Christians wanted to make a pilgrimage to the Holy Land, but the journey was long and dangerous, as travelers were often robbed by bandits. A French knight named Hugues de Payens obtained approval from the pope to form an organization that would protect pilgrims who were traveling to and from the Holy Land. The pope granted him permission, and a small cohort of nine warrior monks, led by de Payens, began their mission by traveling to Jerusalem.

Once in Jerusalem, they made the Temple Mount their headquarters. The Temple Mount refers to the place on which King Solomon built his legendary temple to Yahweh, which housed the Ark of the Covenant and the presence of God. The temple was pillaged in the sixth century BCE, then rebuilt by King Herod in the first century. It was ruined in 70 AD. Many people believe that before it was destroyed in the sixth century BCE, King Solomon’s treasure was hidden somewhere inside. Before the second destruction, even more treasures, particularly from the life of Jesus Christ, may have been buried. Rumors spread that the Knights Templar were at the Temple Mount because they intended to recover the lost treasures.

The Knights Templar went all but completely off the radar for a few years after they first arrived in Jerusalem. They weren’t protecting pilgrims on their way to Jerusalem, as their original charter had stated. Many people believe that they were digging for treasure, particularly in the underground stables that housed the horses of King Solomon. Nobody knows for sure if they found any treasure, or if there are people who do know, they have been quiet about it for centuries.

One prevailing belief is that the Knights Templar found holy relics that enabled them to become particularly powerful. When they went back to Europe, 10 years after the order was first founded, they became very wealthy very quickly. Noblemen gave them large tracts of land, and the pope even issued a papal bull that said that the warrior monks were accountable only to the Vatican. They could not be prosecuted by any state institutions. Speculation over how they gained so much wealth and prestige so quickly, going from obscurity to notoriety virtually overnight, has led to numerous theories, particularly about their alleged treasure.

Not everyone was pleased with the prestige of the Knights Templar. On Friday the 13th of 1307, King Philip of France rounded up all of its members. He tortured and executed many of them, but quite a few probably escaped. Some Templar ships that were docked off the coast of France disappeared the night before the roundup. One particularly prominent belief is that members of the Knights Templar carried off their wealth on these ships. Nobody knows exactly where the treasure went. There are plenty of theories, though, yet none of them have been proven.

The Treasure of the Knights Templar

While one can only speculate about what the treasure of the Knights Templar actually was, theories abound as to where it was hidden. One of the most pervasive assumptions is that it is buried deep underneath Oak Island in Nova Scotia, Canada. What makes this theory so compelling yet incredible is that Oak Island is far from France, from where the treasure was supposedly secreted away. The knights who survived the Friday the 13th massacre would have had to carry it all the way across the Atlantic Ocean, only hoping that they would find land on the other side.

The theory begins with the idea that the knights first carried the treasure up to Scotland, where they would find greater freedom, especially in light of laws there that allowed for greater freedom of religion. Some believe that those that stayed behind in Scotland were behind the construction of the mysterious Rosslyn Chapel, a Medieval church that lies a few miles south of the capital city, Edinburgh. To protect the treasure, some knights carried it first to Iceland, then on to Greenland, and finally to Nova Scotia, Canada. If the theory holds, then the Knights Templar may have preceded Christopher Columbus to the New World by over a century.

According to local legend, Daniel McGinnis, the first recorded settler on Oak Island, found a depression in the earth while surveying land for a farm in 1799. People claimed that Captain Kidd had buried his treasure there. A furious treasure hunt began, where several people lost their lives. However, there is no real evidence that treasure hunting began on Oak Island until the mid-nineteenth century. And there is no evidence that Captain Kidd buried treasure there. If anything, the evidence suggests that any treasure on Oak Island was from the Templars.

What the treasure hunters discovered is a pit that, at ten-foot intervals, had shafts made of either logs or flagstones. Clearly, someone had already visited Oak Island and dug the hole intentionally and with great care, presumably to bury a treasure of great value. In the time since the pit’s discovery, investors have put so much money into finding what lies hidden in it that it has come to be known as the “money pit.” Several people have died trying to find what lies at the bottom of the pit, leading to what some call “the curse of Oak Island,” rather than the treasure.

Symbols and icons found near the pit indicate the possibility of a Templar presence. Combined with the mystery and intrigue surrounding the group’s disappearance in Europe in the fourteenth century, many believe that the theory of the Templars burying their treasure at Oak Island is entirely plausible. If that is the case, then things like the Ark of the Covenant and the Holy Grail, along with other mysterious relics and artifacts that the Templars uncovered at Solomon’s Temple, may indeed be buried at Oak Island.

“Secrets of the Knights Templar.” The History Channel.

“Who were the Knights Templar?” by Elizabeth Nix. The History Channel. October 17, 2012.