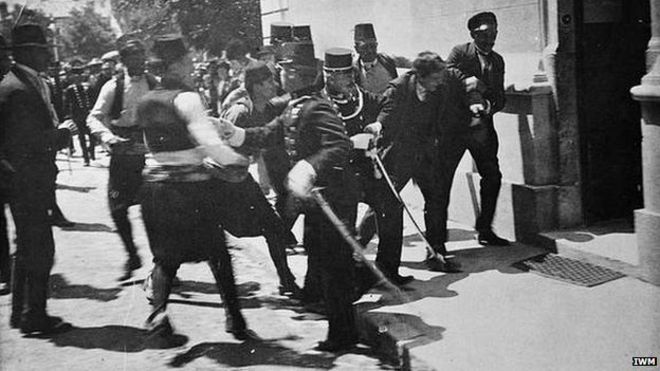 3. When Serbia Was a Full-Blown State Sponsor of Terrorism

The Black Hand was established in 1911 to resume the Serb campaign against Austria-Hungary, oversee its activities, and establish and coordinate nationalist revolutionary cells in Bosnia. The organization trained guerrillas, saboteurs, propagandists, and assassins, and sent them into Austria-Hungary to destabilize it, and stir up nationalist resentment among its Serbian subjects.

Serbia became a full-blown state sponsor of terrorism. The Black Hand’s leadership was composed primarily of high-ranking Serbian officials and army officers, including the crown prince. The Serbian government was kept well informed of the group’s terrorist activities. By 1914, Apis was a colonel in charge of Serbia’s military intelligence and was the Black Hand’s primary mover and shaker. That year, he hatched a plot for the assassination of Archduke Franz Ferdinand, the heir to the Austro-Hungarian throne.

The Serbian Black Hand’s assassination of Archduke Franz Ferdinand in Sarajevo on June 28th, 1914, was the culmination of a comedy of errors entailing various failed attempts. The parade of follies included a terrorist who threw a bomb that didn’t kill its target, then attempted suicide by swallowing expired cyanide, and tried drowning himself in a river that was only inches deep. One of the terrorists, Gavrilo Princip, gave up and went to grab a bite at a cafe. To his astonishment, the Archduke’s convertible, whose chauffeur had taken a wrong turn, suddenly came to a stop just a few feet away.

As the driver attempted to reverse, Princep stepped up to the open vehicle and fired two shots, killing Franz Ferdinand and his wife. A Rube Goldberg chain of events ensued, leading to a global conflagration. Austria declared war on Serbia. That dragged in Russia, Serbia’s protector. That in turn dragged in Germany, Austria’s ally. That brought in France, Russia’s ally against Germany. That prompted Germany to invade France via Belgium. German violation of Belgian territory brought in Britain, a guarantor of Belgian sovereignty.

1. Assassination Leads to the Deaths of Millions

The assassination of Archduke Franz Ferdinand led to a war in which over 70 million men were mobilized, and 10 million were killed. Four empires vanished, and the global center of power shifted from the Old World to the New. An age of aristocracy and traditional forms of government came to an end, and a fervent and fast-paced era of democracies, juxtaposed with radical ideologies and totalitarianism, took its place.

Serbia suffered greatly for its sponsorship of terrorism. It stood off an initial Austrian attack, but was overrun in 1915. A fifth of Serbia’s population perished during the war – the highest percentage suffered during the conflict. Serbia’s government finally had enough of the Black Hand, which had grown too powerful and too meddlesome. In 1917, its leaders were arrested and tried on trumped-up charges for conspiracy to murder the Prince Regent. They were convicted, sentenced to death, and executed, and the group was outlawed.

Encyclopedia Britannica – 9 Infamous Assassins and the World Leaders they Dispatched

Gonick, Larry – Cartoon History of the Universe: From the Big Bang to Alexander the Great (1990)

Holland, Tom – Rubicon: The Last Years of the Roman Republic (2003)

Spectator, The, December 18th, 2012 – An Assassination at Christmas