The Bloody Assassination of a Roman Dictator "Julius Caesar" 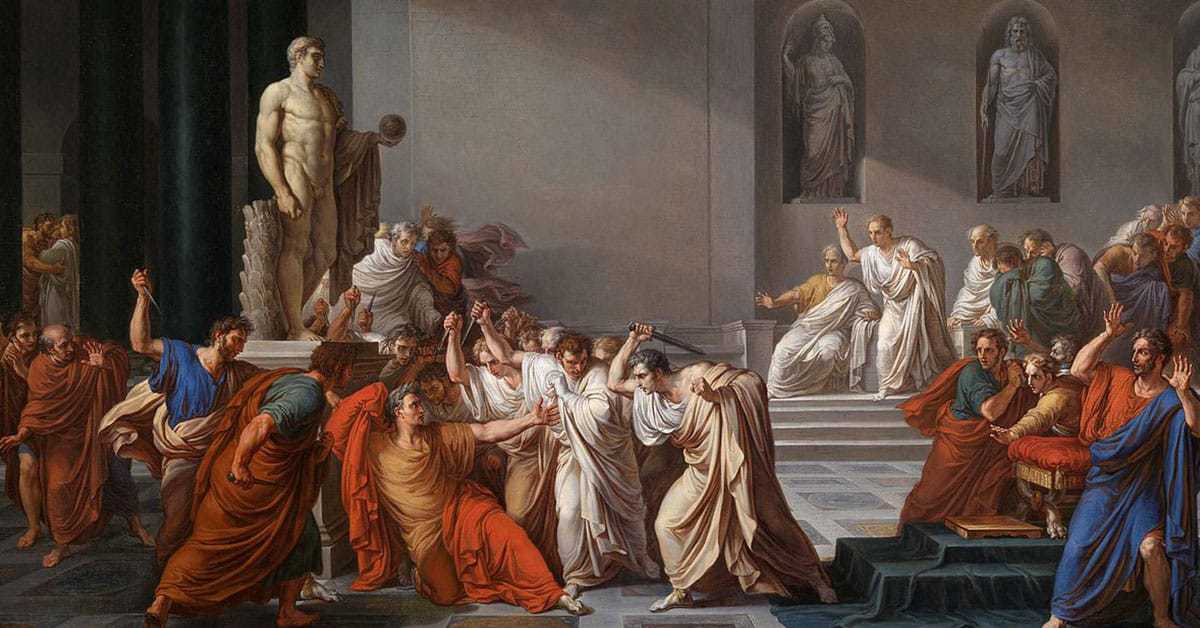 The Bloody Assassination of a Roman Dictator “Julius Caesar”

The murder of Julius Caesar on March 15, 44 BC was one of the most significant assassinations in history. The repercussions of the event included yet another Roman Civil War and the victor, Octavian, became the first Emperor of Rome. It occurred three days before Caesar was due to leave Rome, and he had planned to leave the city in the hands of trusted advisors.

In truth, the assassination of Caesar was one of many political crises in Roman history. As Rome’s territory started to grow, so did the level of violence at home. The Civil Wars of the 80s BC were tinged with Roman blood as Sulla took control and became dictator for a short period. The majority of the most important men in Rome during the first century BC; Cicero, Pompey, Crassus and Mark Antony among others, died violently, so the death of Caesar probably had an air of inevitability about it given the political landscape at the time.

The assassination came at a time when Julius Caesar probably believed he was invincible. After defeating Pompey at Pharsalus in 48 BC, he was the most powerful man in Rome. He mopped up resistance to his rule at the Battle of Munda on March 17, 45 BC. Caesar was named dictator for 10 years in 46 BC and became dictator for life sometime between the middle of January and early February 44 BC.

He was one of the greatest military commanders of all time, and when he finally settled in Rome, he had won a host of significant victories and was involved in at least 50 battles. Caesar endeared himself to the citizens of Rome by introducing a number of reforms such as giving grain to the urban poor. He also offered land to seasoned veterans, cleaned up the dangerous streets of Rome and increased employment through the introduction of public work projects.

Although his reforms won him plenty of admiration from the people of Rome, they terrified a number of influential citizens who believed the Republic was all but dead. Perhaps they were jolted into action when Caesar became dictator for life as it was a completely unconstitutional act. As well as being concerned about Caesar’s power and influence, the Senate was greatly offended by his arrogance and vanity.

The would-be assassins believed they had to kill Caesar for the good of the Republic but also knew failure meant certain death as they would be branded traitors. The conspirators included friends of Pompey, one-time allies of Caesar who disagreed with his policies and idealists that believed the assassination was necessary to preserve what remained of the Roman Republic.

There were an estimated 60 people involved in the plot, but historians have identified Brutus, Decimus, Gaius Trebonius and Gaius Cassius Linginus as the ringleaders. Brutus is often deemed to be the main conspirator and is compared to Judas because he was apparently close to Caesar. In reality, Brutus was never friends with Caesar and actually fought with the forces of Pompey against him. Caesar forgave him, but clearly, Brutus wanted Caesar dead. The real traitor is Decimus who had spent years fighting by Caesar’s side in Gaul and dined with the dictator the night before the murder.

The conspirators probably began meeting in 45 BC; initially in small groups to avoid detection. Caesar arrogantly dismissed his Spanish guard in October of that year in the belief that no one would dare attack him. The plotters knew their plan had to be completed in haste as March approached because Caesar was due to leave the city on March 18, 44 BC. After considerable debate, the conspirators decided to attack during a session of the Senate at the Theater of Pompey on March 15. They also chose to bring 8-inch daggers instead of swords as they were easier to hide beneath their togas. Caesar’s brief reign as dictator was about to come to a bloody end.

The Ides of March

Much is made of the omens surrounding the death of Caesar. One of the most famous is the warning from the soothsayer, Spurinna. At the festival of Lupercalia on February 15, 44 BC, Spurinna outlined his concern for the dictator after Caesar sacrificed a bull with no heart. The following day, he oversaw another sacrifice, but the animal had a deformed liver. The soothsayer believed it was a sure portent of doom and warned Caesar that his life was in danger for a period of 30 days which ended on March 15.

In reality, all Spurinna did was accurately outline the dangerous political climate in Rome. Caesar had many enemies, and they wanted him dead before he left Rome on March 18. Nothing happened until the morning of March 15 when Caesar’s wife, Calpurnia, told him that she had a dream where she held his bloodied body. Caesar also had a dream that he was flying in the air and held hands with Jupiter. When Spurinna oversaw yet another sacrifice that spelled doom, Caesar agreed to postpone the meeting. However, Decimus arrived and persuaded the dictator to come to the Temple to announce the postponement in person.

A slave came to Caesar’s house with a warning, but the dictator had already left. He was handed a scroll outlining details of the plot on the way to the Senate, but did not read it. Mark Antony was warned of a plot the night before and tried to reach Caesar only to get delayed on the way. The meeting was held in the Curia behind the Temple of Pompey and Caesar entered the room and climbed on his golden throne.

Plutarch wrote that Caesar was handed a petition by Lucius Tullius Cimber who wanted his exiled brother recalled to Rome. The other plotters gathered around to offer support, but Caesar waved him away. However, Cimber grabbed the dictator’s shoulders and pulled down his tunic. A surprised Caesar reportedly said: “Why, this is violence!” Before he knew what was happening, a man named Servilius Casca had stabbed him.

The end came swiftly as a number of other men attacked Caesar with their daggers. He was stabbed a total of 23 times, but only one of the blows was fatal. It was by no means a clean assassination as a number of the senators accidentally stabbed one another in the melee. As he was dying, Caesar reportedly said “You, too, my child!” to Brutus and the remaining senators fled the scene as confusion reigned. Mark Antony prevented plans to throw Caesar’s corpse in the Tiber and confiscate his property.

The conspirators had no idea what to do after killing Caesar as they had no plan of action. In fact, they reportedly asked Cicero what they should do next since they had given no thought to the consequences of the murder. Brutus spoke from a platform at the foot of the Capitoline Hill but failed to calm the angry crowd. The people of Rome apparently wept as Caesar’s body was brought home and on March 20, the funeral procession took place as the dictator was burned on a pyre.

The real problem for the conspirators was that they failed to win over the army. The soldiers were expecting to go to war and wanted a large payout from whoever was going to lead Rome. Brutus and co. were unable to appease the soldiers in time and had to flee the city. According to Caesar’s will, Octavian was left in charge, and he defeated the forces of Brutus and Cassius at the Battle of Philippa.