Today in History: Andrew Jackson Wins a Duel in Kentucky (1806) 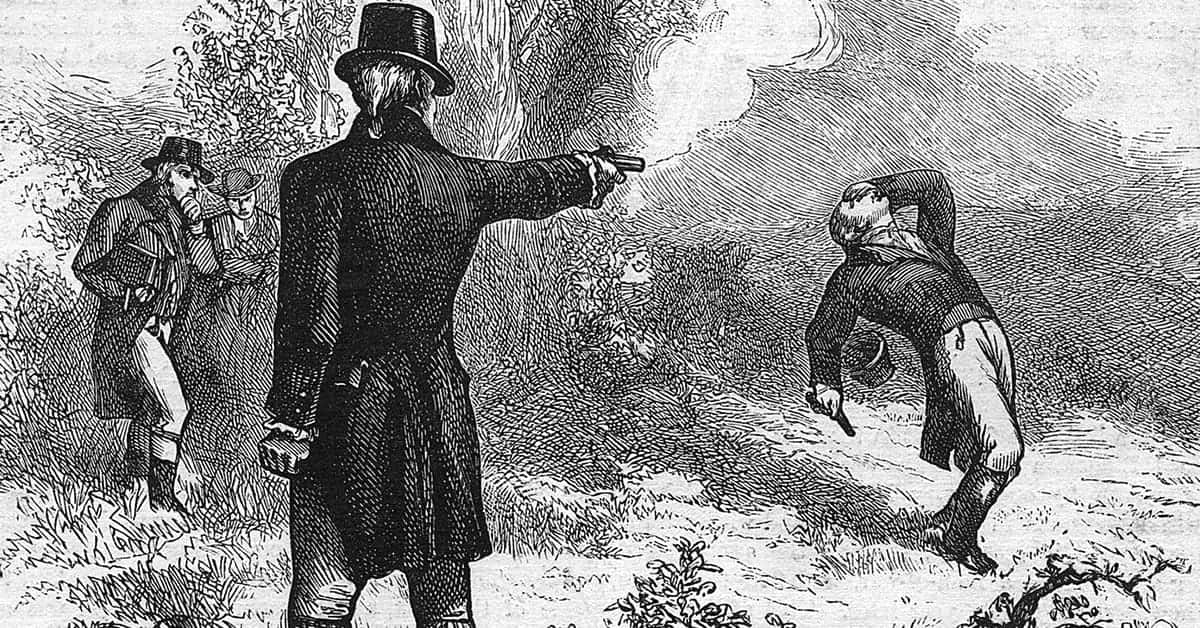 Today in History: Andrew Jackson Wins a Duel in Kentucky (1806)

Duels were fairly commonplace in early America, and several of our earliest politicians were involved in duels to the death. Perhaps the most famous of these is Aaron Burr, who famously dueled Alexander Hamilton while Burr was Vice President. According to several sources, the last truly notable American duel to the death was between United States Senator David Broderick and former Chief justice David Terry in 1859. The fight happened after years of fighting over the legality of slavery.

Despite what seems to be an unusual popularity of duels in American politics in the early 19th century, dueling was illegal in most places. However, it seems as if conviction of the winners of a duel was quite hard (if it was tried at all). Neither Burr nor Terry (the winner of the Terry-Broderick duel) were ever convicted of basically murdering their rivals.

In 1806, future President of the United States Andrew Jackson would participate in his third duel. From all accounts, Jackson was not an easy man to get along with, which explains why he had to duel to the death so many times.

Charles Dickinson was an American attorney, who also happened to be an accomplished duelist. As an expert marksman, he was the type of guy you wanted to stay away from. He also seemed to have quite the temper, and had no compunction about saying rude things or arguing with someone even in a public space (something that was considered quite rude, even more so in that era).

In 1806, Andrew Jackson challenged Charles Dickinson to a duel over the results of a bet placed on a horse race in 1805. The initial insult came from an anonymous friend of Andrew Jackson, who disparaged the book-keeping of Captain Joseph Erwin, Dickinson’s father-in-law. Dickinson was outraged, and began to trade insults with the future president (though apparently not the ‘friend of Jackson’ who had kicked off the whole situation) for the next year.

Dickinson struck first in the war of words by calling Jackson a “coward and an equivocator.” The rivalry between Jackson and Dickinson would intensify as even associates of the two fought over political ambition. John Coffee, who was a friend of Jackson’s, dueled one of Dickinson’s friends over a political rivalry in early 1805.

Another friend of Andrew Jackson got drunk on evening and told a very lurid story about the bet that was handled by Erwin, which led to Dickinson believing that Andrew Jackson was telling rude and untrue tales about his father-in-law. After several insults back and forth, Dickinson published an attack in a local newspaper calling Jackson a “Poltroon and a coward.” A Poltroon, according to a dictionary, is another term for a coward. So, in effect Dickinson called Jackson a “coward and a coward.”

That is what caused Jackson to seek “satisfaction.”

On May 30th, 1806, the two met in a duel to the death. They had to meet in Kentucky as dueling was illegal in Tennessee. Under the rules of dueling, one of the men would shoot, and then the other would shoot back. Dickinson was allowed to shoot first, and in fact hit Jackson in the chest. He would carry the bullet in his chest for the rest of his life.

Jackson’s shot hit Dickinson in the chest as well, but Charles Dickinson bled to death, giving Jackson his third dueling win, and allowing him to survive to become the 7th President of the United States in 1829.