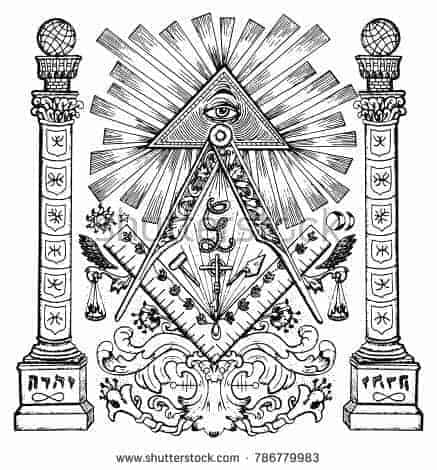 The World Wars evoke imagery of brave and world-weary soldiers. True patriots, ready for battle at a moment’s notice, all for the sake of life, of liberty, and the pursuit of happiness. More than any other war, the World Wars are glorified despite the sheer violence and the depravity experienced by so much of humankind. These wars personify the fight for good and evil; there was a clear and distinguished line between the “good” guys and the “bad” guys.

Guns, machinery, and master strategists all contributed to our visions of these wars, but what of less mechanical and physical means were both allied and axis forces operating with? It is easy to assume the tragedies were all man-made, but is it possible higher, more menacing, powers were at work to orchestrate some of the greatest losses of human life the world has ever seen? Many major political and military contributors found themselves dabbling less in tried and true military strategy and instead of reaching for less corporeal means of victory. Under these dire and dangerous times, secret societies and the occult flourished.

World War I began with the assassination of Archduke Franz Ferdinand on June 14th, 1914. Ferdinand was heir to the Austro-Hungarian Empire. While he and his wife Archduchess Sofia were on an official visit, their car pulled through crowds of jubilant people. Suddenly, a group of young extremists threw a car bomb, narrowly missing the Archduke and his wife, and instead of injuring twenty bystanders. While this specific incident left the royal family unscathed, a wrong turn from the driver of the car found the family face to face with the remaining assassins, ultimately leading to one of the most world-changing assassinations to have ever taken place.

This particular group of extremists belonged to a secret society, a group of Serbian nationalists who formed The Order of the Black Hand. When the case was brought to court, the argument on behalf of the young nationalist assassins was that they had not acted in a solitary act of defiance against their government, but was acting on behalf of a larger network of conspirators determined to destroy the social and financial structure of the country.

It was commonly known that the Austrian Emperor Franz Josef I was exceptionally paranoid about secret societies and the occult; his paranoia stemmed from both the tragic death of his wife who had been stabbed to death by a member of a secret society in 1898. Franz Josef himself was the target of an assassination effort by The Order of the Black Hand. It was his belief that the French Freemasons were devising ways to begin a war between Austria-Hungary and Russia.

Franz Josef’s sentiments were shared by French occultist Dr. Gerard Encausse, who had deep ties to the Russian Royal family. Encausse believed that a financial syndicate with Freemason and Carbonari ties, both secret societies, were responsible for the majority of political upheavals Europe and Russia had recently been experiencing. He believed this syndicate was attempting to gain control of the world’s gold reserves and cause war for the largest European powers in order to disrupt political factions.

The connections between Freemasons, the Order of the Black Hand, and assassination attempts and successes seem to paint a clear picture of the greedy motives of certain individuals. Many strings were being pulled by forces on the periphery of politics. Shadowy figures seemed entrenched in the very sources of the great war to come, although history books were later glossed over the secret society connections, and by extent occultism, that contributed to so many fatalities and war-torn cities. The Freemasons were of course initially established as a way to continue occult practices yet still retain an air of respectability.

When word of Franz Ferdinand’s death reached Kaiser Wilhelm II of Germany, the Kaiser immediately offered a hand of support and relief, declaring it would demolish the Order of the Black Hand. Thus, the first allegiance was born, leading to a war with the Serbians. When Franz Josef officially declared war on Serbia on July 18th, 1913, Russia began mobilizing its forces to come to the aid of its ally Serbia. Germany threatened Russia with its own mobilization if Russia did not back down, but the Russian troops refused, bringing the total number of key players to four. Looking back on history, it is amazing how such a deeply dangerous conflict arose from an occult practicing Serbian secret society.

The Kaiser himself was related to most of European royalty via his Grandmother Queen Victoria. Kaiser believed he saw firsthand the impact the Freemasons had on European conflicts and financial upheavals. His conspiratorial beliefs shaped how he handled both his foreign and domestic affairs, believing these less savory interests were in the business to take him down entirely. His fears did come to fruition when his reign became threatened by the military, and Wilhelm saw himself become little more than a puppet to the German military. The German people were so enraged at Germany’s failures during World War I, the Kaiser abdicated himself from the German throne and personally saw himself to his own exile in neutral Holland. This abdication led to the end of a 400-year-old reign of the Hohenzollern royal dynasty.

Wilhelm’s library in Holland contained many books containing information about the occult, spiritualism, and rituals. Wilhelm had always been fascinated by Freemasonry and Luciferianism, however, his exile appeared to catapult him into an almost obsessive collector of information regarding secret societies. Although he was fascinated with the subject matter, he condemned the many civil servants he came across that participated in occult activities or had secret society ties.

Even his cousin, the Russian Czar, shared Wilhelm’s interests and ideologies, and the Czar and his wife frequently patronized Rasputin and his claims of magical ability. Wilhelm continued to assert his views publicly, including those of German superiority he supposedly found while researching the occult. His findings would mark the beginning of Adolph Hitler’s obsession with a German master race.

Wilhelm’s interests were not only shared and propagated by his own bloodline but by military leaders of his own country as well. Wilhelm’s esoteric interests garnered the attention of Chief of Staff of the German Army, General Helmuth Von Moltke, setting forth a long history of German military involvement in the occult. Von Moltke met a spiritual mentor by the name of Rudolf Steiner, who is best known for his Waldorf teaching methods in schools all across the world. Although the general met some opposition from fellow staff about his involvement with Steiner and the occult, it did not stop the general or his wife from taking occult-related trips with Steiner, regarding everything from the lost city of Atlantis to reincarnation.

Steiner was also a firm believer in secret societies’ sway over political matters, believing them to be so corrupt and Satanic in nature, their end goal was total human enslavement. By 1916 and 1917, Steiner entered the political arena, and during a talk in Switzerland, he spoke of the corrupt powers that aimed to dismantle society as it was known, and the evil cabal residing in the English-speaking United States and Britain sought dominance over Germany and Hungaria. His fears, along with those of the ex-kaiser Wilhelm, Austrian Emperor Josef, and Dr. Gerard Encausse, were validated by the end of the first World War. Both monarchies of the Austro-Hungarian and German empire were overthrown, while the predicted collapse of the Russian Empire by occultist C.G. Harrison nearly a decade before came to fruition. Steiner’s Swiss lectures were later being compiled into a transcript, The Karma of Untruthfulness: Secret Societies, the Media, and Preparations for the Great War.

Steiner also sought to warn others about attacks on personal freedom. He prophesied Anglo-American materialism would change world views, leading to a degradation of human freedom and spiritual enlightenment. This echoes fears very similar to those shared by conspiracy theorists of our current time regarding The Illuminati. However, it was not just idle conspiracy theories for Steiner or Von Moltke. Von Moltke was a powerful military leader who held significant influence over the affairs and safety of Germany, impacting decisions held during war times. Von Moltke’s involvement with Steiner, who politicized his ideologies, continued to solidify Germany’s place with occult practice.

Back in the United States, famous Americans had their own take on exactly how the Great War came to be. Henry Ford, the founder of Ford Motor Company, believed with no doubt that a hidden Jewish cabal of superpowers was to blame for such human travesty, a sentiment not uncommonly held, particularly among politicians and military leaders who were involved in the war. Antisemitism had existed long before the late 18th and early 19th centuries, but it found particular support from Winston Churchill, who firmly believed “Judeo Freemasons” were responsible for the meddling and subsequent destruction of so many once-powerful nations.

The concept of deeply rooted and Satanic cabals was pervasive during World War I. Legitimate ties to secret societies, particularly that of the Order of the Black Hand in Serbia, are reputable. Other accusations regarding French Freemasonry involvement is harder to validate, but many key players pieced together puzzle pieces that at least make it an interesting facet of history, and certainly give us a much more exciting insight into the paranoia-based motives various country’s leaders had during such tumultuous times.