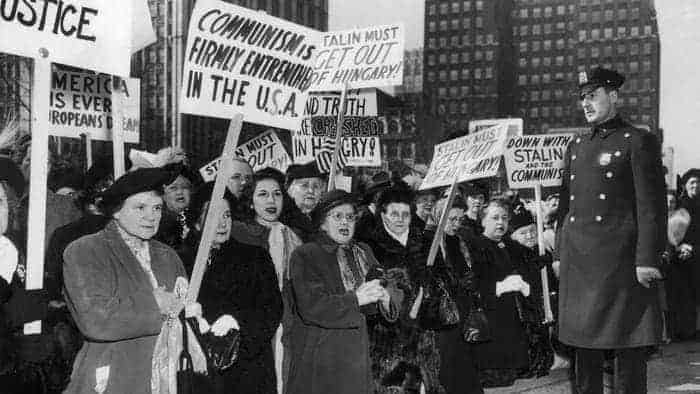 In the years following the Second World War, the most important attribute for an American was to demonstrate loyalty. President Harry S. Truman signed an Executive Order on March 21, 1947, that required all federal civil service employees to undergo loyalty screenings. The purpose was to find any civil servants that may be willing or planning to alter the United States government by unconstitutional means. For the President, he wanted to ensure that no communist spies were working for the US government. Almost immediately, the Executive Order’s intent took on a new meaning.

Since the First World War, Americans had been concerned about Russians infiltrating the US government. Labor unions and workers’ advocates were the first widespread groups to be accused of being puppets of the Russian government. When race riots erupted in cities throughout the country in 1919, civil rights groups formed and activists began demanding more from the federal government. Throughout the first two decades of the 20th century, activists petitioned Congress and the President to pass a national anti-lynching law. Now both advocates for workers’ rights and civil rights were classified as subversive organizations seeking to do harm to the US government.

Any person or group that spoke out against the US government or capitalism became a communist, fascist, or anarchist in the court of public opinion. Even after the failure of the Palmer Raids, many Americans supported the deportation of any foreign-born person that might possibly be a spy or saboteur. When the United States entered the Second World War as an ally of Joseph Stalin’s Soviet Union, the war effort subdued the search of subversive organizations and their members.

The conflict over what to do with Germany at the conclusion of the Second World War created a rift between the United States and the Soviet Union. Throughout the war, the United States ignored the atrocities committed by the Soviet Union at the expense of defeating Germany and Japan. At the end of the war, the Soviet Union rejected the Marshall Plan that would rebuild a war-torn Europe. In doing so, Europe was divided essentially into a Western Bloc and an Eastern Bloc. The Western Bloc followed the ideals established through republicanism and liberty, while the Eastern Bloc followed the idea of a communist form of government. In America, all things supported by the Eastern Bloc became bad and needed to be hated.

The genius of the McCarthy era was the use of new media outlets. Television permitted the broadcasting of live and recorded images. Viewers could watch the nightly news and its reports on the horrors of possible nuclear attack and the work of Soviet espionage. This was very different from newspapers that could only show stills. Campaigns warning Americans of the harms of subversive activities flooded the news outlets and dramatically influenced public opinion.

The House Committee on Un-American Activities (HUAC) was formed in 1938 under a different name. Throughout the Second World War, the Committee investigated the activities of Nazi German-Americans. After the war, the Committee shifted its focus to groups associated with Communism. As with the Palmer Raids, all it took was one anonymous phone call that a person was a Soviet spy or supported Communism to spark an investigation. Americans turned on each other. This most famously played out on TV during the investigation into Hollywood and its supposed support of the Communist Party.

The fear of a Communist plot to overtake the United States was widespread. The American Legion was crucial in lobbying for the passage of the GI Bill in 1947. This powerful group of veterans also openly supported an anti-communist stance in the public sector. The American Legion membership and militant women’s groups such as the American Public Relations Forum and the Minute Women of the USA, organized letter-writing campaigns. Tens of thousands of housewives and veterans wrote letters professing that public health programs such as vaccinations, mental health, and fluoridation of water were actually communist plots to brainwash and poison Americans.

Perhaps the most dramatic of the McCarthy-era witch hunts occurred in Hollywood. Over several months the House Un-American Activities Committee held hearings questioning the loyalty of screenwriters, actors, directors, and producers. Those in Hollywood that supported McCarthy’s tactics wrote letters professing the need to clean up the entertainment industry. Others wrote letters declaring their loyalty to American ideals and their support to get communist supporters out of Hollywood.

Individuals that were questioned by the House Un-American Activities Committee were blacklisted. This meant that they could no longer work in Hollywood. Some prominent people suffered hardships due to the accusations brought against them. Others changed their names and identities in order to maintain some sort of employment in Hollywood. Many simply left their careers, moving their families to midwestern cities where the spotlight was not so bright.

Television was a catalyst in reshaping public opinion. A new television network, the American Broadcasting Company, aired live coverage of the famed Army-McCarthy hearings from April 22 to June 17, 1954. The US Senate’s Subcommittee on Investigations was holding hearings to investigate accusations that McCarthy had received special treatment in his quest to eradicate un-American behavior. Senator McCarthy’s political aspirations for higher office ended abruptly when he was censured in December 1954. The Joseph McCarthy witch-hunts were over but the damage remained.

Gay men and women were targeted by McCarthy-era witch-hunts. In 1950, homosexuality was classified as a mental disorder that could be reversed through electro-shock therapy. In many states, sex acts between two men or two women was illegal. Individuals who were caught having sex with members of their same gender could be arrested, charged, and imprisoned. Many people viewed gay men and women as degenerates, sexual perverts, and pedophiles. It was also believed that gay men and women were on a quest to convert the young to their perceived subversive way of life.

Until the end of the Second World War, the military had been one of the largest employers for homosexuals. With noted exceptions, for the most part, as long as a person was willing to die for his country, sexual orientation was not a major concern. For gay service members, as long as they were not caught acting on their sexual desires, they could receive an honorable discharge and be entitled to all the benefits of the GI Bill. Many service members took advantage of employment opportunities offered under the GI Bill and began working for the federal government.

Being openly gay was not a viable option in 1950s America. Gay men and women used symbols to identify their sexual orientation. Some placed colored bandanas in their back pockets to state that they were gay. Others lived in city neighborhoods known for a more relaxed and accepting lifestyle. Bars and restaurants placed rainbows in their windows to identify their establishments as friendly place for gay men and women. Such symbols would make it easier to avoid arrest for sexual perversion.

Homosexual males became a target for McCarthy-era fervor. The belief was that homosexuals were dangerous because they were more susceptible to blackmail by communist supporters. The “lavender lads” were deemed a national security risk. It became the goal of McCarthy and his supporters to remove these lads from their posts within the State Department and other federal civil service positions.

Senator McCarthy professed that homosexuality was almost worse than communism. As such, homosexuals had to be removed from their federal positions. This stance gained public support within the anti-communist movement. Anyone that was openly gay or accused of being gay could be arrested, interrogated, and removed from their federal job. Just like the anti-communist measures employed in eliminating communist supporters from Hollywood, McCarthy implemented a guilt-by-association policy. It was not just gay people who were suspicious; it was also people who associated with a suspected gay person as a coworker, friend, or family member.

Homosexuals in particular were viewed as diseased and an invasion against the American way of life. More people were forced to resign from their federal jobs due to their sexual orientation than those charged with anti-communism. Veterans who had earned an honorable discharge from the military could see their discharge changed to dishonorable if they were accused of being a homosexual during the Lavender Scare of the 1950s. Any benefits that they had received through the GI Bill would have to be repaid to the government that charged them with an un-American way of life.

Even after McCarthyism faded, the removal of gay people from federal employment continued. Gay people were formally barred from entering the military until 1995 when President Bill Clinton implemented a “don’t ask, don’t tell” policy. In January 2017, the State Department officially apologized for the Lavender Scare that booted out tens of thousands of federal civil service employees solely for being gay. Much of the ongoing rhetoric surrounding the debate of constitutional protections for the LGBTQ community is rooted in the post-war witch-hunts spearheaded by Joseph McCarthy.