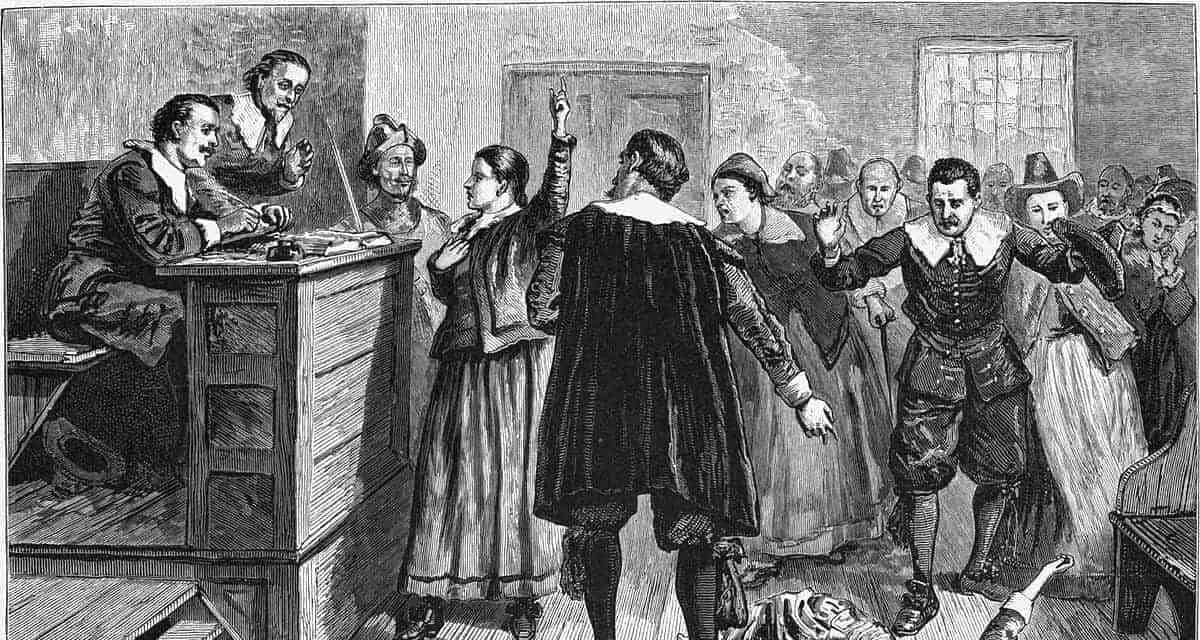 The infamous Salem Witch Trials involved the prosecution of men, women, and children who were accused of witchcraft. They took place in Massachusetts between February 1692 and May 1693 and resulted in 20 executions while another five individuals died in prison. Although there had been 12 executions for witchcraft in Connecticut and Massachusetts during the 17th century, the Salem Witch Trials became famed for the hysteria that surrounded them; along with the appalling miscarriages of justice.

William Stoughton, who became the Chief Justice in charge of the trials, was unquestionably the worst culprit. While other judges were ashamed at what they did after the trial, Stoughton not only defended his actions but seemed proud of them. During the trials, he accepted ‘spectral evidence’ (evidence based on alleged demonic visions) and never admitted that his acceptance of the evidence was a major error.

Overall, Stoughton’s sentences resulted in nine hangings, and there would have been more had Governor William Phips not overruled Stoughton’s sentencing in other cases. Despite his blunders, Stoughton’s reputation did not take a hit, and he served as Governor of the Province of Massachusetts Bay until his death on July 7, 1701.

Stoughton was born in 1631, but his place of birth remains a mystery. He could have been born in England, but his parents were residents of the Massachusetts Bay Colony in 1632 where they lived in Dorchester. He was still a teenager when he graduated with a Degree in Theology from Harvard College in 1650. His goal was to become a Puritan Minister, so he went to England and studied in New College, Oxford. Stoughton was forced to leave England in 1660 when Charles II was restored to the throne and started punishing religious dissenters.

He returned to Massachusetts in 1662 and moved into politics and land development after failing to land a ministerial job. From 1671 to 1687, Stoughton played a prominent role in the colony where he served on the council of assistants for much of this period. He also represented the colony in the New England Confederation for a total 10 years between 1673 and 1686.

Stoughton was careful who he made friends with and knew how to play the game of politics. Joseph Dudley became one of his closest friends, and together, the two men used their political positions to make sure the titles of land they wanted were judicially cleared. This was an important process, and as well as helping Stoughton make money, it also helped him forge ties with prominent individuals in the colony.

In 1692, Stoughton received a royal commission as lieutenant governor of the new Province of Massachusetts Bay. The Governor of the New Province, Sir William Phips, appointed Stoughton as the leader of a special tribunal designed to handle the rash of new witchcraft cases that had gripped Salem. In June 1692, Phips appointed Stoughton as the chief justice of the colonial courts, a decision that Phips would later regret. In a classic case of ‘it’s not what you know, it’s who you know,’ Stoughton became the chief judge and prosecutor in the Salem Witch Trials despite a lack of legal experience. His actions were notorious and became a great source of shame, just not to Stoughton.

In the Absence of Real Evidence, Spectral Evidence Would Do

When it came to the Salem Witch Trials, logic and reason were abandoned as prosecutors did everything in their power to convict the accused. Crowds were baying for blood, and an absence of real evidence wasn’t enough for defendants to walk free. Stoughton changed the game by allowing spectral evidence into his court. This form of evidence is based on dreams and visions with no basis in fact.

Those who testified at the trials could speak freely about how an accused witch’s spirit appeared to them in a dream or a vision (such as a black cat for example). Incredibly, the dream/vision was admitted as evidence. Therefore, the witnesses could say that in the dream, the defendant almost choked them and the court allowed it as evidence of an attack even if the defendant was somewhere else at the time. It was incredibly difficult for anyone to prove their innocence against this backdrop.

Then you had the baffling line of questioning taken by prosecutors. In one memorable case, John Hathorne, who also acted as a judge, didn’t allow a lack of evidence against Bridget Bishop to force him out of his stride. She was accused of bewitching her husband and claimed she knew nothing about it. Then, she said: “I am innocent to a witch; I know not what a witch is.” Hathorne jumped on this answer and asked Bishop how she knew she wasn’t a witch when she didn’t even know what a witch was.

The Hanging Judge Gets Busy

Stoughton was also unconcerned about a lack of evidence and duly found Bishop guilty of witchcraft. He sentenced her to death, and she was hanged on June 10, 1692. The juries also played along in this ghastly charade. Throughout the duration of the Salem Witch Trials, juries routinely returned ‘Guilty’ verdicts even though they knew the defendants didn’t really do what they had been accused of. However, it wasn’t enough to warrant acquittal. In this case, you were guilty unless you could prove otherwise, a task that became almost impossible in the hysterical climate.

Stoughton was not merely content to sign the death warrants of people who were found guilty; he was determined to ensure that every single person who stood before him died. In the case of Rebecca Nurse, a 70-year old woman who was hard of hearing, the jury found fit to return a verdict of ‘Not Guilty.’ The outraged Stoughton told the jury to deliberate again, and when they reconvened, Nurse was found guilty and sentenced to die. On July 12, Stoughton signed her death warrant along with those of Susannah Martin, Sarah Wilds, Sarah Good, and Elizabeth How. He was in his element, and no defendant was free from his tyranny.

Phips Tries to Reign in the Madness

On August 6, 1692, Stoughton was amongst the judge that met and found six defendants guilty of witchcraft. Five of them were hanged within a fortnight, but Elizabeth Proctor escaped the noose because she was pregnant and it was deemed wrong to murder an innocent child for the crimes of its mother. Several more people were hanged in the next few months, but in October, a number of prominent ministers rallied against the use of spectral evidence. Phips disbanded the court on October 29, and a large percentage of those who were jailed received their freedom.

While this should have been the end of the matter, the bloodthirsty Stoughton had other ideas. On January 3, 1693, he ordered the execution of all suspected witches who had escaped the gallows by virtue of their pregnancy. Fortunately, Phips overturned this order, and the women were spared. An irate Stoughton briefly protested and left the bench. If there were any real justice, Stoughton would have paid for his crimes when the Salem Witch Trials ended but instead; he continued to play a prominent role in politics.

King William’s War, which was part of the Nine Year’s War, broke out in 1689 and Stoughton ultimately played a role in responding to the threat to the colony. French and Indian raids damaged Massachusetts Bay which caused Phips to leave his post and oversee the defenses. Stoughton was in charge when Phips was absent, and when Phips had to travel to London to answer misconduct charges in 1694, Stoughton became acting governor in November. Phips died a few months later which meant Stoughton remained in power.

It appears as if he only ever saw himself as a caretaker because Stoughton never allowed himself to get heavily involved in the position, even though he held the role until his death in 1701 barring a short period between 1699 and 1700 when the Earl of Bellomont held the position. Stoughton died at his home in Dorchester having been in poor health for the last year of his life.

He was completely unrepentant to the very end and always claimed that he was acting on the orders of God. While other judges in the Salem Witch Trials at least acknowledged the possibility of arriving at the wrong verdict, Stoughton steadfastly stuck to his guns in the belief that not only were all the accused guilty but also deserving of death.

Even in death, his name remained untarnished, and in 1726, a town was formed in Massachusetts and named ‘Stoughton’ in his honor. Stoughton Hall is also the name of one of the dormitories in Harvard Yard which was constructed in 1698 with the help of a £1,000 gift from the infamous judge. From everything, we know about his conduct during the Salem Witch Trials, Stoughton who only interested in issuing the death penalty because his mind had already been made up about the guilt of the defendant. His attitude represented the very worst of the hysteria that gripped Massachusetts in the 1690s.