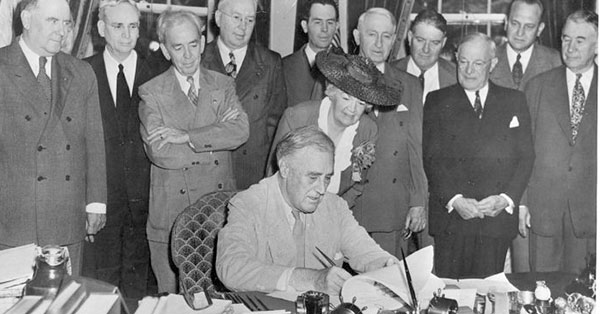 After World War I, there was a lot of debate about the bonuses that returning veterans should receive in the United States. What ended up happening was that each veteran was given a voucher, which they could redeem in 1945, that would give them a certain amount of money. As you might suspect, this did not sit well with veterans; after all, who would want to wait over 20 years for retirement benefits. This method of repayment was even more controversial with the onset of the Great Depression, which led to staggering unemployment even amongst veterans.

It came to a head on July 28, 1932 when almost 50,000 people marched on Washington DC, and violently demanded that their vouchers be redeemed immediately. They were put down by the National Guard, and their demands were rejected. It wasn’t until 1933, that a solution was found. The veterans were offered jobs in the newly formed Civilian Conservation Corps, which took away a lot of their anger.

So it isn’t at all surprising that the veterans who returned from World War II were treated differently. The voucher system was a complete failure, and is likely one of the causes behind why the Great Depression got so bad, especially for veterans (you can’t spend a voucher, after all).

One of the solutions that was eventually used was legislation called the “Servicemen’s Readjustment Act of 1944.” It is better known as the G.I. Bill. Franklin D. Roosevelt signed the G.I. Bill into law on June 22, 1944. The law is perhaps one of the most famous pieces of legislation that was passed in the 20th century.

The G.I. Bill is often given the credit for creating and sustaining the robust middle class that the United States became known for during the second half of the 20th century.

The bill allowed for returning veterans to finish their schooling, through college, with the government footing the bill. It also allowed for low-cost mortgages, low-interest loans for veterans who wanted to start a business, and a full year of unemployment compensation after the veteran’s discharge from the military.

By the time 1956 rolled around, almost 9 million veterans had taken advantage of the G.I. Bill, around 2 million of those used the bill to attend college. The G.I. Bill is considered to have been very successful by historians, and is seen as a major contribution to the economic success of the United States following the end of World War II. It is also seen as one of the contributing factors in the real end of the Great Depression.

The G.I. Bill wasn’t without its faults, however. For-profit colleges, which didn’t really exist in vast numbers before the bill sprang up almost overnight, and took advantage of the Government’s lack of oversight. It would take the government decades to truly oversee where the money from the G.I. Bill was going, and by that time an entire new industry had been created to cheat veterans out of their money for substandard or, in some cases, non-existent education.

Despite those problems, the bill was a success. Compared to the folly that happened after World War I, it was imperative that the US get the benefits for returning soldiers right. If that hadn’t happened, there is no telling where the United States would be today.