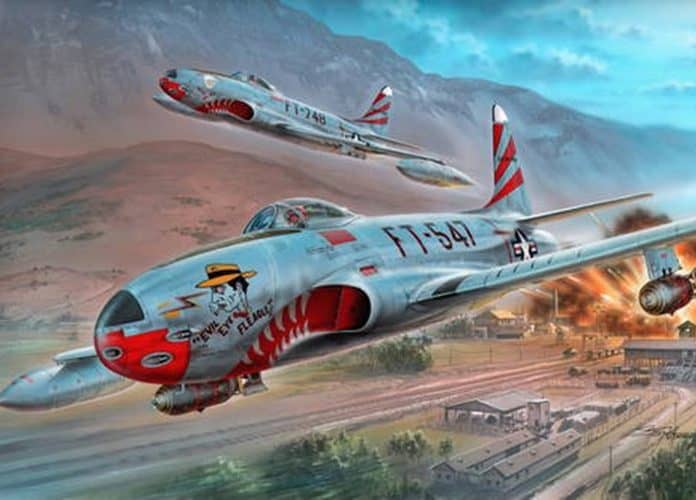 During the Cold War, the two global superpowers often fought each other via proxies. The Soviets bled us with the North Koreans and North Vietnamese, and we returned the favor whenever possible, such as our support for the Afghan Mujahedeen. It was often messy, but it worked. We fought at a remove in other people’s homes, but so long as they refrained from attacking us on US soil, and we refrained from attacking them on Soviet soil, both sides were willing to put up with a lot of from the other. However, there was an exception to the no-direct-attack-on-each-other’s-soil in 1950, when American warplanes attacked a Soviet airfield near Vladivostok. Following are forty things about that and other fascinating but lesser known events from history.

It was the afternoon of October 8th, 1950, during the Korean War. Two American Lockheed F-80 Shooting Stars, flown by pilots Alton Quanbeck and his wingman Al Deifendorf, were flying a mission over North Korea. Their target: Chongjin airfield, on the far northeast of North Korea, 40 miles south of China, and 60 miles southwest of the Soviet border. It was an overcast day, and skimming the top of the clouds at 37,000 feet, they armed their .50 caliber machine guns in preparation for action, and began their descent.

At 10,000 feet, they spotted a small hole through the clouds, and plunging through the opening they found themselves over a broad river valley with mountains to each side. Following the river, the proceeded southwest, in a heading they thought would take them away from Soviet and Chinese borders. Unfortunately, they had strayed into Soviet airspace. That was bad enough, but then things got worse when they bombed a Soviet airfield on Soviet soil.