Sherman's Other March Was A Lesser Known, Vengeful Attack on South Carolina 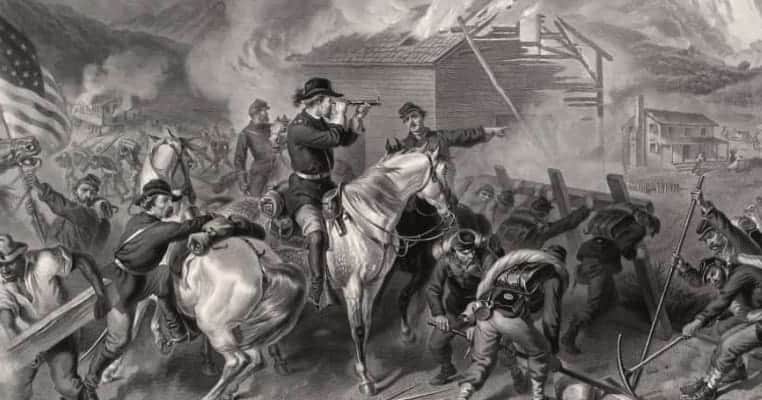 Sherman’s Other March Was A Lesser Known, Vengeful Attack on South Carolina

Civil War general, William Tecumseh Sherman, is best known in popular culture for his march through Georgia in late 1864, living off the land while wreaking havoc and driving home the hopelessness of the Confederacy’s cause. It enshrined Sherman as a Union hero and early practitioner of total war while also cementing his place as a villain in the minds of Southerners. However, the march through Georgia was not Sherman’s sole rampage through the South. An even more devastating march would take place in early 1865, when Sherman led his men through South Carolina – a state blamed by many for having started the Civil War.

If pre-Civil War America had a problem child of a state, it was South Carolina. Constantly instigating, threatening to secede, and vowing violence upon those who spoke ill of slavery – a South Carolina Congressman nearly caned an abolitionist Senator to death inside the Senate, and became a state hero – Palmetto State politicians gained reputations as firebrands. Decades before leaving the Union in 1860, South Carolina had threatened to secede in the early 1830s during what came to be known as the Nullification Crisis. Things simmered down only after then-president Andrew Jackson vowed to march into the state and hang people left and right.

There was no Andrew Jackson around in 1860, and soon after Abraham Lincoln won that year’s presidential election, South Carolina’s General Assembly declared the Republican’s victory a “hostile act”, and called a convention to consider secession. The convention’s delegates voted unanimously to secede, and South Carolina became the first slave state to leave the Union. The “Declaration of the Immediate Cause Which Induce and Justify the Secession of South Carolina From the Federal Union” left little doubt about why the state was leaving: slavery. It read in relevant part:

“We affirm that these ends for which this Government was instituted have been defeated, and the Government itself has been made destructive of them by the action of the non-slaveholding States. Those States have assumed the right of deciding upon the propriety of our domestic institutions; and have denied the rights of property established in fifteen of the States and recognized by the Constitution; they have denounced as sinful the institution of slavery; they have permitted open establishment among them of societies, whose avowed object is to disturb the peace and to eloign the property of the citizens of other States. They have encouraged and assisted thousands of our slaves to leave their homes; and those who remain, have been incited by emissaries, books and pictures to servile insurrection.”

Four years later, the resultant Civil War was going badly for the south, with Union armies pressing ever deeper into the Confederacy. As 1864 turned into 1865, Sherman had finished leading a Union army through Georgia, devastating the state as it went along. Most of Sherman’s men would probably have preferred to be back home, going about the their daily lives and peaceful pursuits. But if there was no getting around their having to be somewhere other than home, wreaking havoc, despoiling the country, and tearing up and burning stuff, most would probably have preferred that such a somewhere be South Carolina. They would get that opportunity soon enough.

After four years of a terrible war that had been kicked off by South Carolina’s secession – and whose first shot had been fired in Charleston, SC, to the cheers of South Carolinian spectators – most Northerners nursed a deep hatred for the Palmetto State. That went double for Union soldiers, who bore the brunt of the ensuing war. By the war’s final year, most Yankee soldiers relished the opportunity to visit that state for a reckoning, and drive home to its residents that war was no game.

Sherman and His Men Had it In For South Carolina

Sherman’s march through Georgia ended on December 21st, 1864, with the capture of Savannah. It capped a month long campaign, in which 62,000 Union troops had marched out of Atlanta, leaving it a smoldering ruin behind them. They then divided into two columns, abandoned their supply lines and plunged into the Peach State. As Sherman put it, his aim was to “make Georgia howl“, and howl it did. The Union forces advanced along a 60-mile front, wrecking military targets along the way, and destroying industry and infrastructure, while living off the land and looting civilian property.

It was a stunning demonstration that the Confederacy had been reduced to a hollow shell, incapable of protecting its heartland or citizens from enemy depredations. Once Savannah fell, the Union army’s general-in-chief, Ulysses S. Grant, wanted Sherman and his men to board ship and join him in Virginia, to help seal the fate of Robert E. Lee’s Confederate forces there. Sherman countered with a better idea: instead of sail north to Virginia, why not march there, through the Carolinas, and wreck South Carolina – birthplace of the secession and war – while he was at it? After all, the recently concluded march through Georgia had demonstrated that a Union army could march where it pleased in the Confederacy.

Grant was persuaded, and in late January of 1865, about 60,000 Yankees began the march into South Carolina. Many in the Confederacy had anticipated that. As one Southern diarist put it “Georgia has been desolated. They are preparing to hurl destruction upon the State they hate most of all, and Sherman the brute avows his intention of converting South Carolina into a wilderness“. Some southerners had less sympathy for the Palmetto State, and as the Yankees crossed the state line into South Carolina, some Georgians, eager to share their misery, asked Sherman’s men to treat South Carolina like they had Georgia. After all, South Carolinians had started the war, and if Georgia was to suffer, it was only fair that the war’s instigators should suffer as well.

Sherman’s men needed no urging. While in Georgia, they had behaved as if they were out on a lark. The Yankees despoiled the countryside and visited destruction upon the locals in a nearly light hearted manner, resembling nothing more than schoolboys – albeit deadly dangerous schoolboys – let loose to engage in youthful high jinx. They had engaged in widespread vandalism and wrought widespread devastation, but did so in a fun filled (to them) atmosphere, unaccompanied by widespread malice or particular hatred towards their victims.

Things were different once they crossed the state line into South Carolina, and many of the march’s participants noted how a change in attitude descended upon Sherman’s men once they entered the “lair of secession”. Many of them might have gone about wrecking Georgia light-heartedly, but when it came to South Carolina, they entered that state with a grim determination that it should pay. They went about making it pay with plenty of malice aforethought.

As Sherman set foot in South Carolina, his 60,000 hardened veterans were faced with 20,000 Confederates, most of them poorly trained boys and old men. The Union commander saw poetic justice in what was about to happen to the state that had seceded first, and that had been the site of the war’s first shot. It was an attitude shared by his men. As Sherman wrote: “The whole army is burning with an insatiable desire to wreak vengeance upon South Carolina. I almost tremble at her fate, but feel that she deserves all that seems in store for her“.

Sherman divided his army into two main wings, both of which went about the tasks of wrecking and burning with a will far exceeding anything exhibited in Georgia. Railroads and other infrastructure deemed of any military value were demolished, and residents went hungry after losing their winter stores to Union foragers. Outright murder and rape were rare, but civilians had their property plundered and their valuables stolen, women were humiliated, and the gratuitous destruction and burning of homes – particularly those of the well to do planters – was widespread.

An obvious target for the Yankees’ wrath was Charleston, site of the Fort Sumter bombardment that had kicked off the war. Sherman feinted with his right wing towards Charleston, while feinting with the left towards Augusta, the site of important arms and munitions factories. That juked the Confederate defenders under general P.G.T. Beauregard into concentrating at Charleston and Augusta. Once that was accomplished, Sherman brought his wings back together, and marched straight north to the state’s capitol, Columbia.

Columbia was protected by natural barriers of swamps and rivers, and the roads leading to the city, inundated by heavy winter rains, were thought to be impassable. Sherman’s men took the obstacles in stride, throwing pontoon bridges across rivers and creeks, wading through swamps, and felling trees by the thousands for logs with which to corduroy the muddy roads. They averaged a dozen miles a day, leading an awed Confederate general Joseph E. Johnston to remark that “there had been no such army in existence since the days of Julius Caesar“.

Sherman captured Columbia on February 17th, and that night, the city went up in flames, in a conflagration that destroyed its center. The burning of Columbia has been a controversial whodunit ever since. Southerners naturally blamed Sherman, but he cast the blame on the city’s defenders for having left burning cotton bales in the streets when they left, a wind that fanned the flames, and the locals who foolishly gave his troops alcohol. While declining responsibility, Sherman made it clear then and thereafter that he felt little sympathy for the city’s fate. Columbia was not the only South Carolinian town put to the torch along Sherman’s path – just the biggest one. Towns such as Orangeburg, Barnwell, and sundry smaller communities, also suffered, as the war came to South Carolina with a vengeance. The army’s rough hand did not soften until it crossed into North Carolina, at which point Sherman ordered his men to treat it less vindictively than they had treated the “lair of secession”.

Wikipedia – Campaign of the Carolinas