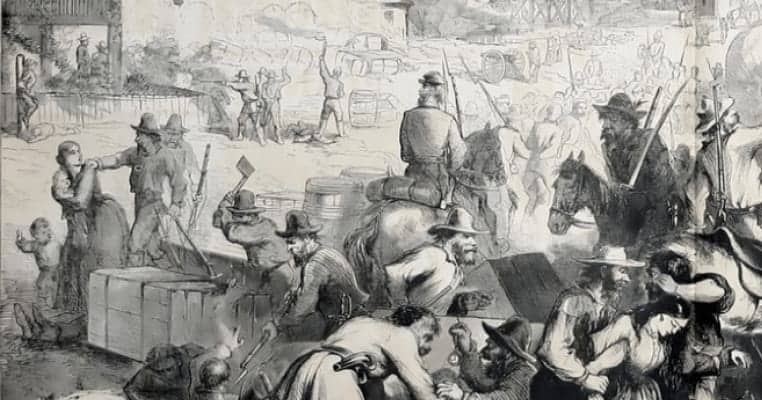 In 1877, a cook in Arizona served Frank Stilwell (1856 – 188) tea instead of coffee, so Stilwell shot him dead. In 1879, he staked a claim and worked a mine in Mojave, Arizona, and got into an argument with another miner over claim-jumping. Stilwell ended the argument by grabbing a rock and smashing his rival’s face until he was dead. He was arrested for murder, but charges were dropped for lack of evidence.

In 1881, Stilwell was hired as a Cochise County sheriff’s deputy, but was canned for “accounting irregularities”. Soon thereafter, he robbed a stagecoach near Tombstone, Arizona, and was tracked down and arrested by lawmen Wyatt and Virgil Earp. Stilwell produced alibi witnesses, and the charges were dropped for lack of evidence. The Earps, in their capacity as US Marshals, then charged Stillwell with the federal crime of interference with a mail carrier. It created a perception that Stillwell was being persecuted, and led soon thereafter to the assassination of Wyatt’s brother, Morgan Earp.

Stillwell was seen fleeing the scene of Morgan Earp’s shooting, and Wyatt Earp formed a posse to hunt the suspects. Soon thereafter, Wyattlearned that Stillwell planned to murder his other brother, Virgil, in Tucson when the train carrying him and Morgan’s coffin to California stopped there. Wyatt formed an escort to accompany Virgil, and on March 20th, 1882, spotted Stillwell and two associates waiting in ambush near Tucson’s train station.

Stillwell and his friends ran for their lives when they spotted Wyatt, but Stillwell stumbled. By the time he got back on his feet, Wyatt Earp was upon him. “I ran straight for Stilwell,” he later recounted. “It was he who killed my brother. What a coward he was. He couldn’t shoot when I came near him. He stood there helpless and trembling for his life. As I rushed upon him he put out his hands and clutched at my shotgun. I let go both barrels, and he tumbled down dead and mangled at my feet.”

History Extra – How wild was the Wild West?

The Grunge – The Crazy Real-Life Story of John Wesley Hardin