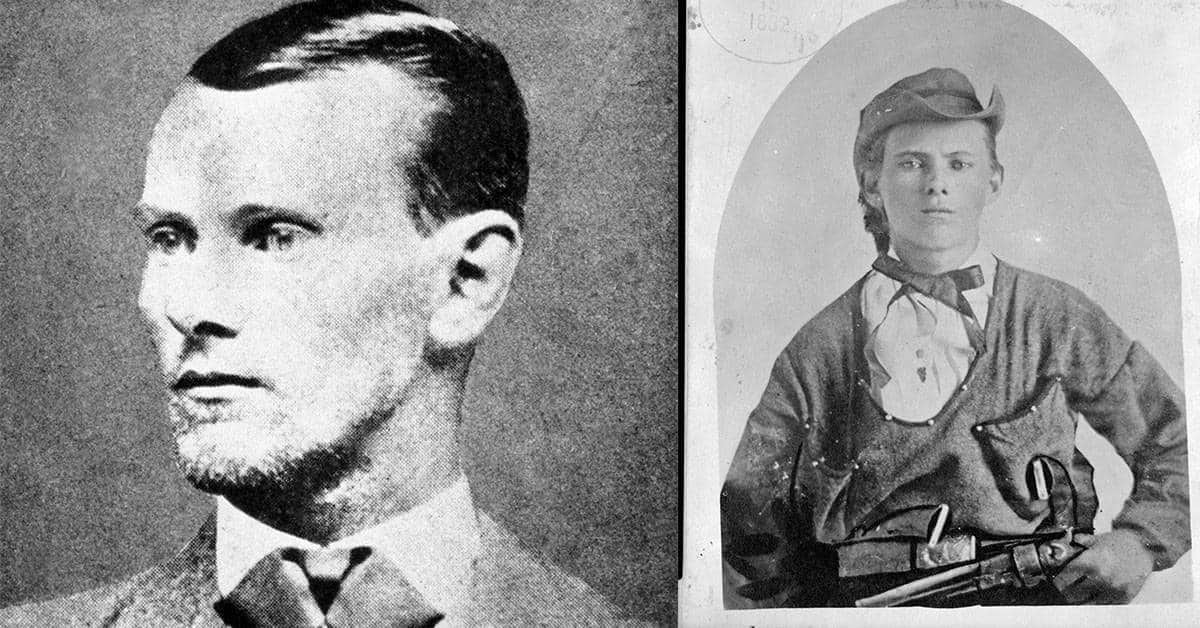 Despite the fact that he was a thief and a cold-blooded killer, Jesse James enjoyed something of a ‘folk hero’ status in certain parts of the Old West. According to legend, along with his group of fellow bandits; the James-Younger Gang, he gave money from his robberies to the poor. In fact, there is no evidence whatsoever that he had a Robin Hood complex. Violence was part and parcel of his adult life, and it is no surprise that he died by the gun at a young age. However, the way he died was a little surprising. Normally, outlaws died at the hands of the police or a rival gang. In James’ case, one of his own men shot him from behind.

Son of a Preacher Man

On September 5, 1947, Jesse James was born in Clay County, Missouri. His father, Robert, was a Baptist minister and died in 1850 after falling ill upon his return from a gold mining expedition in California. James’ mother, Zerelda, now had three kids to feed and no source of income. She tried to set this issue straight by marrying an older man in 1852, but he didn’t want the children so Jesse, his brother Frank, and sister Susan, were forced to live with another family.

Zerelda left her second husband after a short period and returned to Missouri to be with her kids. She married once again in 1855 and had four more children with Dr. Reuben Samuel; all seven kids lived on the family farm. Throughout the criminal careers of Jesse and Frank, their mother always stood by their side and defended them.

As Missouri was a border state during the U.S. Civil War, it was the scene of guerilla warfare from both sides. The James-Samuel family was on the side of the Confederacy as Clay County was predominantly pro-South and was actually called Little Dixie. While 10% of Missouri’s population was slaves, the figure was as high as 25% in Clay County.

Both the Union and the Confederates were guilty of atrocities such as torture and murder, and Frank James joined a pro-secession group and fought at the Battle of Wilson’s Creek in 1861. He was forced to return home due to illness. In 1863, Frank was identified as a member of a Confederate Guerilla group and Union soldiers came to the James-Samuel farm searching for him. They hung Samuel from a tree (he survived) and legend has it that they whipped Jesse. In August, Frank was part of a raid on Lawrence, Kansas that resulted in the deaths of 200 people.

Jesse and Frank joined a group led by William Anderson and were involved in the Centralia, Missouri raid in September 1864 that resulted in the deaths of over 120 Union soldiers and Federal troops. In May 1865, Jesse was shot through the lung during a fight with Union soldiers near Lexington. His cousin, Zerelda Simms, nursed him back to health and the two would marry in 1874. After the war, the James brothers continued to keep in contact, and, along with Archie Clement, they made the transition from guerillas in wartime to outlaws in peacetime.

Robberies & The Formation of the James-Younger Gang

On February 13, 1866, a group of gunman stole up to $60,000 from the Clay County Savings Association. It was a fortune at the time (almost $1 million today), and although police did not know who committed the crime, the list of suspects includes the James brothers, Clement, and Cole Younger. A reward was issued for the capture of Clement who was suspected of masterminding the raid.

After two members of Quantrill’s Raiders (Confederate bushwhackers) had been freed in a daring raid in the town of Independence, Missouri on June 13, Jesse and other gang members began a crime spree. The jailer died in the breakout, and he was just one of numerous people to die at the hands of Jesse James and his men. Clement died in a shootout after arriving in the town of Lexington to drive Republican voters away from the polls.

The mayor of Richmond and two lawmen died in another raid in 1867, and the bushwhackers robbed the Nimrod Long bank in Russellville, Kentucky on March 20, 1868. However, it was the beginning of the end of the original group of gang members as several senior bushwhackers were killed, captured or simply fled the group.

Although Jesse was very much on the radar of the police, it was his actions on December 7, 1869, that thrust him into the spotlight. Along with Frank and several other men, Jesse traveled to Gallatin, Missouri and robbed the Davies County Savings Association. Jesse murdered John Sheets, the bank’s cashier, in the mistaken belief that he was Samuel Cox and involved in the death of William Anderson during the Civil War. The murder, along with the fact that Jesse and his men escaped through the middle of a posse, garnered newspaper coverage of the gang’s deeds for the first time.

Thomas Crittenden, the Governor of Missouri, offered a reward for the capture of Jesse and he was publicly declared an outlaw. Jesse was seemingly clever enough to understand the influence of the media at the time and teamed up with a pro-Confederate newspaper editor, John Newman Edwards. Together, the duo managed to paint Jesse as a kind of folk hero and a Southern patriot during the Reconstruction era.

Jesse used the platform provided by Newman and the Kansas City Times to write letters and editorials defending his actions. Jesse started to become more political in his writing and claimed he was proud of the Confederacy; he also showed his disdain for the Republicans. It was through these letters that Newman was able to portray Jesse as a Robin Hood character who was a noble outlaw and a man of the people. In reality, Jesse was nothing of the sort.

By now, the group of outlaws had become the James-Younger gang and consisted of the James brothers and the four Younger brothers; Cole, Jim, John, and Bob along with several former Confederates. The gang took their criminal activities to several states including Iowa, Kansas, Texas, and West Virginia. They robbed stagecoaches, banks and even a fair in Kansas City and performed many of their deeds during the day in front of a crowd.

The gang turned to train robbery and committed several crimes of this nature in 1873 and 1874. For one such theft on July 21, 1873, they wore Ku Klux Klan masks. The James-Younger Gang appeared invincible, but finally, a group of professional crime stoppers was hired to put an end to Jesse James and his crew once and for all.

In early 1874, the famed Pinkerton National Detective Agency was hired by the Adams Express Company to capture the James-Younger Gang. However, as the gang still had the support of many former Confederates, they managed to frustrate their pursuers. One of the Pinkerton agents, Joseph Whicher, was murdered by the group. On March 17, 1874, another agent died at the hands of the gang but not before he killed John Younger.

By now, the head of the agency, Allan Pinkerton, became involved and pursued a vendetta against the James-Younger Gang. On January 25, 1875, he raided the James family farm and threw an incindiary device into the house. It killed Jesse’s half-brother Archie and blew one of his mother’s arms off. Residents were so outraged that a bill was introduced to the state legislature to offer amnesty to the gang; it was narrowly defeated. On April 12, 1875, Daniel Askew was murdered by Jesse or another member of the gang for supposedly helping the Pinkertons. Allan Pinkerton gave up his pursuit of the gang soon afterward.

While the James-Younger Gang was finally free of Pinkerton pursuit, it overreached on September 7, 1876, in a bank robbery that spelled the end of the gang. They targeted the First National Bank of Northfield, Minnesota because they believed it contained $75,000. During the heist, three gang members went inside and demanded that the cashier open the safe, but he refused. Meanwhile, the townspeople heard rumors of a bank robbery (it was 2 pm) and began shooting at the gang members still in the street. Two gang members died in the melee, and all of the surviving Younger brothers were captured a couple of weeks later.

The James brothers escaped and laid low for a few years. However, they could not hide their nature forever, and in 1879, they formed a new gang and started a fresh spree of robberies with Charley and Bob Ford two of the main gang members. After a few successful years, the James brothers were once again the main target of Crittenden. Although the law barred him from placing a large bounty on the head of the brothers, he convinced corporations to put up a total of $10,000; $5,000 for each brother.

On June 3, 1882, in St. Joseph, Missouri, Jesse read the paper and learned that a gang member named Dick Liddil had confessed to murder. He was suspicious that the Fords didn’t tell him about the news and eventually believed they had betrayed him. He was correct as the Fords wanted the money and were prepared to kill to get it. The story goes that Jesse laid his guns on the sofa, went over to a picture and stood on a chair to clean the dust off it. Bob Ford saw his opportunity and shot Jesse in the back of the head.

The Fords were initially tried, found guilty of first-degree murder and sentenced to die. However, they were pardoned and fled the state after only receiving a small portion of the reward. After spending his life coming face-to-face with death on numerous occasions, Jesse James died with his back to his killer in comfortable surroundings. His brother Frank was acquitted and avoided prison. He died in 1915. Charley Ford committed suicide in 1884 and ‘the coward’ Bob Ford was shot dead by Edward O’Kelley in 1892.