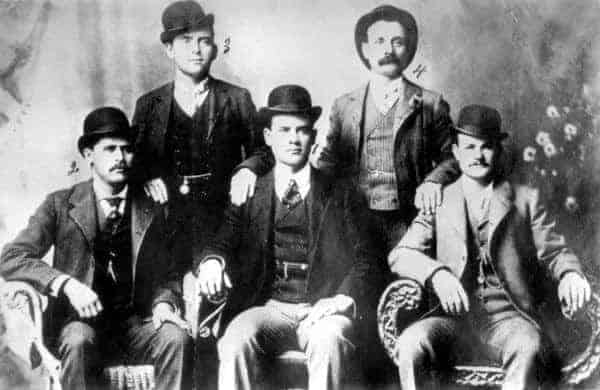 Butch Cassidy is one of the most well-known criminals of the Wild West. Most often we hear of him in the same sentence with “The Sundance Kid”. Born on April 13 1866, Robert Leroy Parker was the oldest of 13 children born to Mormon parents in Utah. Parker would befriend a local scofflaw named Mike Cassidy. Cassidy would end up giving Parker a gun and teaching him how to shoot it.

Parker started small in his local town with the direction of Cassidy, but would eventually be forced to leave home after being suspected of committing several misdemeanors.

In 1889, Parker, now going by the name George Cassidy, committed his first serious crime. He robbed a bank and made away with nearly $20,000. In order to stay out of the sights of the law that was now hunting him, he started to work in Rock Springs, Wyoming in a butcher shop, which would lead to him taking on the name that would be one of the greatest aliases of all time, Butch Cassidy.

In 1896, after serving two years in jail for stealing horses, Cassidy brought together a small group of outlaws that would eventually go by the name “The Wild Bunch.” One of the members of this gang was Harry Longbaugh, or as we know him, “The Sundance Kid.”

For the next few years, Cassidy led the Wild Bunch in mostly successful highway and train robberies. They were most well-known as train robbers, sometimes being recognized as the “Train Robber’s Syndicate”.

By 1900, railroad companies had had enough of Cassidy and his gang’s robberies, and started to post armed escorts on most of their trains. In 1901, Cassidy escaped to Argentina with The Sundance Kid. In 1904, after three years of farming on a ranch in Cholila, Cassidy and Longbaugh started their crime spree once more in Argentina, Chile, and Bolivia.

It is unknown how Cassidy eventually died. The most accepted rumor is that he was gunned down by Bolivian Troops in 1908. However, there is other testimony that both Cassidy and the Sundance Kid had returned to the United States at some point and had settled down. Which rumor is true, we may never know.